5'11" PG Ronnie Johnson, brother of current Boilermaker Terone Johnson, has made his commitment as the fourth member of an already talented 2012 recruiting class.

Johnson, a left handed pass-first guard, projects to be a very capable ball distributor at the next level as he possesses excellent court vision and a high basketball IQ. Additionally, he is a very capable scorer, which has been an issue for Purdue's ball handlers in recent years.

His stats might not reflect that due to the team he's on, but he has shown a consistent ability to produce when needed. The only knock I have is he needs to get a little more comfortable driving with his right hand (as you can see in the video below).

He is also a very capable defender given his smaller stature. Just recently, he effectively shut down IU commitment Yogi Ferrell in an AAU game. With a little bit of added strength, he should be able to emulate Lewjack's ability to play in opposing guards' pockets. This shouldn't be overlooked as pressuring opposing point guards is paramount to successfully executing Matt Painter's defense. Above all, Johnson will understand this concept from day one in West Lafayette.

A fitting comparison for Ronnie Johnson (admittedly made by Dan Dackich) is that his style compares to Mike Conley Jr. I don't think Dan means that Johnson is or will be as good as Conley Jr., but they both have a penchant for making smart plays that make everyone around them better.

And like Conley Jr., Ronnie Johnson has always been surrounded by elite talent around him. His first two season he was behind Indiana Mr. Basketball runner-up Terone Johnson and he is classmates with the high caliber scorer DeVante Smith-Rivera his entire career.Throughout his career at North Central High School, Johnson's contributions were consistent and people just began taking notice

Johnson will arrive with a firm understanding of the team concept and happily find his role, in whatever capacity, with the team.

Johnson chose Purdue over offers from Butler, Illinois, and a host of mid-major teams. If he continued his recruitment through the summer, he'd likely have a lot more options to choose from.

Ronnie Johnson's commitment will likely make the scholarship situation a popular topic of discussion. Purdue is now over-signed by one scholarship, but it won't impact the team until the '12-'13 season. If there are no roster moves following the spring semester, we can all look forward to annoying (and divisive) speculation on what will occur. 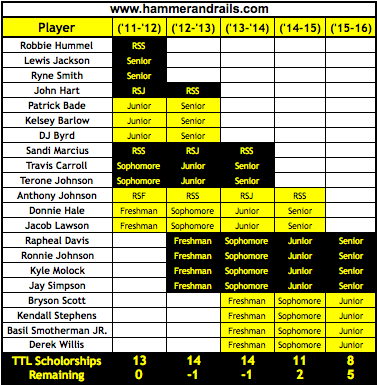 Let's let Matt Painter focus on that aspect so that we can focus on the excitement of the great talent that is heading to West Lafayette for the next 3-plus years!

The truly important and exciting aspect of RJ's commitment is that there is a good chance Larry Clisby grudgingly mutters the following phrase:

"Johnson brings the ball up. Pump fakes to his left and passes it to Johnson. Johnson puts the ball on the floor penetrates the late and kicks it out to Johnson for three! Good!"

We will all remember where we were when we witnessed the Johnson Tri-fecta.