With the addition of Derek Willis, this seems to be a good time to revisit the scholarship graph. 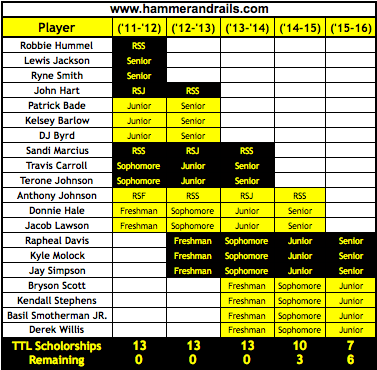 Unfortunately, what the scholarship graph indicates does not agree with the players Matt Painter has been targeting as of lately.

However, on paper, it's very much black and white despite all the confusion and ambiguity that seems dominate the subject. Purdue has maxed out their scholarships up until the class of 2014. Period.

Painter can obviously oversign by one, but as I said before, Donnie Hale was an exception to the rule. The caliber of players that Purdue is currently targeting will most likely not want enroll in Prep school.

It should be known that Painter was up front with Donnie Hale and he was made aware of the possibility of prep school going into the offer. It was not something that was forced upon him later down the road. I don't think Painter would risk his reputation forcing it on a player to make room if it wasn't already agreed upon at the time of the offer. And there are no indications that any of Purdue's current commitments have received any such stipulations.

Despite the plain and simple fact that Purdue is out of room, Painter and his assistants have been heavily recruiting several players from the class of 2012. The staff has been activily recruiting A.J. Hammons, Gary Harris, Ronnie Johnson, and more as well as entertaining transfers such at Brandon Wood among many others circulating the rumor wires.

One thing to keep in mind is Purdue has been very lucky on the attrition front for the last few years. Attrition is a pretty normal occurrence for all successful programs and Painter has done an excellent job keeping his teams in tact. In preparation for possible attrition, realized or unrealized, Painter must keep recruiting despite the lack of current availability.

With that said, based on Painter's recent activity alone, it's pretty easy to speculate that there will be an opening sometime in the future. Specifically, Painter's scholarship offer to PG Ronnie Johnson, as well as the mutual interest of senior Brandon Wood (and other transfers) points towards the fact that Painter, at the very least, is certainly entertaining roster changes in the next couple season.

I am not going to speculate who, when, how or why because I don't know and  we've all gone through all the possible scenarios a million times. The fact is we have no idea and all we can do is follow the erratic footsteps of Matt Painter and speculate what's going on behind the scenes.

But for my sanity, I'm not going to try to make sense of it until either someone commits or someone leaves.

Matt Painter has some great teams for the next 3 seasons and I'm perfectly satisfied where we are now anything else will...make things interesting.