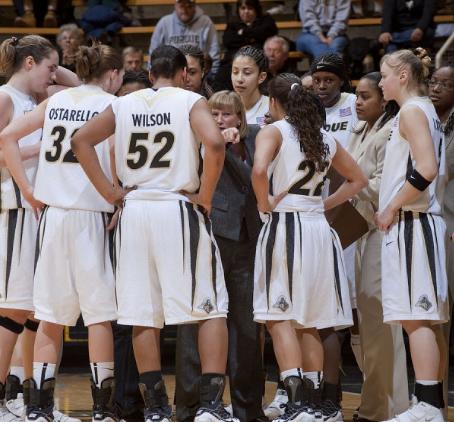 I'll run down the individual games a bit later, but first I want to step back and take a look at this season as a whole.

So, we earned a bid.  What's that mean?  Frankly, it means this is a truly extraordinary team. At the beginning of the year I predicted a decent NCAA seed and a top 5 finish in the Big Ten.  Then we lost our PG 4 minutes into the season to a torn ACL.  Drey nearly died of meningitis.  Ashley Wilson was academically ineligible for the heart of B10 play.  Even Brittany struggled all season with a nagging back injury.  By all rights, this team ought to have folded like a cheap tent weeks ago.  But they didn't.  They got a 9 seed and finished one game out of a 4-way tie for third in the B10.

There were times this season when I was critical of this team, perhaps too critical.  We were starting a freshman at point, ateammate, to say nothing of a friend, nearly died, we had no seniors....everything militated against a solid season like this.  The resiliency of this team is astounding.

I'll leave things there for now, because the season isn't over.  After the jump, I'll look at how we locked up our bid.

These were very similar games.  A pissed-off good team ran over a less talented opponent at home.  In aOSU'scase, they were far more talented than their record shows, and were due to go off, and go off they have.  They have since gone on a run that has carried them to the BTT title, and may go deep into March.  As for us, we were ticked at losing so badly and just destroyed an inferior Illinois team.  As for individuals, only Courtney seemed to play well against aOSU, scoring 19 and handing out 4 assists, although Sam Woods had her best game of the season with 10 points.  Agaisnt Illinois, on the other hand, everyone was on fire.  5 players reached double figures, while Courtney had 7 dimes to go with her 10 points.  Antionette scored 21 off the bench and also recorded 5 assists.  Best of all was Drey, who scored 23 on absurdly efficient 8 of 10 shooting while grabbing 6 boards and passing for 4 assists of her own.

This was a typical B10 grinder, and the Boilers did an excellent job of winning with defense.  Minnesota shot just 28.6% from the field.  This game was actually much closer than it looks.  The winning margin of 10 was the largest lead of the game, as we extended it via free throws in the final minutes.  Our two big guns were, well, big in this one, as Brittany went off to the tune of 27 points, including an icy 12-14 from the line.  Drey was the only other Boiler in double figures with 10, but she also pulled down 12 boards for a double-double.

Unfortunately, the women could not complete the daily double over aOSU.  On the same day the men upset #1, they led for almost the entire game, only to lose on a 3-pointer with just .7 seconds on the clock.  I would bemoan the unfairness of it all, but this game never really felt in hand.  We got into a basket-trade with them in the final 4-6 minutes instead of sticking to our defense, and it cost us.  A 10 point lead with 10 to go dwindled to 5 at the 2-minute mark, and they just kept grinding it down.  I am fully confident that a single stop anywhere in the final 4 minutes wins us the game, but we just did not step up and get it, and they finally caught us at the end.  We did not play badly, and Drey was magnificent again with 25 and 9, but in the end we were just a little short.

This was a game of runs as Purdue jumped out to a 33-13 lead, only to see it immediately cut to 33-21 at the half.  Penn State is too good of a team not to make a run, and they got back into it with a 15-0 streak to pull within one early in the 2nd.  Momentum then whipsawed the other way as Purdue ran off 9 in a row to get the lead back to 10.  The teams traded a couple baskets until Penn State strung together 6 to get within one at 50-49 with 3:48 to play. Purdue then went on a different kind of run.  Remember how the OSU game could have been won with a single stop?  We got 6.  In a row.  Penn State did not score again, and Brittany added a free throw to provide the final margin.  Drey was absolutely unstoppable on the boards, recording yet another double double with 12 and 16(!), while Brittany chipped in her usual 14.

Our two tourney games proved the axiom about beating teams three times in a season.  We managed it against a far inferior IU team, but could not handle a rested Penn State team a third time.  We simply ran out of gas in the 2nd half.  Such is life when the B10 demands back-to-back games for one team and not the other.  Our two horses carried us in the IU game: Drey had 21 and 6, Brittany had 23, including 12-12 from the line, several of which sealed the game.  Against PSU, our three leading scorers were in double figures, but not much else worthy of note happened, as we were clearly exhausted by the end of the game.

Well, now we go to Connecticut to face Kansas State, and the winner gets a virtual home date with the mighty UCONN Huskies.  I won't go so far as to predict an upset, but I do know this.  We are playing well right now, and I think we can beat KState.  As for UCONN, I think their 'aura' intimidates teams.  If we refuse to let that beat us, then we have a chance to take them down.