It's Hate Week! The Gene vs. Bobby Years

Share All sharing options for: It's Hate Week! The Gene vs. Bobby Years

Growing up in Indiana during the peak of the Gene Keady vs. Bobby Knight era I learned from an early age what it was like to be an outsider. The 1987-1988 period was probably the peak of the rivalry, with the Hoosiers reigning as the defending National Champion and Purdue on its way to a #1 seed and Big Ten Championship. It was the highest that both teams would be during the Gene vs. Bobby era at the same time. Indiana was a championship team, and Purdue was on the very short list of teams to replace them (and might have if they hadn't crapped the bed in the Sweet 16 vs. Kansas State). Those two coaches defined what the rivalry was and in a way, still is. You were either for Gene or Bobby. They only needed one name like they were Brazilian soccer players or something. Bobby had the titles, but Gene represented grit and defense. Bobby is a Legend with a capital L, while Gene has the unfortunate moniker of Best Coach to never reach a Final Four. 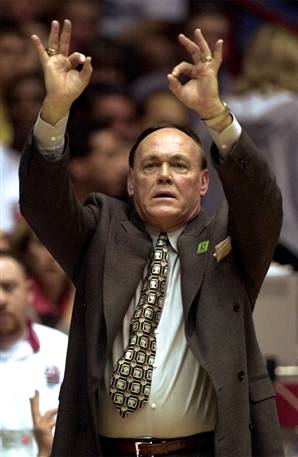 Elementary school kids in Indiana during the late 80's chose sides based on these two men. It was Crips vs. Bloods in the Heartland.

At the time, I was in the second grade. Naturally, the biggest rivalry in a basketball mad state trickled down to my class. We would sometimes separate off in to groups based on what team they watched. This is where my Gold and Black blood runs deep. Easily 80% of my class would go off into the Indiana group. Only a handful of kids would pick Purdue, and I was always the first. The other Purdue "fans" were more hesitant than me (and they often included a very cute girl or two) but I would be the leader of the group. Naturally this led to some derision on the playground, but I always stood tall because I was raised as a Boilermaker. There was never a question of switching sides under the guise of gaining stature on the second grade ladder of popularity. This is where I learned the phrase, "Hoosier by birth, but Boilermaker by the grace of God."

I think that situation is a microcosm of the rivalry if you grew up in Indiana. Most people picked Indiana because they were the more visible franchise with their titles and history, but the Purdue fans were more connected to the school and defended their allegiance fiercely. My connection was being the son of an alumnus. That is what makes this rivalry so great even if only one game in the past 10 years has mattered anything on a national scale. Purdue fans in general have had a deeper connection for longer to the program and have always had to defend themselves against overwhelming numbers of the opposition when some picked their allegiance based on living in Indiana. For example, one of my closest friends is a big Indiana fan, but no one in his family attended the school. His family even had an IU bathroom with five miniature banners on the wall (that I always teased I would used if they were ever out of toilet paper in there).

I remember more Indiana fans trying to sway me to their side growing up than Purdue fans backing me. Some very important people in my life such as my eye doctor (since I am virtually blind without contacts), my basketball grandmother that recently passed away, my classmates, my dad's business associates that were doctors were all Indiana fans. They all tried to sway me. For example: my eye doctor in his exam room had IU, Purdue, and Notre Dame stuff on the walls. The IU one was right above the eye chart, and every exam he would try to get me to look at the IU one, but I would tell him I would rather look at the Purdue one farther away. And this was at age 7 when I first started wearing glasses.

This rivalry still goes deep in this state, as I have seen from the various shots fired on message boards and via Twitter of late. Purdue fans enjoy being on top right now, and we're annoyed by the cries of "Your run will soon be over" that are often followed by the 2012 class information. On a national scale, there is no question Indiana has the lead with a 5-1 edge in national championships. I cannot deny that. Head-to-head Purdue holds a substantial 110-84 edge, however.

Nothing defined the rivalry more than Gene vs. Bobby, though. Even that has no clear winner. On the court, Gene won 21-20. Officially, Bobby won 21-20 because of a Purdue win vacated when Luther Clay, who was later declared ineligible, played one minute and scored one point played in one game. The game was decided by more than a point, so I still consider it a Purdue win.

So let's look at the Gene vs. Bobby era today and see some of the best games:

I am contractually obligated as Purdue's blogger to put this clip in before discussing hte history of the series.

January 31, 1981 - Indiana 69, Purdue 61 in Bloomington - The Gene vs. Bobby Era started with a bang. Even though both teams were unranked, Purdue was coming off of a Final Four appearance and Indiana was on its way to a surprise 4th National Championship.

February 7, 1981 - Purdue 68, Indiana 66 in West Lafayette - This established a precedent that the visiting team winning in this series would be rare. As happened many time during the series, the teams split with each winning at home.

January 14, 1984 - Purdue 74, Indiana 66 in Bloomington - This is Gene Keady's first win in Bloomington in the series. Unfortunately, it was another year where Purdue underperformed (losing in round 2 as a 3 seed) while Indiana made the Elite 8.

January 31, 1987 - Indiana 88, Purdue 77 in Bloomington - According to Purdue's media guide, Indiana was unranked and Purdue was ranked 4th, but this can't be accurate. A month later when the teams played both were ranked in the top 6.

February 26, 1987 - Purdue 75, Indiana 64 in West Lafayette - This is the highest ranked both teams have ever been when they have played. Purdue was 6th while Indiana was 3rd. The split was perfect, as both teams shared the Big Ten title. There was potential for a rematch in the National Title game, but Purdue was upset 85-66 as a #3 seed in the second round by Florida. Had they won, they would have faced Syracuse in the Sweet 16, who went on to lose to Indiana by one in the championship.

January 30, 1988 - Indiana 82, Purdue 79 in Bloomington - This likely denied Purdue its first ever #1 ranking, as the Boilermakers were ranked #2 at the time. They would also be #2 weeks later during the victory in West Lafayette. This was likely Gene Keady's best team and best shot at a National Championship, but they fell short in the Sweet 16.

January 13, 1990 - Purdue 81, Indiana 79 in Bloomington - This overtime victory allowed Purdue to sweep the season series for the first time since 1985. It also lead to this golden speech:

"I'm sick and f***ing tired of losing to Purdue!" classic!

January 16, 1996 - Purdue 74, Indiana 69 in West Lafayette - This is the infamous Luther Clay game in question. He scored one point and played one minute, but Purdue won by five. Case closed in my book. The funny thing is that the Big Ten has not ordered us to take down our Big Ten championship banner from that season.

February 18, 1997 - Purdue 89, Indiana 87 in Bloomington - Two Words: Chad Austin. Purdue wins it's fourth straight in the series for the only time under Gene Keady when Chad Austin hits a very Keith Smart-esque shot to win in overtime. I skipped over some other games to this one because it was so good to win back-to-back games on their floor. The four straight wins also marks the only time either team won four in a row during the Gene vs. Bobby era. That's just how even it was.

March 6, 1998 - Purdue 76, Indiana 71 in Chicago - Since the games decided on the court were 20-20 when played at Assembly Hall or Mackey Arena, let's use the one neutral site game played between Keady and Knight as the deciding factor. This is the only time Purdue and Indiana have met in the Big Ten Tournament. I'm sure some IU fans don't count this because Knight hated the idea of the Big Ten Tournament. This is the only game in the last 31 years played outside the state of Indiana between the two, and one of just three ever. Purdue's 76-69 win in the 1980 NCAA tournament and Indiana's 53-52 win in the 1979 NIT championship are the other two.

January 16, 1999 - Indiana 87, Purdue 76 in West Lafayette - This game is significant to me because it is the first time I ever got to attend a Purdue vs. Indiana game. I was a freshman living in Cary Quad and I remember it was the sole reason I got basketball season tickets. Purdue was ranked 13th, but lost to #23 Indiana. We struggled to a 7-9 Big Ten record and barely made the NCAA Tournament, but shocked many by making a run to the Sweet 16. I should also note we beat my wife's #2 seeded Miami Hurricanes in round 2. This is also Bobby Knight's last win in West Lafayette.

February 9, 1999 - Purdue 86, Indiana 81 in Bloomington - This is significant because it marks Gene's final win in Bloomington and our last win at Assembly Hall until last season.

January 22, 2000 - Purdue 83, Indiana 77 in West Lafayette - We didn't know it at the time, but this would be the final Gene vs. Bobby game in Mackey Arena. Thanks to Brian Cardinal, we upset the 11th ranked Hoosiers for the only Purdue victory over Bobby Knight I witnessed in person.

February 29, 2000 - Indiana 79, Purdue 65 in Bloomington - This is the final Gene vs. Bobby game, giving Knight a 21-20 edge if you believe the Luther Clay forfeit holds. Sadly, it is the first of five straight losses for Purdue in the series and we would go 3-11 in the next 14 games in the series. Obi-Wan Kenobi would refer to this as the Dark Times. It is also the final game where both teams were ranked until Kelvin Sampson's final game in 2008 (which is also Indiana's last win in the series).

According to Purdue's information guide the teams met 9 times while both ranked in the top 25, but I don't think this is accurate because the January 30, 1988 game had to have both teams ranked. The same is true for the January 31, 1987 game where Purdue does not list Indiana's ranking, but they were eventually a #1 seed in the NCAA Tournament. The 41 games between Keady and Knight represent the golden age of this rivalry and exactly why both groups of fans currently care so much about the games. The longest winning streak by either team was a mere four games, and several were hotly contested overtime affairs.

When I hear fans of this rivalry on both sides they talk about the Gene vs. Bobby era in wistful tones. Sadly, the rivalry has not been to these heights in 11 years (save for the Sampson game) because of Purdue's swoon under Keady and Indiana's swoon due to its NCAA infractions under Sampson. Can we ever get back to it? That is a question for Indiana to answer, because we're holding up our end of the bargain right now.