Share All sharing options for: Almost Time For Boilermaker Baseball

Yes, the snow is still melting outside my window, but the lure of 60 degrees today reminds us that spring is almost here. That means it is time for some Boilermaker baseball. This will be the final season for Purdue at the current Lambert Field, as the new Lambert Field will be ready to go next season just as the Big Ten gets Nebraska. It is also the final season without a Big Ten by week. Since Wisconsin lacks a program, the inclusion of the Cornhuskers means an 11-team baseball league. 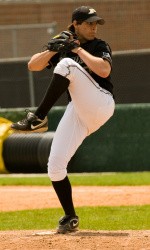 The facility improvement should help the program a great deal in the future. Lights will allow for night games and the possibility of postseason tournaments. In the unlikely event that Purdue really improves on the field it also increases out chances of hosting an NCAA regional. It is not unheard of for a Big Ten team to host. Ohio State, Michigan, and Nebraska have been recent hosts. It is merely very difficult.

Generally, the Big Ten is expected to be a league this year where teams take a small step back, but they are poised to make a big leap forward in the future. College Baseball Today, one of the top sites that covers the sport, still views the Big Ten as a mid-major league. They are right too. The conference rarely gets more than two teams into the NCAA Tournament and often gets only one. It is also rarely a threat to reach Omaha, and no conference team has done it in over 25 years (though Nebraska has recently).

Purdue is generally considered a team that will finish out of the top 6 and therefore miss the league tournament. College Baseball Today predicts an eighth place finish and the coaches did not pick Purdue as a top six team, either. The loss of ace pitcher Matt Bischoff, who was nearly automatic as a Friday starter last season, is expected to be too much to overcome. He helped make sure Purdue had a chance to win the league going into the final series at Iowa. The Hawkeyes then swept in Iowa City and then out of the Big Ten Tourney

Cameron Perkins - Third Baseman - Perkins, along with sophomores Kevin Plawecki and Brad Schreiber, are considered some of the top prospects in the Big Ten for the 2012 class. He batted .3438 last season with 34 RBIs.

Kevin Plawecki - Catcher - As a freshman Plawecki was only Purdue's best hitter, batting .343 with a freshman record 53 RBIs. Defensively he will look to handle a pitching staff that needs three quality weekend starters.

Brad Schreiber - DH/RHP - Schreiber made the conference's all-freshman team as a pitcher last season with 17 appearances. He also was a DH for 17 games. He earned a pair of wins and saves on the mound and was particularly effective in Big Ten play with an ERA under 3.

Purdue begins the season for the third straight year in the Big Ten/Big east Challenge, where Purdue is 1-5 all-time over the past three years. These games will be streamed live on the internet if you're interested in viewing. Purdue opens Friday night against Connecticut, then will play Notre Dame and Pittsburgh. This is an excellent chance for Purdue to get some big wins to start the season. Connecticut was a regional host last year and is expected to be a top 8 national seed this year.

After playing in Florida the Boilers will swing through Kentucky and Tennessee fort heir next 16 games, playing a nice balance of teams. Louisville, and Vanderbilt are the best teams they will face. Purdue's first home game is on March 22nd against Illinois State, one of the top teams in the Missouri Valley Conference. Purdue conference opening series is up in the air the first weekend of April as league favorite Minnesota was supposed to play its season at the Metrodome, but needs to find a new home. Purdue only has 18 home games, but its last eight are at home, with series against Illinois and Iowa. Three of Purdue final four Big Ten series are at home.

This is still a very young team with a pitching staff that had a nasty habit of blowing leads for its starters. They are probably about a year away from contending for the Big Ten crown again, but if the pitching can come together Plawecki and Perkins have enough people to get on base so they can drive them home. Purdue stole 90 bases last year, second in the Big Ten. They should be able to score some runs. Can our pitching stop the opposition from doing so?

Purdue's schedule is the toughest it has been in years with UConn being its highest ranked opponent in quite some time. If Purdue can win that one it will really give them a boost, unfortunately, Minensota is the league favorite and they are still projected as a 4 seed in a four-team regional. That likely means Purdue will have to make, and win the Big Ten Tournament to reach the NCAA's for the first time since 1987 and just second ever. The 102 year drought since Purdue's only Big Ten title in 1909 likely won't end, either.