Bruce Weber, will you be my Valentine('s Day Massacre)?

Share All sharing options for: Bruce Weber, will you be my Valentine('s Day Massacre)?

I have yet to write a column here at Hammerandrails, but I figure now would be a good time to start. Hopefully I'll be writing more frequently, as this is a great time to break the ice. But for now, I'll spare the formal introduction and get straight to the point. 80-pounds ago I was a lot of things. I was in high school, lived in Illinois, was an athlete of sorts and was a die hard Illini fan. About 140-pounds ago I was introduced to the Orange and Blue and was instantly hooked. I lived and breathed basketball as I still do, except back then I could actually play it. I idolized the players as they came and went, I wanted to be just like Dee Brown. Luckily, I was able to attend all but two home games during the spectacular '04-'05 Illini Basketball season. I watched live, one of my favorite basketball teams of all time come back and beat Arizona 90-89 in OT.  (Coincidentally this was the first time I dropped the "F-bomb" in front of my parents.)

Arizona Vs. Illinois (via beck23erz)

I was so happy that 'my boys' were going to the Final Four; I even dislocated two fingers as Luther Head stole the ball sealing the win with seconds left on the clock...But, as all good things must come to an end, Sean May and his XXXXL shorts absolutely destroyed the Illini in the Final. I was devastated. I wanted Sean May to step on a conveniently placed land-mine on the way back to the locker room. I was made fun of for days on end because I thought the Illini could actually pull out the win and become National Champions. Luckily for me, he and his gigantic trousers have led his awesome talents far away. Far away to Eastern Europe to play for the Fenerbache Ulker Basketball team...whatever the hell that is.

Now, 80-pounds later. I'm wiser than I once was. I chose Purdue. I'm proud to say I'm a Boilermaker, I'm almost glad that Sean May and his monstrously huge panties made the Illini look like a bunch of sissy-prepubescent-girls-at-their-first-slumber-party. My first Purdue-Illini game as a boiler fan in Assembly Hall was awesome. We had previously clonked the Illini on the head at Mackey and were rolling strong in the Big Ten. Nothing could stop us, and neither could the Illini that day. I stood as tall as I could, decked out in my Robbie Hummel jersey, and B'dTFU like none other. We won, 83-75, and the Illini were subject to almost certain doom.

That day, for the first time in a long time, I witnessed something profound, the Gene Keady with-in Bruce Weber. 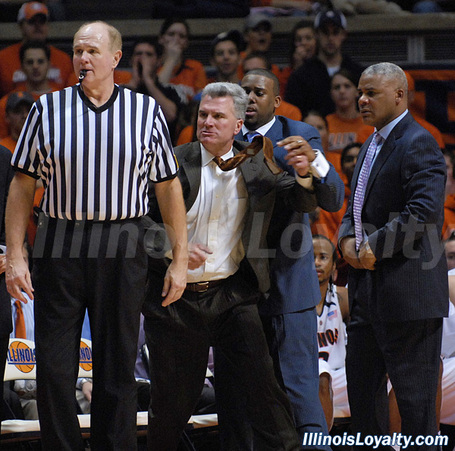 Although the Illini  haven't been playing like the Illini I used to know, they're still something to be afraid of. As long as the flame of Gene Keady burns inside the red-meat-infested-bowels of Bruce Weber, the Illini will always be a threat. Sure, they coughed up the win to UIC earlier this season. (How embarrassing, could you imagine losing to Calumet?). Sure, they GDB-style-choked against IU, but after all IU does have the invincible Ms. Jordy Hulls. And again, the Illini couldn't finish as they pulled out limp during their Northwestern fiasco, but that doesn't mean that they can't gather themselves and really surprise us this weekend. Let's take a highly empirical and minimally statistical approach to what our boys will have to do on Sunday. Out of the 10 or so Illini games that I have watched this year, this is what we should look out for.

#1 - Demetri McCamey - I've been on his train for years. I've been saying he's arguable one of the best PG's in college hoops and he is certainly proving that so with a struggling Illini squad this year. The kid is unconscious from behind the arc and can distribute the ball like Jenna Jameson. Unfortunately for the Illini, he's either on or off. Let's hope Barlow can guard with his feet and keep him under wraps. I'm not sure if LewJack should be on McCamey or not, the height difference worries me. If Barlow moves to Mike Davis, Smooge will do a great job keeping McCamey's NBA-esque talents on the down-low.

#2 - Poor man's Rob - Mike Davis - I've never liked Mike Davis, he's the on again-off again, in again-out again, up and then down again Sneetch on the Beach; we never quite know if he'll show up with one star or two. He is the poor man's Rob. He's their second best player and can definitely fill up the highlight reel with alley-oop slams however, his inconsistencies will shine with our defense. Unfortunately for me (us), I can't think of someone that matches up well with him. Mike Davis is very athletic and likes to attack the rim. I'm banking that his 16-footer will be off on Sunday, and that a rotation of Bade, Carroll, and  Barlow will slow him down.

#3 - Jereme Richmond - I don't like him. The Illini fans scream and shout that he's the next Scottie Pippen, but I disagree. He is good I admit, but I just don't like him. He fills in the holes and does what needs to be done. He can score in the post, knock down the 18-footer's and can rebound pretty well. He's still developing and could be guarded by a couple of boiler's, I see him matched up with DJ. In two years, he should be great, but I still wont like him.

#4 - D.J. Richardson - This kid is one hell of a guard. I like his play style, very similar to our very own Ryne Smith. He's a decent on the ball defender and can knock down three's like Steve Kerr. As long as Ryne can navigate the tree's and dodge Quasimoto's hump, we should be ok. I also see LewJack spending some time on Richardson, his speed and size pair up nicely with this shooter.

#5 - Mike Tisdale - The only "7-footer" I know that slouches to 5'11". He started the season as JJ's #1 adversary in my book. (Sullinger was unproven in my eyes back then.) Unfortunately for him, while he was packing down the Cheeto's, JJ was lifting weights and watching films, becoming the best big man in college basketball. We still have to look out for him. He can block shots, fill the lane, and has a range just like JJ.

Honorable Mention - Bill Cole & Brandon Paul - These guys contribute, however, have yet to show that they are contenders. I don't see much more than their everyday, average "I'm a Div-1-Baller" games this Sunday. Brandon Paul is speedy and can drive the lane similar to LewJack. Bill Cole is the poor man's Mike Davis with a Howitzer for a 3-ball, somehow he still shoots the damn thing around 40% from behind the arc. We should look out for his mid-range jumper.

Now, even more briefly, as I have to drive JordanLegend to class in 10 minutes, this is what we have to do.

#1 - Don't make stupid mistakes. We need to prove that we can win on the road.

#2 - Don't fall for the infamous Illini ball screen gag. It's killed us in the past.

#4 - Feed the post. Although Tisdale is long and stuff, that doesn't mean that he can stop what JJ has been working on this season. With a relatively weak showing during the IU game, watch for JJ to come out with a sense of uncultured radiance. I'd assume Webby has watched that footage and will see that triple-teaming JJ will eventually slow this Boiler squad down. That is, until Painter calls a time out and makes things all better.

#5 - Feed #33. Remember the days of Jeff Jordan? I sure do. If you don't let me enlighten you. The Illini would be nearing the end of a close game and Demetri McCamey would make a mistake on defense and blow the lead. From then on, every time that Weber could sub out McCamey on the defensive end, he would. McCamey is an offensive threat, that's his first priority. Fortunately for us, his defensive skills have only picked up a little bit. Jordan was a much better defensive option for Weber, again, fortunately for us, Jordan brought his talents to "South beach-ish." As I assume either Paul, Richardson, or McCamey would be on E'Twaun, none of them have the talents it takes to stop his offensive onslaught.

With all that said, I predict a great game for Boiler Nation. Purdue 70 - Illini 62. Weber will throw a couple of fits, and deep down, in his heart of hearts, knows that he learned everything from our coach, Gene Keady. Therefore, Weber would do our Gold and Black proud by being our Valentine('s Day Massacre) victim.