Share All sharing options for: Taking Care of Business - The Early Non-Conference Recap 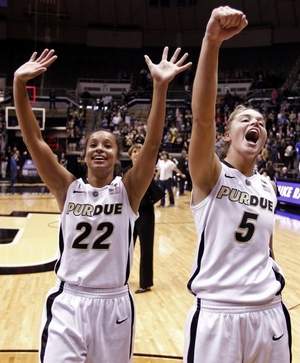 Last week I profiled some of the women's basketball team, but unlike your normal (read: punctual) player profiles, mine are done after the season is already underway. Which of course begs the question, how is said season going? The short answer is, quite well. The girls handled a D-II ranked Ediboro 88-73 in the exhibition, then ran over IUPUI 75-45 in the opener. They squeezed by a better-than-you'd-think Bowling Green on the road (whew), then blew out Tennessee-Martin and Chicago State by scores of 65-39 and 76-49, respectively. Their next two games were played in Cancun, as the Boilers made the trip they were denied last year by Drey's illness. Facing Tulane, the ladies won comfortably against Tulane, 61-48, before getting into a knock-down, drag-out OT war with Kansas State that finished just 46-42.

Neither of these games was especially close. Edinboro is a good D-II team, but they made a few shots late to close up in the final tally. Moses went off in this up-tempo game to the tune of 25 points, which isn't really a surprise, because her speed and aggression on the break can really light it up in a fast game. KK also had 19 and 4 in this game. One other thing needs to be said about this game: HOLY REBOUNDING! The team came up with an absurd 57(!) rebounds in this contest. Any ball in play belonged to Sam Ostarello, with her 15 boards leading the team and completing her double-double with 12 points. No one else was above 4, although 6 players reached that number. The IUPUI game was even more of a laugher. The Jags shot just 26.2% and were never really in it. KK had 6 steals to go with a team-high 18 points, Rayburn tallied 14 points and 4 dimes, and Sam O swatted 4 shots to go with 8 points and 5 boards.

This one was closer than it should have been, and it's concerning coming from a team that has had major road woes in the recent past. On the other hand, BG isn't a bad team, and they were likely hyped up to open their new arena, so ther is that angle. Also, they were on the short end of a 19-9 FT disparity, which doesn't help at all in these low-scoring grinders. At any rate, the Boilers found a way to win, which is all that really matters at this point. Basically this was just a solid performance on all counts, with the exception of one. The turnover bug that has plagued this team was back in this game, to the tune of 23. KK Houser had 10 all on her own, which is a MAJOR concern from your PG. She's really struggled with TOs this year, and it's beginning to affect her mentally. Rayburn led all scorers with 18 points, and she also co-led a good rebound-by-committee game with 6. Moses tallied 13 point, 6 dimes, 5 boards, and 3 thefts in a fantastic performance all-around performance, and she also came up with the key play of the game. Facing a 1-point deficit in the final seconds of the game, she successfully pulled off the old inbounds-pass-off-their-back trick to get herself an easy layup that was the decisive score.

Both these games were pretty much solid domination by the Boilers. Basically the entire roster saw significant time in both games, and most contributed in one way or another. Really, that's all one can reasonable expect when one team is so clearly better than the other, as it was in both these games. Purdue played stifling defense in both these games, as UT-Martin in particular came in averaging 80+ per game and just got shut down. They forced 20 and 28 turnovers respectively, and while they gave back 23 against Chi St, they only had 7 against UT-Martin, proving that this team CAN take care of the ball when it's playing well. Rayburn, Moses and Ostarello all reached double figures against UT-Martin. Brittany also had 13 against Chi St, and KK Houser tallied 11 while also piling up 7 assists. There isn't much else to note individually out of these games, except for all 5-foot-6 of Courtney Moses leading all rebounders in the UT Martin game with 8.

The Boilers finally made their long-delayed trip to Cancun. This trip was postponed last year during/following Drey Mingo's life-threatening bout with meningitis, but thankfully this year nothing of the sort happened, and the girls got to enjoy some nice weather for Thanksgiving. As far as the games go, well, Purdue had TO issues (27!) again against Tulane, but made up for it with again-excellent defense (25 TOs by Tulane, and nothing but two FTs for the final 7:39). They also crushed Tulane on the glass, 42-29. Brittany had 20 plus a healthy 6 rebounds, and KK had 15 points and 5 assists, but again had 6 TOs. Sam Ostarello missed out on a double-double by only a point with 9 and 10.

Kansas State is a familiar foe from last season, as the Boilers knocked the Wildcats out of the NCAA tourney in a hard-fought game. This one was no different, as both teams play especially hard-nosed defense. KState shot just 29.2%, but the Boilers barely edged them at 29.5%. This was a see-saw game for most of the contest. Purdue's lead peaked at ten briefly late in the first, but it remained close after all the way to the end...obviously. Brittany led the team with 16 points and 8 rebounds, while KK chipped in 11 despite once again having turnover problems. Sam O again pulled in double-digit rebounds along with 7 points, including Purdue's only FG of the 6-2 overtime scoring.

The team is not in the midst of the hardest 3-game stretch anyone in the country will face. They traveled to face #6 Duke before returning home to face the defending national champs, the #4 Texas A&M Aggies, and then Notre Dame on Saturday. I will have a fuller wrap for all three once that stretch completes, but so far the team has lost a tough one at Duke that saw both teams have opportunities to win the game, but the home team closed it out. The team bounced back with a great win against the Aggies, though, hanging tough with A&M's best shot during the first before closing it out with a fantastic second half. Now they have a week off to rest and prepare to avenge the football team's loss to That School in South Bend. When I first saw the schedule, I was hoping to get one of these games, 2 would have me thinking Big Ten title, and 3 for 3 would have me dreaming of a Final Four. Right now, they've got the one. So go out there and play like you have nothing to lose, and kick the living crap out of the Irish.