A bowl win is a bowl win. After Purdue started its postseason history with a 6-1 streak following the 1998 Alamo Bowl, postseason wins have been hard to come by. For awhile we were good at getting to the postseason, but once there, we didn't do much. Our last two postseason trips have been to Detroit against a MAC team, which is hardly what Big Ten teams play for, but we're now 2 for 2 in the Motor City.

Sure, the 37-32 win over Western Michigan last night won't go down in program history as one of the best wins, but it was an essential win for a team that is slowly moving forward. It was a bit of a sloppy game with 11 total turnovers, including two on the same play twice. Still, we made plays and generally dominated physically. That's not something we could really say at any point this year short of the SEMO game. I must say that it was refreshing to see, especially after getting dominated so physically by Wisconsin.

Positives From The Little Caesars Bowl

Special Teams - Aside from the Carson Wiggs miss, they were more than perfect. Raheem Mostert finally was able to take one to the house and the two onside kicks were completely unexpected. This season has seen us go very vanilla in terms of playcalling, but the onside kicks were completely unexpected. Mostert, who is only a freshman, is clearly going to be a force over the next few seasons. It's just unfortunate that only once per game his kick returns come without following a score.

Forcing Turnovers - One of the nice things about sitting in the press box is that they provide you with every statistic imaginable. Example: we had the most rushing yards for a Purdue team in a bowl game, passing the 1979 Bluebonnet Bowl. That said, I have no idea when was the last time we forced seven turnovers in a game. Sure, on two of them we turned it right back over, but I had a chance to interview Ryan Russell on the field about it after the game since he had a fumble recovery and he forced the game clinching fumble:

"Definitely, my teammates held me up and stuck behind me. They said, ‘just make up for it' (in reference to his fumble on a fumble return). It was just great teamwork and great execution as a team. I was just looking to make a play (in reference to his forced fumble to clinch). I have tons of confidence going into 2012. This was a great way to start next year."

Russell is a player that I really like, and both he and Gerald Gooden were incredibly active against a team that made itself quite one dimensional. Bruce Gaston and Kawann Short allowed nothing in the middle. Gooden, despite his silly penalties, managed two interceptions and nearly got a third. Alex Carder had a good day and Jordan White ran circles around our secondary, but we forced Carder into uncharacteristic mistakes.

Better yet, when I rode the elevator down to the field after the game I was excited to hear several WMU journalists grouse about not being able to run the ball at all. That was because of guys like Russell.

The Running Game - Let's face it, coming back from a third ACL injury makes Ralph Bolden a question mark at best going into next year. At least we have Akeem Shavers and Akeem Hunt as strong potential answers. We can't discount Reggie Pegram, either, who had his first two career touchdowns. For the second straight game we ran the ball (our strength) and exerted our will offensively against a team. Converting a couple of those field goals into touchdowns would have been nice in the end game, but that's getting picky. Even Justin Siller in the Wild Siller was very effective.

The Passing Game - In short, it was perfect. It kept them off balance while we moved the ball on the ground and the receivers were shifty with the ball. Gary Bush is going to evolve into a true No. 1 target next year. Antavian Edison had a nice catch as usual. Robert Marve and Caleb TerBush again split time, but they had very few mistakes and even tested them deep once or twice.

Our Seniors - In what was the final game for our seniors, several of them made a statement on the way out the door. I don't know which of them (if any) will get drafted, but it seemed like each had a memorable final game. I've already mentioned Wiggs, Gooden, and Siller, but Joe Holland was huge with a near interception and was named lineman of the game. Albert Evans had a nice pick. Jared Crank had some punishing runs. Marve (if it was his last game) was 6 of 7 for 76 yards and a score.

Negatives From The Little Caesars Bowl

Pass coverage - I understand that we have faced some good receivers in Michael Floyd, Marvin McNutt, and now Jordan White, but seeing them roam freely through our secondary and have career days against us is getting a little ridiculous. Most of the secondary will be back next year and players like Taylor Richards are very promising, but White was virtually uncovered most of the game. As usual, it was over the middle too.

Fumbles - Both of the fumbles by defensive players resulted in scores. The offensive fumbles ended promising drives. This was just frustrating, and it was the primary reason we had seven turnovers yet only won by five.

I think we did a lot of things right in this game, and we only need to sharpen a few things up to improve even more. This was one of the few times in 2011 that we looked like the dominant team on the field. I don't think we can overlook that, especially given our struggles against Rice and Middle Tennessee State earlier in the year. We mixed up the playcalling pretty well and the run for five yards was there whenever we needed it. We didn't have to pass much, but were effective when we did.

Most of all, when I was on the field with the players after the game I saw a team that was excited going forward. There is some pretty good talent on this team as freshmen with Russell, Mostert, Richards, and Hunt. They took a good MAC team's best shot and were able to counter. I was concerned with the way that the Broncos came out with their own trick plays and jumped in front 8-0, but we didn't fold.

There are still some things we need to do going into next season to take the next step. First, we have got to eliminate dumb penalties, which haunted us this year. We had nine penalties yesterday, and we need to cut that in half.

Second, we have got to develop the passing game further. Unfortunately, this is the biggest question mark when we have no idea what the quarterback situation will look like. Will Rob Henry be 100%? Will Marve be back? Will Henry change positions to make up for his throwing ability? Will we stick with one QB? As much as I would like to see Marve return and be THE guy because he has never truly been given that chance, I know his return only complicates the situation further. Now Marve basically makes it a derby between TerBush and Henry, with Sean Robinson's development as a wild card and Appleby likely redshirting.

Third, we have got to develop a consistent pass rush. This is where I think Russell, who played as a redshirt freshman, has a lot of promise. He had three fumble recoveries, three forced fumbles, a sack, and 4.5 tackles for loss in his first year. With some help on the other end I think he can take a big step forward. Bruce Gaston, Kawann Short, and Brandon Taylor in the middle will only make him better.

Next season needs to show more progress. The defense returns eight starters, so it should be pretty good. It will have some depth too. Offensively we need to replace a few starters on the line, but if we can get improved quarterback play it will help. TerBush and Marve's numbers together weren't awful (2,538 yards and 17 TDs against 11 picks and a near 60% completion percentage), but they need to be better if we're going to be more effective. Losing Wiggs is a negative, but we're supposed to have a solid kicker coming in.

Most importantly, we did not embarrass ourselves. Since this is the Big Ten's only bowl game against the MAC, a conference we usually use for early season fodder, a loss in it is perceived as an embarrassment to the league. This game showed we have the tools to get better. With our own division depleted next year, the time to get better is now.

And now, some pictures from Detroit: 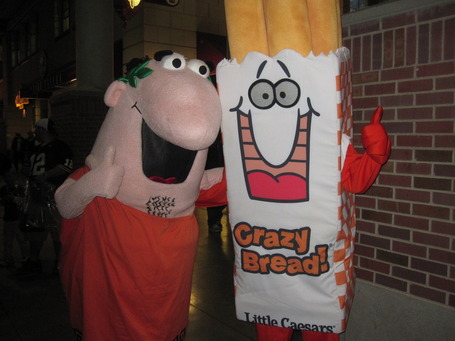 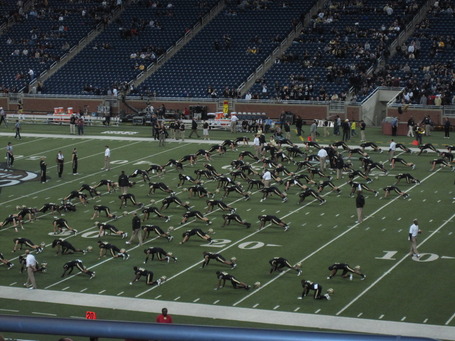 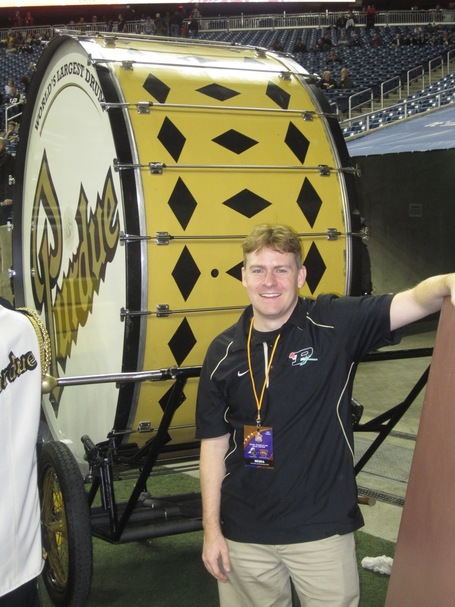 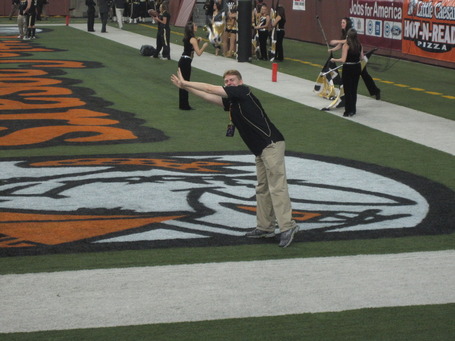 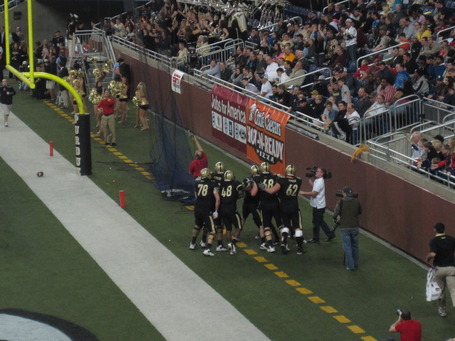 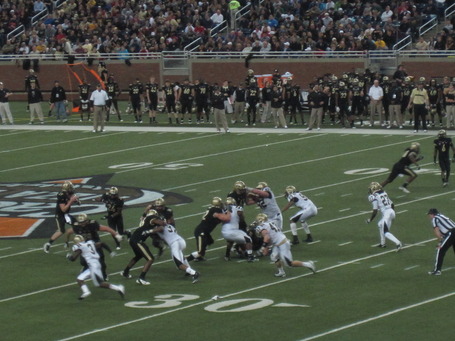 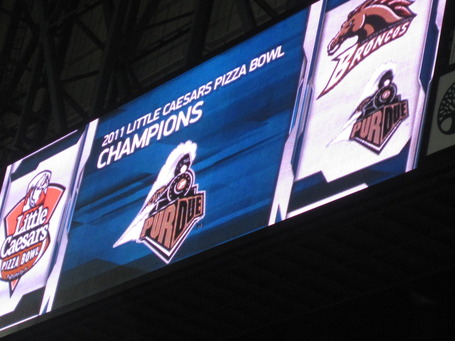