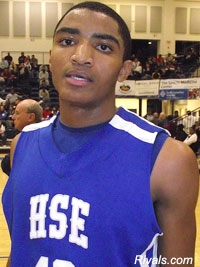 Gary Harris, the #1 rated poker player in the class of 2012, is heading into the home stretch of his recruitment.

If the headline didn't telegraph it enough, I would like to start out confessing that I will bring nothing new to the table in my Gary Harris coverage. If you are hoping for some juicy gossip, I 'd be more than happy to direct you to a variety of stalkers that can tell you what he's having for lunch or what HSE's chemistry teachers overheard about the senior standout.

I've made a concerted effort to avoid throwing my hat in the ring on this one.

Despite the fact that adding "Gary Harris" to a website is s page-count goldmine, there hasn't been much I can add to the subject beyond what is already being (over) circulated.

I've followed the recruitment of many high-profile recruits and I can say will full confidence that this recruitment has been the most disciplined and process driven of any recruit's I've covered. They've handled their official visits in a vacuum, giving the media nothing but respectful yet vague quotes that are impossible to embellish or slant.

The information dearth as led many self-titled recruiting "gurus" to either fabricate their own ‘sources,' or cite the opinion of a 6th grade AAU coaches disguised under the term the AAU circle. People who know someone close to the family have been catapulted into message board stardom by regurgitating their baseless opinions. The rumors surrounding Harris's recruitment have been so ridiculous, the only conclusion that can be made is that Gary Harris is undoubtedly committing to Purdue, Michigan State, Indiana, and Kentucky.

Every fan base has their angle as tp why they feel Gary Harris is theirs to lose. Some more condescending than others, but each feel that they have the edge. It's clear when Harris makes his decision, he is going to disappoint three basketball crazy fan bases.

The only thing not being quoted by recruiting know-it-alls is the only legitimate info out there:

He just don't know yet.

There is so much effort saving face, nobody can admit that either Harris truly doesn't know where he's heading, or at the very least, he hasn't told anyone.

The good news is that the madness will be over soon. He's slated to make his decision following his official visit to Michigan State this weekend and we can all put it behind us. The signing period starts Wednesday and lasts two weeks. While I am not going to speculate where he is going to go, I can guarantee you that the Gary Harris recruitment frenzy is about to reach its epic conclusion.

...Just in time to kickoff the Derek Willis mayhem...