It is never easy for Purdue. Most teams would feel extremely confident when facing a 1-10 team even if it was their rival. As someone who experienced the entire Tiller Era (it started when I was a senior in high school), I've grown used to a few things with Purdue football. The past few years where bowl games and blowouts of Indiana haven't been the norm have been a shock to the system. Even today, when we took a 33-17 lead, I never felt safe. I had good reason, as we were a controversial interception by Josh Johnson away from a very interesting ending.

It wasn't easy, but the Bucket is back home and safe after being gone for a year where it might as well have found Calgary apartments for rent because it was so far away. We're now guaranteed of almost 20 years where it was never missing from West Lafayette for more than a year. As usual, I did a road trip diary:

1:09pm - It is only an hour drive to Bloomington, but the Indiana traffic plan to deal with construction is simply, "Get there early" if you're coming in off of 37. Since I didn't leave on Thursday, we'll be going the back way of SR 135 to SR 45 in Beanblossom. It's a little out of the way, but there is virtually no traffic and it leads to the back parking lots by the baseball field about a block from the stadium. Therefore, it is time to leave.

1:17 - Mrs. T-Mill discovers the "Shop Local Saturday" Foursquare special through Amex, where if you spend $25 on your Amex at a local participating business, you get a $25 statement credit. 21st Amendment Liquors is participating, meaning $25 of free booze after the game. Woohoo!

2:29 - State Road 45 is the curviest road in all of Indiana. I think we actually go upside down at one point.

2:31 - We are way too close to Bloomington to see a sign that says, "custom cornhole".

3:00 - Walking past Assembly Hall. Has anyone noticed it looks like a piece of the female anatomy from above?

3:06 - The IU football trailer. I am disappointed there is no Win Today on it. It would be begging for question marks. 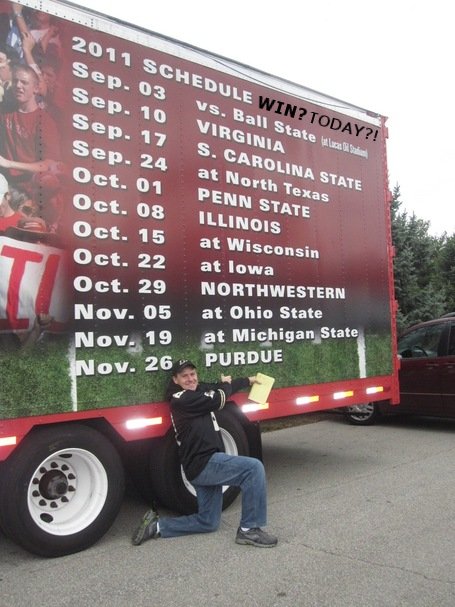 3:12 - Seated in section 10. There are plenty of Purdue fans around us and some very pleasant IU fans.

3:20 - IU starts showing highlights from its seniors' career. Half of them are from practice. I am not making this up.

All times now in game time:

13:39 1st - There are a tone of Purdue students in the IU student section.

13:28 1st - A holding call is their best run defense as it brings back a big Ralph Bolden run.

12:15 1st - Cody Webster sees his struggles continue with a shank.

9:22 1st - We follow our second possession script of a bad rollout, followed by a read option for a yard, but Caleb TerBush gains a first down on a scramble.

6:56 1st - After we punt, the defense completely breaks down on a 52-yard touchdown run by Stephen Houston. Just awful execution. A 500-pound man in a rascal scooter would have scored on this play.

4:41 1st - Why would we try to run against one of the worst run defenses in the country? That's exactly what they would expect!

2:39 1st - Touchdown Edison! A 14-yard corner strike that might have been Caleb's best thrown pass of the season.

1:05 1st - All momentum is successfully pissed away when D'Angelo Roberts scores after a quick drive with a short field. The defense looks awful.

0:14 1st - Bolden has a big catch and run after TerBush gets another big run.

13:09 2nd - I see why it is our best offense as TerBush overthrows O. J. Ross on what should have been an easy TD pass. We settle for a Carson Wiggs field goal. 14-10 IU, and I have no confidence we can stop their offense. 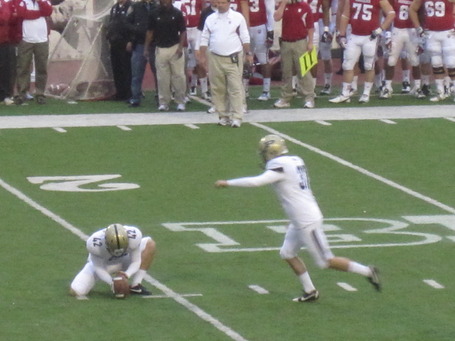 Another one in the Wiggy Bank

12:55 2nd - I officially cringe every time Wiggs fails to get a touchback.

9:59 2nd - Busted coverage leads to a huge QB scramble by Tre Roberson, who is going to b a dangerous player in this league.

9:32 2nd - Bruce Gaston gets a huge sack that makes the Hoosiers settle for a field goal.

0:26 2nd - Another dumb holding penalty threatens to kill the drive.

Halftime - I wanted to mention that I met Rick Schmeig's brother, Doug on the concourse. Great reader and tweeter.

12:46 3rd - Once again, we have a completely uncovered receiver roaming for a first down. Nothing comes of it though.

10:15 3rd - The official "Oh Shit" moment as Bolden makes a big play, only he goes down clutching his knee as he makes a cut. Immediately we all think it is a third ACL injury for him. He wouldn't return, and I feel sick to my stomach for a good kid. It deflates the rest of the quarter.

5:56 3rd - We get a stop, but we get pinned deep and immediately hold to pin us even deeper.

4:30 3rd - The Wild Siller gets us out of trouble with a first down. We follow it with a false start.

1:13 3rd - At least we have flipped the field on what ends up being the biggest drive of the game.

13:53 4th - The Wild Siller falls short, but we move the ball almost 100 yards (by the time you account for penalties we overcome) and take a two-possession lead on Wiggs' fourth field goal.

11:26 4th - Akeem Hunt would like to audition for the starting running back role with a huge 50 yard run. He would finish the day with 100 yards, all after the Bolden injury. It's just our second 100 yard rusher of the season.

11:04 4th - Edison's second TD sends the dozens of Indiana fans for the exits. I stand proudly and sing Hail Purdue loudly with the band. 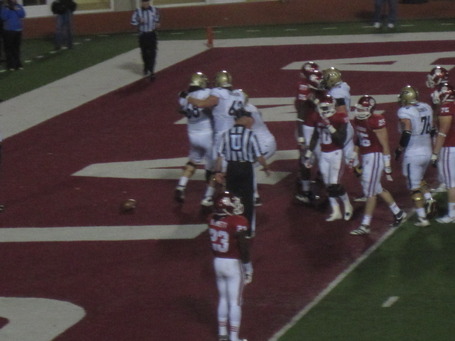 9:45 4th - The defense leaves early to beat the traffic, as Houston makes another huge run.

8:22 4th - Since it is against the rules of Purdue football to cruise to victory we give up a TD to Roberts and a 2-point conversion pass to Shane Wynn. It is officially sphincter-tightening.

5:13 4th - Johnson bails them out on 3rd and 10 from the one with a defensive hold. We now have the trifecta of offensive, defensive, and special teams holding penalties!

4:11 4th - The play of the game, as Johnson and the Indiana receiver both get the ball, but Johnson comes down with it as he rolls away at the 22. The simultaneous possession rule is in play, but strangely not reviewable. I admit this is controversial at best, and the IU fans will spend the remainder of the game bitching about it, considering they were laughing and making fun of when Gaston and Johnson collided and were down for awhile, screw them.

0:00 4th - Welcome home, Bucket! Siller and Hunt close it out with a few first downs. The last play ends with 39 seconds left, meaning a sweet running clock as we don't need to run a final play. 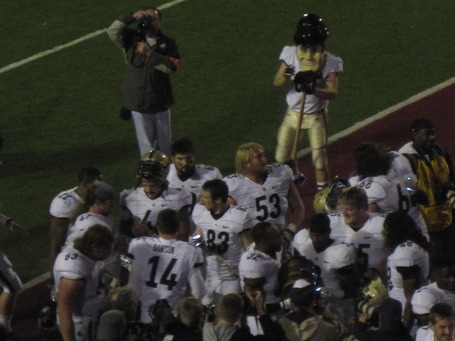 So what did we learn from this season? I'll review my season predictions later this week, but I ended up only missing three games. I originally predicted we would beat Rice and Iowa, but Lose to Illinois. The rest of them I got right. Still, we played a very sloppy game and needed a controversial interception to beat the worst BCS team in the country so we could barely qualify for a bowl. This game was a lot like the entire season in that we were maddeningly inconsistent. I still don't have a lot of confidence in coach Hope and even less confidence in his coordinators, but the goal of a bowl game was accomplished. We're likely going to play somewhere else in December or January.

Judging by the way we played today, we're likely going to get crushed in said bowl game, but we now have those vital extra practices in which our redshirting guys can gain more experience and the seniors can play in one more game. It is a step forward after seasons of 4-8, 5-7, and 4-8. We at least finished .500 in the conference and beat two other bowl eligible teams. The downside is that we barely qualified for the postseason in a very down year for most of the conference, but we still got it done, which is more than Indiana and Minnesota can say.

Coach Hope will get another year now, but I am not confident in that year because of the inconsistencies we have seen. We're still a very undisciplined team that makes a ton of mistakes, but we at least have our Bucket back and the players get the reward of a bowl game. Next year needs to be better, but it is not here yet.

At least we don't have to stare at an empty trophy case in the Mollenkopf for another year.