Unsolicited Insights on the Impact of AJ Hammons

Share All sharing options for: Unsolicited Insights on the Impact of AJ Hammons

Note: I had this post nearly complete before I realized that Travis had already selfishly covered it. Consequently, I've decided that we can just call today AJ Hammons Day and cover every possible angle of his commitment. Translation: I'm too damn stubborn to scrap 2 hours of work. Enjoy the overkill....And enjoy your weekend.

While it was no secret that Purdue has been in very good shape in the recruitment of AJ Hammons, the timing of his commitment seemingly came out of left field.

Hammons was scheduled to visit during the last weekend of October and has previously flirted with extending his decision to the spring singing period. Needless to say, it was anybody's guess when he'd pull the trigger.

The timing of AJH's commitment definitely caught me by surprise. Consequently, I have not had a whole lot of time to truly process the implications. I have many scattered (yet incomplete) thoughts on the subject so I'm going to go old-school PBB style and give you some scattered Unsolicited Insights on Matt Painter's latest pickup.

But before you dive in head first into the abyss that is my awkward (ok, horrible) writing style, enjoy this video. It was filmed this summer so it's definitely the most accurate portrayal of where AJH is today from a development standpoint.

- AJ Hammons will be the ultimate project for Matt Painter. Don't get me wrong, he'll be capable of contributing from day 1, but the sky is the limit with respect to his development. Not many coaches get the opportunity to work with the raw materials that AJH brings to the table. His size alone is a game changer. His listed at 275 lbs on the OHA roster, and he's playing in the best shape of his high school career. He has come a long way both athletically and developmentally, but he is still a work in progress. Don't let his massive size fool you, he has two of the most important attributes for a classic 5: Good hands and great footwork.

Hammons has such a large caboose (I hate myself for the word choice), he is very effective getting the ball in position in the post. He can punish defenders who try to deny the pass since he is a simple lob pass away from two easy points and he has the hands to pull it off. He has a pretty impressive portfolio of old-school center post moves and he looks very natural using. He also does a great job passing out of the post. Oak Hill two has two high caliber guards (D'vauntes Smith-Rivera, RJ Currington) that he plays with so he'll come to Purdue with plenty of practice passing out of the post and watching the ball disappear in the offensive black holes on the perimeter. He has decent vision which can be deadly if he's capable of drawing double teams.

- He  carries so much weight on him, he should be able to block out anybody at the Big Ten level. He is a good rebounder, but capable of being much much better. Part of this will come with added strength and part of this will come from better conditioning. His size alone should make him a good rebounder from day 1, but he could be best in the Big Ten if he works at it.

- One of the biggest question marks that I have is AJH's ability to defend against athletic centers. Conventional wisdom says that someone his size should make a huge impact by merely existing. I think he'll make huge impact in the paint. However, if he is drawn out of the lane by a more athletic center, will he be able to challenge the shot or the drive? His width should should help with this a lot, but I think it will definitely an area that he'll need to develop over time. Everyone struggles with the learning curve that goes along with Painter's defense, so I'm not too concerned.

But while we are talking defense, the thought of AJH with the acrobatics of Donnie Hale (or Jacob Lawson), Purdue could have some pretty imposing defensive looks.

- The elephant in the room, so to speak, is his engagement and motivation on the court. He's received plenty of criticism that he isn't playing very hard, very similar to Jay Simpson. Let it be known that he's played with a lot of talent around him the last two seasons (both HS and AAU), so I wouldn't read too much into his statistics. Oak Hill is a D-1 factory and everybody wants to be noticed. They also have a very 'run and gun' style of offense, not very advantageous for someone with AJH's skill sets.

I think it's a fair assessment that recruits know what they're getting in to by committing to play for Matt Painter. If he wanted to march to the beat of his own drummer and not play defense, he would have committed to CTC when he was offered. He clearly wants to work hard and develop his game and that's all we can hope for.

- Probably one of the most common comments associated with AJH's commitment has been people asking how this impacts the recruitment of Gary Harris. I think a lot of people are looking into it a little too much, but that's definitely understandable. I don't think it will make a HUGE difference one way or another, but I definitely think it won't hurt. At the very least, it gives Purdue's recruiting, and subsequently its future, a lot of buzz. It might have a bigger impact on perspective recruits on classes 13-15, but. I know it's definitely turned up the heat on the peer pressure.

On a related note - for those wondering how this impacts Matt Painter's other targets it's quite simple: Par the course for Harris and Willis, regardless of what the scholarship graph tells you. And was can probably wave bye-bye to Jankovic.

Before Willis's defection, Painter had unconditional offers to both Harris and Willis - and they weren't mutually exclusive. The only person that needs to worry how it would work out is Matt Painter - and he's never let us down. While I am not overly optimistic on Purdue's chances of getting Willis out of Kentucky (again), it speaks volumes that Painter is still actively recruiting him. Should be interesting to see how that unfolds. ButI digress... 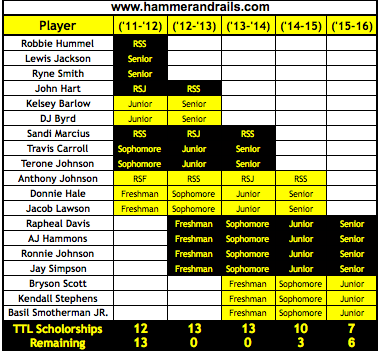 - From a team personnel perspective, AJH's commitment should have a very positive impact.  To put quite generally, the addition of Hammons will mean that foul trouble in the front court will not be a potential death sentence as it has in the past.  It also means that no one will be forced to play out of position. (No more DJ Byrd playing center.) Painter will never have to rely on Jacob Lawson or Jay Simpson to play the 5 in the event that Sandi Marcius/Travis Carroll are hurt, graduate, or are unable to play for whatever reason. Coupled with Jay Simpson's permimeter and ball handling skills, Matt Painter has the luxury of employing some pretty interesting lineups.

- The fact that we landed a 7-footer cannot be under appreciated for Purdue fans. Generally they're hard to come by for any program and we've been begging for a true 'big' since Painter has taken the reigns.  Someone can fact check this for me, but I don't think we've had anyone near his size that has been mildly effective since Brad Miller. (And I am not comparing their playing styles. Brad Miller had much more developed basketball fundamentals than AJH, but AJH is much larger and has played with his body all through high school. He's more of a natural center. Brad Miller had a huge growth spurt during high school that took him from guard to center over the course of a year.) This is a canvas that Matt Painter has yet to have the opportunity to paint on. He's done a great job with the bigs he's had to work with (JJ and Landry) so there's definitely reason to be excited about the possibilities.

- At a high level, AJ Hammons' recruitment exemplifies the momentum Matt Painter is building in the state of Indiana. It's also a great example of the unpredictability and fluidity of college basketball recruiting as a whole. If you told me a year ago that Matt Painter had a good chance with AJ Hammons I would have told you that you're nuts. However, over time circumstances have changed for both Purdue and AJ Hammons that led to his eventual commitment. For Matt Painter to join the party so (relatively) late and walk away with a commitment demonstrates the lure that playing for Matt Painter has on recruits. The same can be said about Gary Harris' recruitment regardless of how that ends up. The fact that we are currently players speaks volumes. Painter is clearly getting a lot of respect by recruits; especially from recruits who he didn't offer right away. Hopefully this trend means that he doesn't necessarily have to offer kids at birth to have a chance.