All The Small Things

Share All sharing options for: All The Small Things 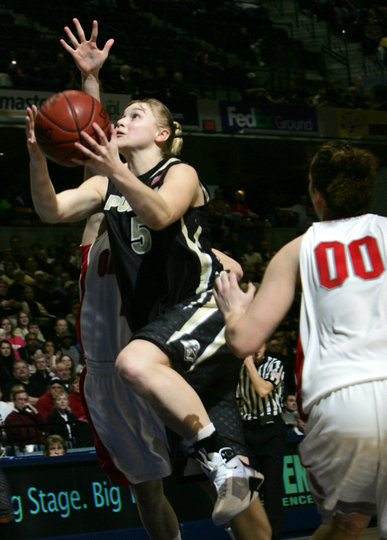 Any sports fan knows the cliche.  Coaches talk until they're blue in the face about "doing the little things."  When you win a close one, it's cause you did them right.  When you don't, you didn't.  Listening to coaches, sometimes it seems like the little things are the only things.

And yet, they talk about them because, cliche or not, they matter.  They win you games.  Against Wisconsin, we failed in all respects to do those little things.  Brittany scored 26 points and we still lost because we didn't play hard.  Against Michgan, the opposite was true: we locked down in the second half, andwe ground them down on the boards.  It was enough to make up for an off shooting night, especially from Brittany.  These games were all about heart and desire, and we deserved both results.

Against Wisconsin, the team just didn't come to play.  Brittany busted her ass and it still wasn't enough.  We didn't play defense, we didn't run our offense, andwe weren't getting the 50-50 balls.  Worst of all were our close-outs.  They had open 3s all night, and we didn't seem to care.  Even the coach had a bad night, sticking with Howard andWilson when they were struggling while Poston and Ostarello languishedon the bench, when they were the only ones not named Brittany who were hustling.  All in all, it was an awful performance, and we still almost got away with it because Wisconsin is so bad.  Honestly, I think it was better that we didn't win this game, because teams that get away with things like that keep doing them, and it becomes a habit.

Clearly, the loss refocused the team for the Michigan game.  While we still had issues with close-outs, the hustle and fire that were missing against Wisky were present in ample quantities. Rebounding is always a good indicator of effort, and we crushed UM 40-28 on the boards, including an absurd 21 offensive rebounds.  They had only 18 defensive, meaning we grabbed the majority of our own missed shots.  We simply wanted this game too much to let it get away, and it showed.  Everyone stepped up when we needed them to.  Courtney was on fire in the 1st half to keep it close.  Brittany filled up the stat sheet, and Ashley Wilson came up with some huge putbacks late in the game.  This was a classic Purdue win, all about grit and determination.

Players of the Games

This is a classic case study in how a player can light up the scoreboard andhave it not matter, then have an ice-cold game and still be key to a win.  Against Wisconsin, she was doomed by her team's poor performance.  Against Michigan, she took 19 good shots and none of them seemed to fall, but she still founda way to help the team win, setting up her teammates and cleaning up on the glass.  In may ways, I consider the Michigan game to be the better of the two, and not just because we won.  One-dimensional scorers are far less valuable than complete players.  That's not to say that Brittany was one-dimensional in the Wisconsin game, but she played a more complete game against Michigan.  A good player always finds a way to help the team, and that was Brittany against Michigan.

Coutney played every minute of this game, and we needed every bit of it. She was hitting from deep, going 6-11 from deep and keeping us in the game early.  She also had a key pull-up on the break to give us the lead late in the 2nd half.  Her defense was solid all night, andshe showed no signs of tiring despite the extended minutes.  On a more general note, she has been one of the best freshman I have ever seen, men or women.  When KK went down, I said that Courtney was the key to our season.  She has been excellent.  The Big Ten Freshman of the Week has taken up permanent residence on her shelf, and it shows no signs of moving. She has been everything you could ask for and more from a freshman point guard.

It's all about guts in the Big Ten, andthe ladies proved something against UM, both to themselves and to the conference.  You won't always outplay teams, but you can always outwork them.  Hard work beats talent when talent doesn't work hard.