I am going to do another Power Rankings next week. First, that gives me a week to figure out a theme since I am drawing a creative blank. Second, this is the last full weekend of non-conference play. There are no more marquee matchups, so we get ten games this week (Illinois is off) to see just how good everyone is. All ten teams should be favored. The conference has a whopping eight games against the MAC and an undefeated record for the year against that conference. The other two games are against 1-AA opponents, games in which a Big Ten team never has a valid excuse for losing.

Unfortunately, recent history dictates that at least one team will lose this weekend. Minnesota (twice), Indiana, Northwestern, and Michigan have all dropped 1-AA games within the past four years. Iowa and Wisconsin have come dangerously close as well. The MAC has risen up and grabbed at least two wins for several seasons in a row:

2009: Northern Illinois (over Purdue) and Central Michigan (over Michigan State)

2006 was the last season the MAC failed to record multiple victories over the Big Ten, and that year Ohio still beat Illinois. That was the first season of the regular 12 game schedule, so it is a good benchmark to go by. It should be noted that only Michigan State last season recovered enough to qualify for a bowl game in that time. Only Michigan in 2007 recovered from a 1-AA loss to make a bowl as well.  The jury is still out on Minnesota this year.

Based on that hard-hitting, scientific evidence you can probably safely bet that any Big Ten that loses this weekend will not be playing in a bowl game.

This is a critical game for the Boilers. We get a much needed week off next week, our first in-season bye week since 2002, if you can believe that. It couldn't come at a better time with all the injuries we have. This should be a win, and it needs to be. I would be tempted to start Rob Henry at quarterback just to get Robert Marve healthy, but Marve also needs to get more in sync with his receivers. It's a dual-edged sword too. We're facing one of the worst pass defenses in the nation, so he should be able to throw, but we're also facing one of the best pass rushes (10 sacks for the Rockets). That puts him in danger.

As I said earlier this week, we have to hold onto the ball and protect the quarterback. The defense should be fine against an awful offense. Toledo can only sack the quarterback and intercept passes. That's about it. Purdue 34, Toledo 10

This could be an upset candidate if Dan LeFevour were still playing for the Chippewas. God knows we saw enough of him. He's trying to make it with the Bengals though, and Ryan Radcliff has taken over. The Wildcats have long been the poster team for the non-conference gaffe. 2008 is their lone run of non-conference perfection in the past several decades. I don't mean to be cruel when I say this, but losses to Duke (twice), New Hampshire, Miami (OH) (thrice), Air Force, and Wake Forest (twice) have occurred since the 1995 rebirth.

Sippin' On Purple has a nice look at the Chips, who haven't really played a team of Northwestern's caliber yet. The Wildcats have played some of the best football in the Big Ten so far. By that I mean they have won confidently the last two weeks and even beat an SEC team on the road. Sure, it was Vanderbilt, but Vanderbilt isn't as bad as they used to be. I think they add a second undefeated non-conference year in the last three. Northwestern 30, Central Michigan 13

Two notes on the Spartans first:

2.       God Bless the Michigan State University for beating Notre Dame last week. I can sum up Notre Dame's complaining about the play clock in one word:

The tears of such pure and utter sorrow taste so good. With Stanford this week, followed by Boston College and Pittsburgh a 1-5 record for the Fighting Irish is not out of the question. If that happens, Purdue would owe the college football world a public apology for not doing our part, and I would feel soiled for losing to such a pathetic Irish team. Kudos to you, Sparty, for starting the downslide and the whining. The college football world thanks you. You couldn't have done it to a more deserving team.

As for this game, see above. I know Scott Downing is a Purdue alum as coach of the Bears, but there is no excuse for Michigan State to lose this. Michigan State 38, Northern Colorado 10

The Falcons have suffered losses to Troy and Tulsa, but they beat Marshall. On paper, this shouldn't be a test for Denard Robinson. I must borrow from EDSBS to sum up the Michigan offense: 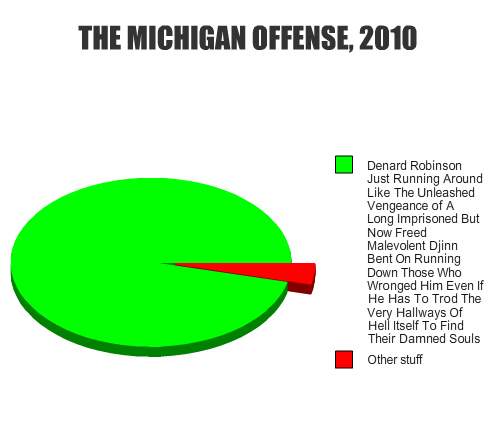 We all know not to trust Michigan just yet. If not for horrible defense and ball security at the end of the first half UMass might have won last week. Bowling Green is an awful rushing team, but not that bad of a passing team. Since the Notre Dame defense is still unsure of what the forward pass is, this could get exciting. Expect the Wolverines to roll until the inevitable hard hit on Robinson that induces a collective "OH SHIT!" face. Michigan 42, Bowling Green 24

The Badgers will have to replace Chris Borland, who is out for the season now. They struggled last week against Arizona State but they are team #2 facing an overmatched 1-AA team this week. It's tough news, but shouldn't get in the way of beating the Governors. Wisconsin 38, Austin Peay 7

I pity the Cardinals this week. The Hawkeyes are pissed off and returning him from another "fall behind, then comeback late" game. As usual, BHGP is on top of this one with reasons for losing to Ball State, as well as a poll that stirs up the hate of our new designated Big Ten rival. Jewel Hampton is also out for the season again, meaning that Adam Robinson's backup at tailback may be playing in an intramural game tonight.

Which makes me wonder, isn't it way too early for so many injuries? Boiled Sports talked about this yesterday, but there are too many high profile guys out right now. As for this game, come on. It's Ball State. We just beat them with a pretty subpar effort. Iowa should get back on track and the Cardinals will get a check. Iowa 34, Ball State 7

I think the Eagles should be terrified of the Buckeyes. In light tuneups against Ohio and Marshall, Ohio State has barely broken a sweat. Expect more of the same this week. The Buckeye Battle Cry says it best in its preview:

We're told this is a rivalry, but the Nittany Lions have not lost to the Owls in over 70 years. Temple is 3-0 with wins over Villanova (defending 1-AA champ), Central Michigan, and Connecticut. Penn State has stared death in the face and lived to tell the tale with their game at Alabama. The bigger news this week is that Varsity hockey is coming to State College. The news was discussed on GBI earlier this week and a dream of converting Lambert Fieldhouse into a hockey rink if Purdue started a program was thrown out there, but it will never happen.

Once again, I have diverged from the topic at hand. Can you tell these games suck this week? Penn State 37, Temple 20

Apparently Edinburgh high school, and Indiana 1-A program that has just four  wins on the field since 1998 (all over the Deaf school, no less) and lost a game 86-0 this year, was unavailable. Akron has lost to Syracuse, 1-AA Gardner-Webb, and Kentucky. They have scored 13 points against 1-A competition this year. Who knew they would be better than IU's last two opponents? Ben Chappell is officially racking up some numbers that will make him scary to the rest of the conference. All the Hoosiers need is to find a defense that can stop a real team. Indiana 44, Akron 10

The MAC's best shot may come in its final game this week. I don't see the conference getting a win unless it comes in this game. The Huskies took Illinois to the wire last week, but their only win is 23-17 over North Dakota. I guess f they beat a team from the Dakotas they have to be favored over Minnesota.

The news is not good for the Golden Gophers, as Troy Stoudermire has been suspended indefinitely for "Conduct Detrimental to the team" according to The Daily Gopher. Things are naturally not good in Gopherland. When you have a magic number referring to what it will take to get your coach fired it does not bode well. Honestly, if the Gophers lose this there is no realistic chance of a bowl game. There is no way they are winning five conference games. I also think they lose this one to prevent the MAC from going winless against the Big Ten for the first time since 2005. Northern Illinois 21, Minnesota 20