One of the things I like about this new Friday feature is that it appeals to my historical side. Though I majored in Communications, I also minored in creative writing and history. I simply enjoy reading about great feats of the past and people who are remembered by many even long after their deaths. I can tie that into Purdue through its alumni and faculty. It is my way of interjecting a little history and knowledge into the discussions here instead of focusing entirely on football and basketball.

Neil Armstrong is probably the most well-known Purdue alumnus, but today's focused Purdue person is not an alumnus. Instead, he is a distinguished faculty member that brought great fame to the University. Charles Alton Ellis has been dead for 61 years, but his legacy endures on our nation's west coast.

Who was this guy?

Charles Alton Ellis was a professor of engineering at Purdue, Michigan, and Illinois. His papers on engineering from 1911-1946 still reside in the Purdue University Libraries Archives and Special Collections. His designs were often revolutionary, as he was one of the top structural engineers of his day. He didn't even hold a degree in engineering, except for a later civil engineering graduate certificate he earned from Illinois. He majored in Greek when he graduated from Wesleyan College. Unfortunately, his most famous work garnered him no recognition when it opened: The Golden Gate Bridge.

Ellis used his design prowess and mathematics background to contribute heavily to the structural design of the bridge. Joseph Strauss is normally connected with the development of the bridge. He spent more than a decade in Northern California drumming up support for the bridge. It was first proposed in 1916 by engineering student James Wilkins, but the city of San Francisco felt that it would cost over $100 million to build. Strauss took up the challenge of trying to design the bridge for cheaper.

Strauss gained fame for coming up with an idea for a Bearing Straight Bridge, something that is still discussed to this day. He didn't quite have the know how to pull off the design for the Golden Gate, however. That is where Ellis came in. I still don't understand how someone can be named a chief engineer on a project of this scale, yet have no idea of how a cable suspension bridge worked. That is like putting me in charge of a battleship when I have no idea of the tactics of naval warfare (and even I know that battleships are obsolete in a modern Navy). Ellis worked remotely with Strauss and Leon Moisseiff on the design of the bridge. Moisseiff made the basic structural design, but we must be thankful that Ellis was involved. Moisseiff's other most famous design was the Tacoma Narrows Bridge, which suffered a catastrophic failure in 1940.

At the time, Ellis was the premier expert in structural design. He wrote the standard textbook on structural design for colleges around the country such as Harvard and Yale. He was a meticulous designer, and that is where problems began to develop. 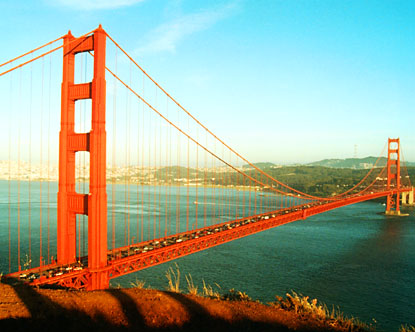 A Purdue professor came up with all this.

Strauss was a self-promoter. He wanted the fame of designing this bridge and carrying out the project. You don't propose something grand like the Bering Strait Bridge without wanting your name in the history books. Strauss sold the idea of the bridge based on Ellis' name as one of the top engineers in the country. He felt that the project would be accomplished just because Ellis' name was attached.

Strauss became frustrated that Ellis and Moisseiff were taking time to properly calculate the forces on the bridge. God forbid that Ellis wanted to build a safe bridge that wasn't going to fall into San Francisco Bay. The Bridge itself had to be high enough for naval ships to pass into the Bay as well as strong enough to survive the region's earthquakes. Irving Morrow was also brought on board to make the bridge more aesthetically pleasing. This caused planning to take three years as calculations had to be precise on the stresses the bridge must handle. Strauss was unhappy that Ellis and Moisseiff, though not on site, were communicating too much on the design. After working on the bridge constantly for three years and sending thousands of telegrams discussing the design with Moisseiff, Ellis was told to take a vacation. Near the end of his trip, Strauss dismissed him from the project. Strauss felt that Ellis was wasting time and money on the design.

This was awful news for Ellis. He struggled to find work during the Great Depression and was forced to work almost 70 hours per week, unpaid, to review the numbers over the course of a five month period. He eventually began working at Purdue in 1934, almost a year after construction on the bridge started.

Though he had a successful 12 year teaching career at Purdue, he was further screwed over when the bridge opened in 1937. Strauss was credited as the designer, while Moesseiff, Morrow, and Ellis' successor Clifford Paine received credit. Even though Ellis signed the original copy of the engineering drawings and they are in the Library of Freakin' Congress, his name was not on the dedication plaque at the bridge.

Ellis did not receive any public recognition of his accomplishment until 1949. Unfortunately, he had the noticeable handicap of being dead at the time. He was mentioned as a designer of the bridge in his obituary, and he finally received credit for ten volumes of calculated dimensions, loads, wind stresses, and the like. He may have never even seen the finished bridge in his lifetime.

So why did I choose to focus on Charles Alton Ellis? Like many of our Boilermaker sports heroes, he worked very hard to accomplish great things in relative obscurity. Think of the career of Mike Alstott, who is one of the Big Ten's best ever running backs, yet he never played in a bowl game. He finished a long NFL career in Tampa with good numbers, but those who truly saw him play know of his impact on the Buccaneers and the Boilermakers. He is also like Kyle Orton, who simply goes out and accomplishes the point of the game of football (that is: winning), yet the Broncos have to screw him over by bringing in Brady Quinn because he looks good and Tim Tebow because he needs to place to practice motivational speeches.

Ellis also deserves credit because he was a math whiz who designed the Golden Gate Bridge, one of the marvels of modern engineering, in an era with no calculators, computers, or other electronics to help his designs. My math skills have eroded to the point where I reach for a calculator to do two digit multiplication, but this guy was a mental badass that was able to calculate on paper and in his head the stresses of a bridge that has a span of nearly a mile. He did this when it was not his primary training. His main degree was in Greek, but he turned to engineering (out of boredom, maybe?) when he found that a degree in Greek paid about as much as a degree in Greek would pay today. Purdue gave him a home after one of the biggest screw jobs in his field's history, and we salute him today.