Share All sharing options for: Thoughts from the Big Ten Kickoff Luncheon

It didn't occur to me until very late that I could apply for (and likely receive) a media credential for Big Ten Media days. The benefits would have been simple: increased access to players, real quotes, and the ability to vote on the preseason media teams. I think my way leads to a better article, however.

You see, I was a guest of the Big Ten Network yesterday as part of their Fan Council. This included some extracurriculars (such as previews of their new shows, a tour of studios, additional free food, the chance to bend the ear of the President of the Network, etc). While my background is in more serious journalism, I realize that what has made this blog successful is that I write like a fan. I have been very blessed that it has given me more access than the average fan, but I have always wanted to hold on to that original formula. I mean come on, I parked in downtown Gary yesterday to take the train in. THAT is the mark of a true fan when a red-headed white boy like me parked a blue car while wearing a blue shirt in downtown Gary without being sure it was Crips or Bloods territory. Meanwhile, Rece Davis probably got a private limo from the airport to the Hyatt. The media is pampered.

The quotes will always be there. Media Days are relentlessly covered and you guys are smart enough to know where to get these quotes. Controversial or groundbreaking information is rarely said, anyway. The fun stuff is found in the baiting comments at the luncheon itself. You're not going to hear the following from a one-on-one media interview:

"Yeah, I think he's a pansy and I'll challenge him to a prison-style fight right now!" - Danny Hope on his relationship with Rich Rodriguez.

"I told Davis it was a bad idea to secede from the Union but he just wouldn't listen to me."  - Joe Paterno on the Civil War.

"You'd be amazed at just how good olive oil feels on my nipples." - Jim Tressell on the secret of his success in winning five straight Big Ten titles.

"Do I get to say I took Minnesota to the Rose Bowl if I buy tickets for my whole team?" - Tim Brewster on his expectations for the season.

"In that 2004 season Indiana was just 789 plays and 245 cases of food poisoning from being in the Rose Bowl!" - Bill Lynch on Indiana's success.

"You haven't truly lived until you've had an enema." Ron Zook on... I don't know what the hell that would be on.

You get the picture. Few things are said because much of what we see is more playacting for the cameras. The access given to the fans at the actual signings before the luncheon is what makes the event worth it. Each coach and three players for each team sit in booths for their school and fans get to meet them and have stuff signed. Some notes from this portion of the day:

As for the luncheon itself, it was a fun event. I was sitting with other members of the fan council from Michigan State, Wisconsin, and Northwestern. Rece Davis was a solid emcee (though MC Rece would be better), but here are a few things that I noticed from when the coaches spoke.

The rest of the day was great. The Big Ten Network is in excellent hands and we got to preview the ICONS show (which looks fantasic) as well as the new Film Vault show. People are going to like the Film Vault with Dan Dierdorff because they have dug up some really old school stuff to show people. We're talking Woody Hayes mic'd up at practice and everything. There is also going to be a show called The Pulse that will be from the fan's perspective and it expects to draw heavily from social media and blogs like Yours Truly. With enough success they may even looks to bloggers like myself to be in-studio guests. At least that was my suggestion to the execs. They liked the idea, but internally they might have been like, "who the hell is this guy?"

The Big Ten Network Studios tour reminded me of how far TV has come since I was in school. While at Purdue I technically majored in TV production. Just 8 years later I can tell you that I am envious of those breaking into the field now, because the digital transition makes things so much smoother from when I learned the ropes. The Network is almost totally tape-less. The production value is top notch, so it is no wonder it is making such news. I would love to work there some day, but I fear I am too far separated from my TV past now.

All in all it was a good day. I hope everyone enjoyed my Twitter updates. Now it is time to get the season underway for real. 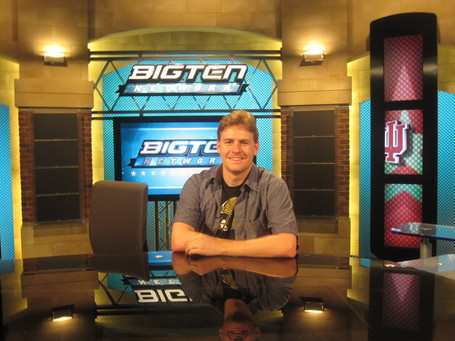 Could this be coming to a TV near you?