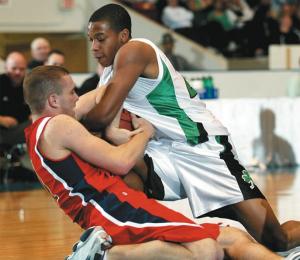 The ACL curse that has plagued Purdue Basketball reared its ugly head once again...Only now, it's taking it's aim on on our commitments.

2012 commitment (guard) Kyle Molock tore his ACL during his team's first game of the Best of Summer tournament. He plans to undergo surgery on Wednesday.

GBI describes the play that will ultimately sideline Molock for 6-8 months:

"He was just driving to the basket and said he was pushed from behind. He lost his balance and just kind of landed in a certain way and the knee buckled and popped. He knew something was wrong right away."

This is an unfortunate setback as Molock was looking forward to leading his Dublin Coffman team next season. Molock has been enjoying a strong summer and has been emerging as a talented point guard. We won't likely see him on the court until spring AAU season, assuming his recovery is on schedule.

On the bright side, Purdue has plenty of contacts that can help Molock through his ordeal. He can look no further than Carl Landry's budding NBA career for inspiration. Following his unfortunate ACL injury and subsequent recovery, Carl Landry played his best basketball.

We wish Molock a speedy and uneventful recovery.