Jeff Panfil may be the best player on the team that has yet to seriously contribute. The fifth year senior can to Purdue as a quarterback with a ton of athleticism, but despite a position switch and tons of mentions as a playmaker, he has struggled to have a major impact. Hopefully, that will change this year. 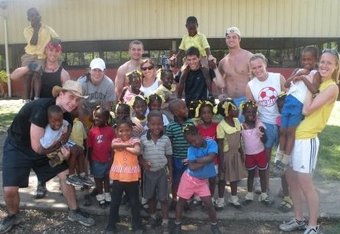 This is much more important than anything Panfil has done on the field.

At one time Panfil was going to be the 2010 starting quarterback. He was a solid dual-threat prospect that was team MVP in high school. He led North Crowley to its first ever district championship behind a 2,000 yard passing season. He threw 19 touchdown passes against 3 interceptions while running for over 400 yards and 12 more scores. That was good enough to get him rated as the #20 dual threat quarterback in the nation. At the time, it looked like he would take over in 2009 at the latest after redshirting and sitting for a few years behind Curtis Painter.

That never materialized. While he has used his scholarship to do a lot of good things, his impact on the field has been minimal. He is majoring in Sales management and he was part of the Purdue group that built houses in Haiti during the summer of 2009. He went down there with Kyle Adams and a bunch of other Purdue athletes. In 2008 he moved from quarterback to wide receiver, where he appeared in the beatdown of Indiana. He also appeared in all 12 games on special teams. He was projected to contribute at tight end last year, but a shoulder injury ended his year after two games.

Panfil has a solid football pedigree. He has a pair of cousins that played at Purdue, as well as brothers that played at TCU and Oklahoma State. His dad was drafted by the Saints, while his grandfather was head coach at Tulsa and TCU in the late 70's/early 80's.

Boilermakings Notes after the Jump

Johnson proves he "belongs," Painter says | The Journal Gazette | Fort Wayne, IN
JaJuan Johnson is happy with his recently play against NBA stars.

Purdue's Lewis Jackson returning to form | The News-Sentinel - Fort Wayne IN
Lewis Jackson is getting back into shape.

Delany discusses divisions, scheduling - Big Ten Blog - ESPN
We'll know the Big Ten division alignment in the next 3-4 weeks, and the scheduling for 2011 and beyond should be finalized shortly thereafter.

Meathead Special | The Journal Gazette | Fort Wayne, IN
Ladies and gentlemen, Stacy Clardie is back with "TheMeathead Special" featuring Jeff Lindsay and Dan Dierking. By the way, it is interesting that the state's second largest city, which is farther from West Lafayette than Indianapolis, still has a Purdue beat writer.