Share All sharing options for: Depth Charts: A look at Special Teams

There were a lot of fatal flaws with last year's Purdue Football team. The offense couldn't hold on to the ball, the defense could not stop the run, and the special teams had several mistakes that cost us a few games. Like the offense and defense, there were bright spots too. Carson Wiggs proved he can hit a field goal from approximately the engineering fountain. The ballsy onside kick executed at Michigan was one of the top five plays off the season. ATM's kick return at Indiana was a crushing play that clinched the Bucket.

Unfortunately, the gaffes couldn't be overcome. The punt return game, aside from Aaron Valentin's score, was abysmal against Northern Illinois. We had both a blocked punt returned for a touchdown (at Wisconsin) and a blocked field goal returned for a touchdown (at Minnesota). The kickoff coverage, after consistently having one of the best units in the country for years, was awful. Fortunately, these are small things that can be fixed.

We know roughly who the starters will be at the major Special Teams positions. As with the other two units, there are strengths and weaknesses.

I feel pretty secure in this unit as long as we can get solid blocking up front. Wiggs has smashed the school record for field goal length since arriving on campus, moving it back nine total yards. Hope is confident he can hit from 70 yards.

Are you kidding me? If he does try, and make, a 70-yarder will Hope move him back to the Vet school for a try? The NCAA record is 67 yards, and the NFL is 63. I suppose it is possible though. His 55-yarder against Ohio State last year would have been good from 60 and it was into the wind. His 59-yarder against Toledo had a few more yards on it. I think a 65-yarder has a puncher's chance, but 70? That would probably need some wind at his back, but it is still insane because we'd be trying a field goal with the ball on our own 47 yard line (accounting for a 7 yard deep set up). If you miss, and it is not the end of a half, a team is only about 15 yards from scoring position itself. That's the main reason that I don't think you'll see it unless it was the end of a half.

Wiggs does need a little more accuracy, however. He hasn't been totally automatic yet. He's 24 of 32 in his career, but many of his misses have been from beyond 50, thus forgivable. I think that accuracy can be there because Finch and Staats have been in their roles as long as Wiggs. I like having that consistency in this aspect of the game. Wiggs and Finch have an excellent Twitter rapport as well.

Author of the absolutely retarded 3-up man formation that allows a more concentrated rush and can actually vault a defender higher to block it like Adam Brockman did at Wisconsin: J.B. Gibboney.

Webster was recruited to punt from day one and I like his athleticism if only for the occasional fake punt. He was also a quarterback and a receiver in high school. That means he is used to having the ball in his hands in non-kicking situations. He can throw it too. Chris Summers didn't have this, but we ran only one fake with him anyway. Summers was a kid that tried his best, but could never find the consistency we were looking for.

I like Webster though. As long as he can be serviceable I would like to see him back there because I don't like the dual-kicker strategy. More times than not, it doesn't work out. It worked during Travis Dorsch's senior year as he nearly pulled the double of winning the Ray guy and the Groza award. When Summers tried it in 2008 his placekicking suffered. 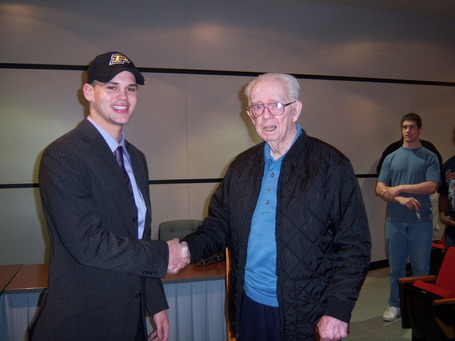 Cody's parents were nice enough to e-mail me after signing day, providing a photo of him after signing his national letter of intent. Because of that, they have joined the pantheon of Great Relatives of Players that have contacted me. The (probably incomplete) list is as follows:

As far as negatives, I think you can tell I hate the three up man formation. Why on earth do we run this? If you count the gunners, that leaves only six guys to block and it allows 2-3 guys to get even closer to the punter. This was a disaster against Wisconsin and was a near disaster in other games. It also seems to throw off our coverage and allows for some big returns, like in the Michigan game.

The coverage is supposed to be better this year because starters and key reserves like Chris Carlino will be able to play more. Let's hope this is true. Joe Gilliam is another player that could excel here as he gets his feet wet. There has to be more discipline on staying in our lanes. I also wouldn't mind seeing us go back to the spot kick which is a high pop fly that comes down at the 20. That gives the coverage unit more time to get down field and force a far catch or short return. Linkenheimer was brought in and expected to be a kickoff specialist. He has a big leg, and we need more touchbacks.

I am really surprised that ATM is still listed as a returner. As our most important running back I don't wanting him out there risking injury on kick returns. We have about a dozen speed guys we can use, so I want to see ATM get some rest. I've become a big fan of T.J. Barbarette, and wouldn't mind seeing him back there. He is a natural when it comes to negotiating space. I understand ATM had a return for a score, but we have showed in the past few years we can have anyone be a threat back there. Remember 2007 when Dorien Bryant and Desmond Tardy each had returns for scores.

This unit was a disaster at times last year. Valentin was a threat to score, but he needed to catch the ball first. Gravesande is sure-handed, but he's not much of a threat to break a big return. Edison seems to have taken control of the position though. He ahs the speed to break one and he has been noted several times as demonstrating sure hands.

So far, I like where we are going from this. Few teams have a weapon like Wiggs, where we can look at reaching the 40 and start thinking points. Webster seems to be promising as a freshman, while the pure speed of guys like O.J. Ross can make both return units dangerous. All need is better ball security and better coverage.