Today I am featuring one of the Mainland quartet, which is also down to a trio after the loss of Chevin Davis to grades. There is also another running back to feature, and one that could be a dark horse to see time with all the injuries at the position. 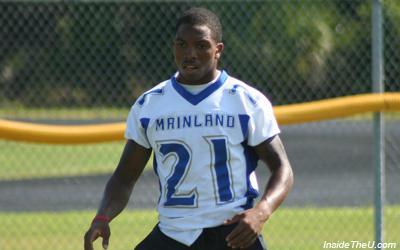 With the early reports from practice starting to trickle in I must say that I like what I am hearing in regards to the secondary. Though we must replace four starters, it appears that we have several players that could start. This is good because it breeds depth. Just because you're not starting now does not mean you can't start later. Allen is one of those players. Coach Hope has singled him out several times as a player that can play right now. This past week he stated that Allen is fast and sticks to people well, meaning he could play immediately. That is exactly what we need.

Allen comes in with four-star recruit O.J. Ross and placekicker Jonathan Linkenheimer. Ross and Allen have made each other better for years in practice and they appear to be doing the same at Purdue. It is highly likely that both will play from day 1. Both were among the top players in Florida and committed after visiting during the Ohio state upset. Personally, I can't wait to see either of them, especially if they have an inmpact in upsetting Notre Dame in three weeks.

2010 Projection: reserve at running back

White is a mystery to all

White is a bit of a mystery player. He is a transfer from the University of Louisville, but he had to sit out last year due to transfer rules. He joined up as a walk-on. He had some interesting offers when he was going through the recruiting process initially, including some interest from Michigan, but from what I can find he never played at Louisville. He saw action in the spring game, leading all rushers with 37 yards. Because of injuries to Ralph Bolden and Keith Carlos he might see some time at running back this year. He had good speed in high school, allegedly running a 4.4 40. If anyone can fill me in on his situation since it would be great appreciated.

Adam Rittenberg has a major crush on Marve.