Share All sharing options for: Know thy Opponent 2010: Wisconsin Badgers

I enjoyed my road trip to Madison last year. They have a fantastic college atmosphere at Camp Randall Stadium. Jump Around is a fun tradition that gets everyone in the stadium involved. The fans were very accommodating and friendly. I gained a few readers when they wondered why I was taking notes in the stands. Mrs. T-Mill and I even found a great microbrew in the Ouisconsing Red Ale from Central Waters Brewing Company. It was a great road trip, and it became one of my favorite spots in the Big Ten. Everything was great.

Except for the game itself. 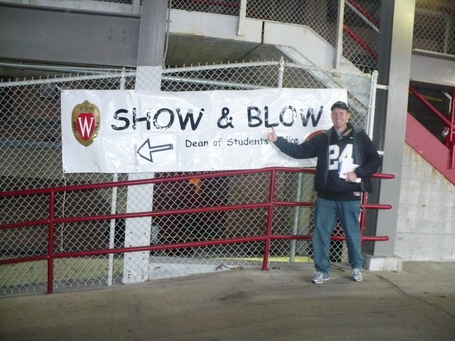 We showed, and we certainly blew

The 37-0 result wasn't as close as the score indicated. Purdue didn't even come close to scoring in what was a good old fashioned passionate ass-whipping. The Boilers were defeated thoroughly in every single aspect of the game. It was a game tape you wanted to throw away because nothing positive came out of it. That result does not make me confident for this season's game against the Badgers. They are a conference favorite and we have struggled against their physical nature for years. If Ohio State is strangely a good matchup for us, Wisconsin is a bad one. 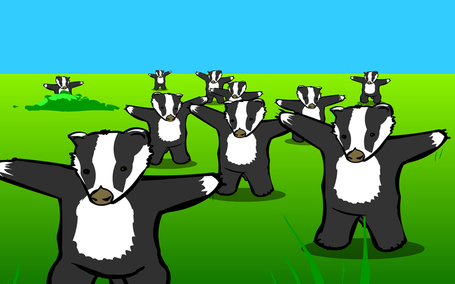 Last Season for the Badgers

We currently have our longest active Big Ten winning streak against Illinois. Our longest active losing streak is against Wisconsin, which is four games dating back to The Fumble. The badgers had an excellent 2009 season, getting to double digit wins and dominating Miami in the Champs Sports Bowl. Indeed, Miami only scored as a result of a long kick return on the opening possession and a late touchdown. They did little else the rest of the night.

Wisconsin lost to both BCS representatives from the conference in Ohio State (31-13) and Iowa (20-10). They also lost the Big Ten finale to Northwestern 33-31 before trouncing Hawaii on the road. You can't argue with a season that ends in both Honolulu and Orlando. Still, the Badgers have a reputation of being the best team in the country to not regularly be in the BCS. They haven't played in a BCS bowl since the 2000 Rose Bowl. On the other hand, they are also the only Big Ten team to ever win consecutive Rose Bowls.

Wisconsin is one of the favorites in the Big Ten because they have a very favorable schedule. They should not be challenged with a non-conference slate of at UNLV, San Jose State, Arizona State, and Austin Peay. They must go to Iowa and Michigan State, but they host Ohio State in a huge game on October 16th. Their no-plays in the conference are Penn State (good) and Illinois (bad).

It seems strange to not be talking about a fifth year senior starting for the first time with the Badgers. They are the experts in grooming a quarterback to start for one year only. Scott Tolzien started every game last year, beating out Dustin Sherer for the job in camp. He did well too, throwing 16 touchdowns against 11 interceptions and 2,705 yards. As is typical of Wisconsin quarterbacks, he had an excellent completion percentage of near 65%. If he cuts down on the interceptions this year Wisconsin will be even better.

John Clay is the real center of the offense. We never had an answer for him in Madison. He ran for 123 yards and three touchdowns against us on 24 carries. Lance Kendricks also ran for 94 yards on four carries, which is sad because he is a tight end that killed us on sweeps and had only 102 yards rushing for the season. Clay is a burly gentleman that may crush us in what will be his junior season. He ran for 1,517 yards and 18 touchdowns in 2009. He had nine 100 yard rushing games as well. Considering that we had the worst run defense in the league I would give him the ball until we prove we can stop him. Montee Ball (433 yards, 4 TD's) is a nice back that spells Clay occasionally, but there is no question that Clay is the focal point of the offense.

Wisconsin does not need a lot from its wide receivers. They are used mostly to control the game and break up the monotony of Clay pounding teams. Nick Toon 54-805-4) is the son of NFL great Al Toon and the #1 target. Wisconsin graduated its top touchdown threat in Garrett Graham, but David Gilreath (12-177-0) and Kendricks (29-356-3) give Tolzien plenty of solid receivers. Kendricks often lines up as a Chris Cooley-like H-back, leaving Jake Byrne, a 6'4" 251 pound tight end to get open as well.

What strikes me as the most scary part of Wisconsin on both sides of the ball is their physicality. They are one of the few teams that truly overpowers us at nearly every position. They have a gigantic offensive line where guard Kevin Zeitler at 315 pounds is the smallest member. Remember last year's opening drive. Wisconsin ran the ball on 11 straight plays for 80 yards and never had longer than 3rd and 3. Their line plowed the road for us and we were powerless to do anything. Gabe Carimi is a huge tackle that Ryan Kerrigan will have trouble getting around. Josh Oglesby is equally big on the other end to block Gerald Gooden. Kevin Pamphile, Brandon Taylor, and Kawann Short will have their hands full with Zeitler, John Moffitt, and center Travis Frederick. Amazingly, the group gave up 23 sacks last year. They still blocked for a running game that produced over 2,600 yards.

Remember how our defensive line dominated play against Ohio State last year? That's exactly what Wisconsin's line did against us. When your front four can stop the run and get consistent pressure on the quarterback it is very easy for the other seven guys to stop the pass. When you combine that fact with the number of drops we had, it is no wonder we were shut out. We haven't scored a touchdown against Wisconsin in our last two games. Much of that is because their D-line has been so physical. We can expect more of the same this year.

Gone is O'Brien Schofield, and his 12 sacks as one of the best rush ends in the conference. J.J Watt (44 tackles, 4.5 sacks) and Louis Nzegwu (10 tackles, 3.5 sacks) are dynamite ends to build around. Nzegwu was a force in the little playing time he saw. Watt was good enough to draw attention from Schofield. Jordan Kohout is a new starter at tackle, but Patrick Butrym played in all 13 games a year ago. This is one of the biggest defensive lines in the Big Ten. I do not like their matchup against our inexperienced offensive line that only returns Dennis Kelly and Ken Plue.

Moving a level back, the linebackers are young, but talented and experienced. Chris Borland and Culmer St. John are both sophomores, but started last season. Mike Taylor only played in seven games, but still had 46 tackles. This group didn't have to do a whole lot with the way the line in front of them dominated. Each player did manage an interception in pass coverage.

The secondary should be great behind senior safety Jay Valai and junior Aaron Henry. Valai had 51 tackles and an interception last year and should be a great centerfielder. Cornerbacks Devin smith and Niles Brinkley are good too. Smith had an interception against us and two total on the season. Brinkley played sparingly, but had 38 tackles and two interceptions. Again, as long as the defensive line is disrupting things this group does not have to do a whole lot.

Philip Welch is a solid kicker that rivals our own Carson Wiggs in terms of leg strength. He was 17 of 24 last year and he even had a 57 yard kick against Fresno State in the second game of the year. He was a solid 3-for-3 against us, but it is not like he had a tough kick. Brad Nortman returns as the punter after averaging 42 yards per punt. Since both players have great legs, Wisconsin had good coverage units in giving up less than 20 yards per kickoff and 8 per punt.

When it comes to punt returns we probably should bother punting against Wisconsin. Gilreath had a return for a score last year, as did Aaron Henry (albeit off of a block against us) and David Gilbert. Gilreath is also a pretty good kickoff returner averaging 23.7 yards per return. Considering the Wisconsin game was another game with epic special teams meltdowns you have to consider this an advantage for the Badgers.

I don't like this game for one reason: we always get pushed around by Wisconsin and their strength. We've scored three points in the last two games against them, and those were spread out over four years because of the Big Ten schedule. For some reason they just look better against us. They are not necessarily faster, but they have certainly been stronger by a wide margin. How do you compete against that?

I like that there is some youth and inexperience in their defense. It is not the same unit we faced last year with some changes in the front four and the secondary, but you know what you ate getting with Wisconsin football players. They are grinders that seem to live in the weight room. Bucky's 5th Quarter has an excellent recent article about their summer conditioning. Every team works hard, but some reason both Wisconsin football and basketball seem to work harder.

I think this will be our toughest game because of these factors. We know we can compete and hold our own against Ohio State. We have done it for two straight seasons in games we probably should have been blown out in. Against Wisconsin, we have flat out gotten our ass kicked. There is no confidence level there.

I think this is the only certain loss on our entire schedule. I just have no confidence in facing a team that has manhandled us in the past on a regular basis. Sure, we're playing at home, but Wisconsin will have only Indiana, Michigan, and Northwestern left to play after our game. If they get past Iowa and Ohio State 1-1 or better, they will likely be playing for a trip to Pasadena. I don't see us getting in their way.

Wisconsin rolls over us with power and John Clay. Maybe if we don't drop the ball like it is coated in grease we have a chance, but I doubt it. Wisconsin 24, Purdue 7.