Today's featured players have yet to see the field for us, and neither likely will in 2010. Mike Lee is an incoming linebacker that is very likely to redshirt given the sudden depth at the position. Josh VanZant is a transfer from the University of Southern Indiana that walked on last year. Still, they are on the team, which is more than I can say about myself.

VanZant is a former high school teammate of T.J. Barbarette, who achieved legend status during fall camp of Tiller's final season when he was known as, "the short, fast guy." VanZant hasn't made that kind of impression yet, but he was an academic all-state selection his senior year of high school. He is majoring in history and had a school record in the 200 meters. He was also a wrestling team captain before taking off for Southern Indiana.

At Southern Indiana VanZant was primarily a track athlete. In fact, USI does not even have a football team. That means he has been away from the game for a couple of years, though he did sit out last year after transferring. That gives him a slim chance of seeing the field this year. 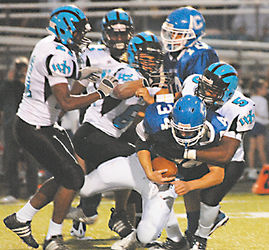 I could see a future at defensive end for Lee. He was a three year starter as a linebacker and tight end at Woodland Hills, but his basketball and track and field background shows he has some speed and skills to work around bodies. Those are qualities I like to see in a good rush end. Last season he helped Woodland Hills make the State playoffs with 14 catches for six touchdowns on offense and 17 tackles with six sacks on defense. He left his final high school game with a concussion as Woodland Hills lost to Jack DeBoef and State College High.

It looks like we're getting a solid player with Lee. He was a two star selection, so he will very likely redshirt this season as we try to find a position for him. he was documented heavily int he Welcome to the Fold Tracking last fall since he was one of our early commitments.

Scout.com: 2010 Michigan State Preview
Here is a nice preview of Michigan State. Like us, they have some nice schedule breaks that could make for a bigger than expected year.

Jackson's speedy recovery
Hat tip to the Paint Crew's Twitter feed for this one.