45 Days to Purdue Football: Will Lucas

Share All sharing options for: 45 Days to Purdue Football: Will Lucas

Of all the members of the 2010 recruiting class I think I am most excited to see today's featured player. Lucas was unrated for most of the recruiting phase. He was awarded a generic 3-star rating after a successful season playing for a top 10 high school program. Now he is ready to challenge for playing time. 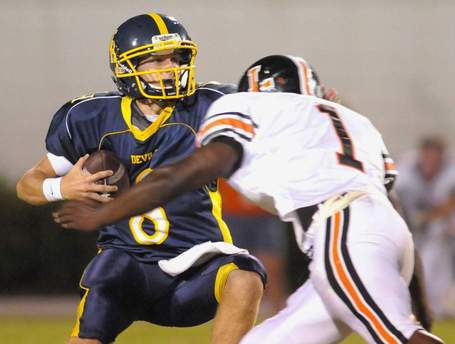 Go get the ball, Will

Ideally I would like to see Lucas redshirt this year. With the depth we have at linebacker we know five guys are coming back to play in Jason Werner, Joe Holland, Dwayne Beckford, Antwon Higgs, and Chris Carlino. Lucas doesn't have an eye on redshirting though. He enrolled early so he could go through spring practice and ended up running with the #1 defense for most of the camp. He even won the team's newcomer award. Both Higgs and Werner were absent, but it was still impressive that he drew notice.

Lucas was one of our earliest 2010 commits. He played this last season at Lakeland High in Florida, which was ranked in the top 10 nationally and even had an ESPN game at De la Salle out in California. In 2008 he played against Gabe Holes and St. Thomas Aquinas in the Florida 5A State championship game. His numbers and awards were impressive. He was named the Bright House Defensive Player of the Year Award winner as senior (presented to top player in Florida from Orlando area up to the northern state line), Polk County Defensive Player of the Year, and he had 164 tackles. For his career he had 315 tackles and even blocked three kicks, showing that he could have a home on special teams this year before becoming a starter next year.

I think there is little doubt Lucas is going to play this season. He needs to bulk up a little, but he has great linebacker instincts and clearly knows how to find the ball. He is a kid that is used to playing in big time games. He couldn't come from a more successful high school program. I have a feeling he will be one of the most underrated players of this entire recruiting class.

Kyle Adams Nominated For Good Works Team
Kyle Adams is receiving recognition for his charity work done off the field.

FanTake | Home
Hat tip to Twitter follower Barking Carnival for pointing out this preview of our game against the Hokies in the ACC/Big Ten Challenge.