Today's player is physically the biggest recruit of the 2010 class. He was the only dedicated offensive lineman we picked up, and we managed to grab him right out of Penn State's back yard. He was also very nearly a state champion. 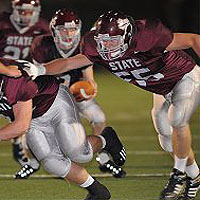 I think DeBoef will be a very solid linesman in a year or two. He comes to us tall, but with plenty of room to put on weight. I am kind of surprised he got away from Penn state. State College high is even called the Little Lions. These Lions were state runner-up last season in Pennsylvania's Class 4A. Along the way they took out incoming recruit Mike lee's Woodland Hills team in the playoffs. During the season he also played against Cody Webster (our new punter) and former commit Jeremy Cornelius.

DeBoef was a team captain this past season, proving he has some natural leadership skills that will translate nicely to our level. He has already made the move from center to offensive tackle, something that is more befitting his tall frame. I suppose it is possible that he could make a run at the open right tackle job, but I think it is more likely he will redshirt and add muscle in the weight room. South Carolina was one of the schools going after him, as well as Michigan State, Maryland, NC State, and Temple. The Gamecock fans had quite a thread about him too.

For those interested he already has a football card available on Ebay. Central Daily was also very excited about his commitment and seems to think he will fit in well in the Big Ten.

Three and Out...Looking at the First Three Weeks of Non-Conference Play, Part 1 - The Rivalry, Esq.
The Rivalry gives us a good shot of taking down the Irish. I hope they're right.

Scout.com: 2010 Illinois Preview
A seven win season for Illinois is predicted. It might take a small miracle for that to happen.