Two of the biggest memories from last season were long field goals from Carson Wiggs. The first was his 59 yard bomb in the opener against Toledo. The second was his 55-yarder just before halftime against Ohio State that gave us the lead for good. Neither of those would have been possible without our next player. 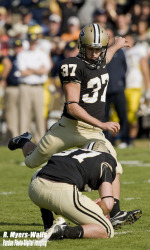 Staats, like previously profiled long snapper John Finch, is a former walk-on that has worked hard and found himself on the field at a niche position. He took over as the holder on field goals and extra points once Curtis Painter got hurt against Minnesota in 2008. I am not sure if it was Painter's fault or what, but we instantly got more consistency on field goals once Staats took over. I had a theory once that the reason for Chris Summers' struggles were because of Painter as the holder. He struggled in 2006 and 2008 with Painter, but had a great year in 2007 with Jared Armstrong.

Wiggs was 14 of 21 last season with Staats as the holder. As mentioned, Staats was the holder on the school record 59-yard kick against Toledo. It appears that Staats is in line to be the holder once again in 2010. That gives Purdue consistency at all three critical positions on kick placement attempts, something that can't be underestimated.

Staats did originally come to Purdue as a wide receiver and played one game in 2007 against Eastern Illinois at the position. He was an all-state player at LaPorte high school with 49 receptions for 1,034 yards and 12 touchdowns as a senior. That year he made the South Bend Tribune's football dream team. He was also the main player on the basketball team both as a junior and a senior.

Kris is a management major looking to graduate after this season. He also apparently once had a YouTube video full of hilarity, but it has since been removed. I think we need to have a campaign to bring this back.