Our next player in the countdown came to Purdue as one of the highest rated recruits of the past decade. He has since played nearly every position it seems except kicker and quarterback while doing whatever is needed of him to help the team. He enters his final season as a tight end looking to turn some heads. 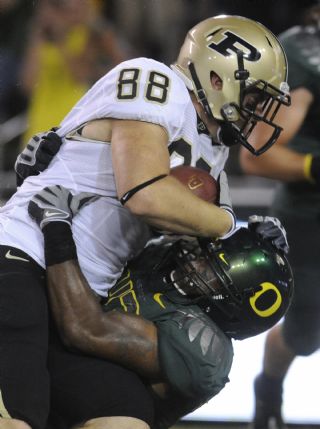 When Lindsay came to Purdue part of the 2006 recruiting class he was the highest rated player in that cycle. He was listed as a Rivals four star linebacker. Considering all the troubles we had at linebacker since he has been here I am shocked that he never got a look there. We beat out Iowa, Michigan, Michigan State, and Wisconsin for his services. In high school he played safety and quarterback, but we recruited him originally as a linebacker.

In 2006 he did not play as he redshirted. In the process, he moved to fullback. His contributions there were small, but he caught three passes for two yards and two touchdowns in goal line situations in 2007. In 2008 he caught one pass for eight yards before moving over to tight end. That is where he found a home last year with 16 catches for 162 yards. His 56-yard catch and run last year at Michigan set up what would prove to be the game winning score.

Lindsay is expected to have a big senior season sharing tight end duties with Kyle Adams. Both are mostly co-starters at this point. He will be a key safety valve for Robert Marve as we look to mix up the offense even. He has also proven himself to be a solid goal line target in the past, so look for more of that there. He will graduate this year with a degree in Organizational Leadership and Supervision.