Today's profile is on one of the top recruits of the 2010 class and a player that may make an immediate impact with an opening at defensive tackle this fall. It is appropriate that he may begin his college career against Notre Dame because the Irish went after Mr. Bruce Gaston fairly hard. 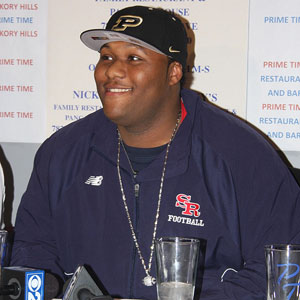 This man may start immediately

I wrote extensively about Gaston when he committed back in January. His combination of size, speed, and strength makes him the rare possible starter at a position where nearly everyone redshirts, especially at Purdue. Gaston comes in as a hungry player. During his commitment press conference he mentioned playing for a Big Ten and National Championship. That is a pretty lofty goal, but you might as well go for it.

Gaston had 99 tackles and 16 sacks last season. Those incredibly impressive numbers for a defensive tackle that show he was very active in seeking the ballcarrier. That made him an all-ESPN Chicago player. His commitment was the biggest news nationally for Purdue just before signing day.

I like Gaston as a possible starter from day one at defensive tackle next to Kawann Short. He has the size to play right now and he seems like a player that will work to start from day one. If he is willing to work I think we have a guy that will be a solid contributor for four years.