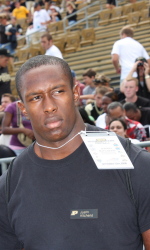 Justin is a bit of a project looking for a secure place with Gerald Gooden, Ryan Kerrigan, and Kawann Short all returning as starters. Most of his playing time will likely come in 2011 and beyond, but he could exhibit something in possible blowouts against Western Illinois, Toledo, and Ball State. At worst, I expect him to play against the leathernecks because we should win that game by a lot. I am probably the only person that won't play that day.

Kitchens comes from Warner Robins, GA, where he was a two-star athlete recruit according to Rivals. He may yet move around on defense because of his size. Mississippi and East Carolina showed him interested, but he was largely unheralded after making 55 tackles and five sacks as senior. He is currently majoring in movement and sport science. In searching for more info on him I couldn't find much, although strangely the following picture was the #3 picture on a Google search for him. I think I speak for all men when I say that is a fine addition to the team.