In continuing our look at defensive linesmen due to the nature of the numbering scheme we have another highly touted freshman to look at today. Rashad Frazier was one of the late additions to the 2010 recruiting class, but the defensive end was a solid pick up. 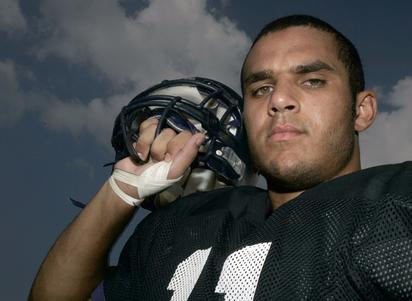 Can you imagine this guy as a soccer player?

Frazier was another early February commitment just before signing day, but he came in as a high three star prospect at Defensive End. He was kind of lost in the shuffle with the commitment of Bruce Gaston, but he is still a quality player. He will be an interesting prospect in that he only played football as a senior at Middletown, but was good enough to warrant a 3-star ranking by most services. West Virginia, Michigan state, and Wisconsin showed him some interest, making him a good Midwestern commitment.

Middletown made the Ohio state playoffs for the first time in 19 years a season ago with Frazier notching 55 tackles and 5.5 sacks. He was also a baseball and soccer player for two years when he attended high school in Maine before transferring to Ohio. The idea of a 6'5" 235 soccer player is frightening for me, so that is quite surprising that he would play that sport. Middletown finished the year with a 10-2 overall record and second round playoff loss in the state tournament.

His lack of overall experience likely makes him a redshirt candidate, but he appears to be another lean speed rusher that has been so successful at Purdue.