Since most guys who wear numbers in the 90's are along the defensive line this new feature feels like a focus group on that specific unit. Today is no different as the featured player of the day is expected to be a key contributor in 2010. 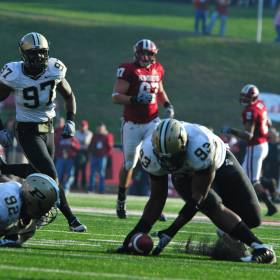 In a connection between the football and basketball teams Kawann is part of the reason E'Twaun Moore is so successful. The two were teammates on East Chicago Central's 2007 Indiana Class 4A State championship team. Short had a solid game in the championship, scoring 20 points and pulling down 10 rebounds as Central defeated North Central and Eric Gordon (who, according to some, is a legendary player at Indiana and an example of why we can't get good recruits even though he accomplished very little there). Memphis' Angel Garcia was also on that team and scored 25 in the championship.

Short stayed with football, however, and his athleticism has paid off. In just one season on the field he has secured a spot as one of the best players on defense. He had a pair of interceptions last season, including a nifty one-handed pick against Toledo. College Football News was so impressed that they named him a redshirt freshman All-American. He had 41 tackles, with four for loss as he anchored the middle of the defense with Mike Neal.

Short will be a key to Purdue's success in 2010 as the boilers must improve an awful run defense. Short will be at the front of that. Coach Hope seems to think he may be the defense's best player when motivated. Off the field Short is majoring in Organizational Leadership and Supervision.