Once again, we have another possible contributor along the offensive line today. That is what happens when three spots need to be filled. You get a lot of guys fighting for those three spots. Today's featured player has an inside track, however, as he is a fifth year senior with starting experience. Will that make a difference? 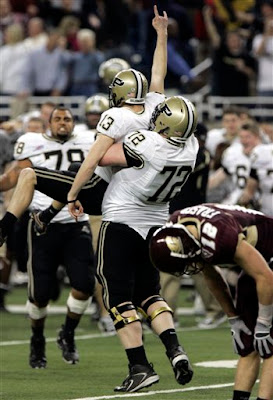 Our offensive line appears to be taking shape. We know that Ken Plue will be starting at right guard and Dennis Kelly will be starting at left tackle. Andrew Brewer probably has an edge to start at center. Leaving the right tackle and left guard positions open. As previously discussed, Rick Schmeig, Trevor Foy, and Ryan Prater appear to be competing for those spots, but Pierce has the most game experience of them all.

Pierce has always been there, ready to play without securing a full-time starting position. As a redshirt freshman in 2007 he played in 11 games and started the final three at right guard. In 2008 he played in nine games and started the first five at the same position. Unfortunately, he saw his playing time diminish. He only saw action in a pair of games last season. The health and fitness major has been passed by other players in the past, but those eight starts of experience could pay off as we look for consistent performers. Last year he was listed behind Plue at right guard, but if he can make the move to left guard there could be a place for him.

Ultimately, I think it comes down to Schmeig and Pierce for the left guard spot. Even if he doesn't win the job Pierce will be a valuable backup.

Kramer, Grant await next step | jconline.com | Journal and Courier
Chris Kramer and Keaton Grant are still looking at pro opportunities. I have noticed Kramer's Twitter feed as he has been all over the country trying out for NBA teams.

Spotlight on former Purdue QBs | jconline.com | Journal and Courier
Drew Brees, Len Dawson, and Bob Griese all recently appeared in West Lafayette. That is three Super Bowl winning quarterbacks, and all three will likely end up in Canton.