With no #95 on the roster we jump ahead to the first major contributor of the season in #94 Ryan Kerrigan. Not a lot of people outside of West Lafayette know a whole lot about Ryan Kerrigan, except for Terrelle Pryor, of course. Pryor has gotten very familiar with Kerrigan over the past two seasons, and that is a major reason that Kerrigan will be a huge key to Purdue's success in 2010. 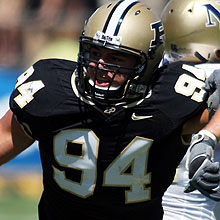 I was a big fan of Kerrigan's before he even came to Purdue. He is a North Central Conference guy like myself in high school, and I got to see him play a couple of times back then. The NCC used to be a premier football conference in Indiana, but it now suffers from quite a dearth of talent. While in high school Kerrigan helped Muncie Central achieve its greatest success on the football field by winning three sectional titles in four seasons. The Bearcats were never quite able to get past the regional, however, even losing as an undefeated team to conference rival Logansport when Kerrigan was a sophomore. Logansport avenged a 41-14 regular season defeat that year in the regional.

In high school Kerrigan was a pretty decent tight end, catching 40 passes for 789 yards and six scores as a senior. On the defensive side of the ball he was an absolute rampaging beast with 90 tackles and an astounding 19 sacks as a senior. He also helped Muncie Central's basketball team to back-to-back state runner-up finishes to Lawrence North and some guy named Greg Oden.

I don't think it is a coincidence that Kerrigan has some basketball in his past and he is now one of the best defensive ends in the country. Being a post player in basketball is all about positioning and leverage, which is critical when you're trying to get past a hulking 360 pound offensive tackle.

As mentioned above, Kerrigan has a history with Terrelle Pryor. In the last two games against Ohio State Ryan has owned him to the tune of five sacks, a couple of forced fumbles, and a fumble recovery. Purdue is looking for more of that as Kerrigan currently sits fifth on the school's list with 21 total sacks. He forced seven fumbles last year as well, nearly setting a Big Ten single-season record.

Kerrigan is likely Purdue's best shot at having a first round draft pick if he can recover from the foot injury that has sidelined him since last year's Indiana game. He has the potential for an All-American type of season after being named All-Big Ten a year ago. He was also an academic All-Big Ten selection and 2nd team Academic All-American as a math education major.