So far, the countdown has been a parade of freshmen and fifth year seniors. Only Kawann Short, a redshirt sophomore, has been a middle-classman on the list. That changes today with sophomore defensive end Eric Mebane. 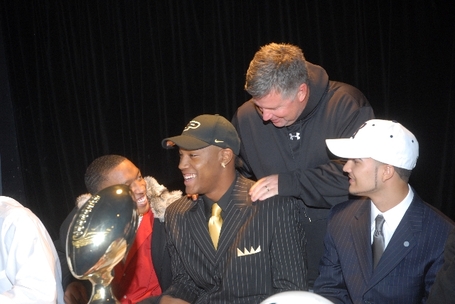 Mebane was all smiles on signing day in 2008.

Mebane was a member of Joe Tiller's final recruiting class in 2008. He redshirted his first season, and saw no action last year as a redshirt freshman. Arkansas, Missouri, Iowa, and Utah were some of the better programs that were showing him interest, but he was only a two-star recruit in one of our lowest rated classes ever. Currently, he is majoring in Communications, so may God have mercy on his soul since I also hold a Communications degree from Purdue and I haven't had a regular job in five years.

Like most two-star recruits, Mebane was a good, but not great player in high school. He was an all-district selection as a senior with 82 tackles, 23 for loss, and 16 sacks as a senior at Bowie High. He concentrated on team success, helping Bowie to a 12-2 overall record and a deep run in the Texas State high school playoffs. More recently, Bowie was unfortunately in the news for the death of a player following a workout. His class at Bowie was quite accomplished, as 15 players went on to play college football at some level.

It is hard to project where Mebane is going to end up in his career at Purdue. With three years left, now is the time for him to find his place and make a name for himself. Unfortunately, the minute may not be there at defensive end this season. He will have to make an unexpected leap to get into the two deeps after fall practice begins.