Our next player is a testament to patience in getting to Purdue. He has traveled the same road that Dwayne Beckford did in that he had some eligibility issues in his first year out of high school, but they were cleared up and he is now in West Lafayette as a freshman. 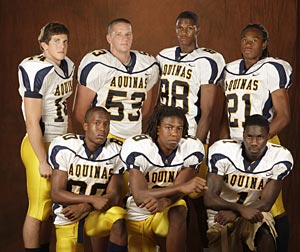 Holmes (#88) won a mythical National Title in high school. That gives him more than Jimmy Montana.

Purdue had a pair of players in spring football that were considered early enrollees with Holmes and Will Lucas that hailed from a pair of Florida's top high school programs. The pair faced each other in the 2008 Florida state championship game which was won in a blowout by St. Thomas Aquinas. That gave them, and Holmes, the mythical high school National Championship.

That is when things got weird for Holmes. He was originally scheduled to be at Purdue last season, but he was unable to enroll until January because of an issue with the NCAA Eligibility Center. It did not end up costing him a year of eligibility, however, and his presence for spring football this year gives him a chance to see the field as a true freshman in the fall. While Jeff Lindsay and Kyle Adams are the top two guys Holmes may play with an eye toward gaining experience for 2011

Holmes father was a long jumper at the 1984 Los Angeles Olympics. That means Holmes has some good genes, and they showed by his high school numbers. He had 18 catches for 480 ayrds and three touchdowns for the national Championship team. He missed three games with a thigh injury, but he was also a pretty good basketball player too. He was good enough that he played on the same AAU team as Gary Bush down in South Florida.

We should be excited to have Holmes on board. The author of the Miami Herald's Hurricanes blog was disappointed Holmes didn't end up at the U. Instead, he'll be catching passes from Robert Marve in Old Gold and Black.