Here on day three of the countdown we take a look at the first regular contributor of the past few seasons, as today's focused player is fifth year senior John Finch. 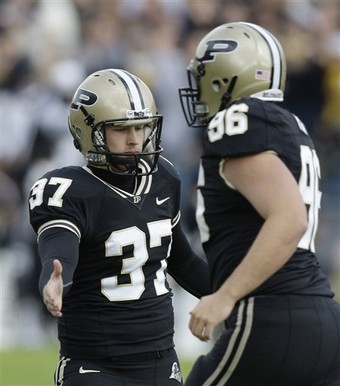 Finch is a former walk-on from Carmel, Indiana and has been the long snapper for the past season and a half. He took over midway through the 2008 season when Andy Huffman suffered an elbow injury. He has since solidified the position and has started the last 17 games at that position. Among his highlights was the fake punt direct snap to Anthony Heygood in the 2008 Michigan game. Heygood busted off a big run that set up a critical touchdown in that game. To my knowledge he hasn't had a bad snap in a game yet, which is exactly what you want out of a long snapper. He also saw brief time as a tight end against eastern Illinois in 2007.

Finch is majoring in Economics and he is already setting things up for life after football. He is a member of Sigma Chi and he has performed volunteer work for the Brees Dream Foundation down in New Orleans.

John is expected to be the starter once again at long snapper, proving that perseverance can pay off in playing time even for unheralded walk-ons. Finch plays at one of the most overlooked important positions on the field. Each field goal, extra point, and punt cannot be successful without him.