In comparison to our Big Ten brethren Purdue has not done well on the National stage. Every member of the conference has double digit National titles except for Northwestern. Even the Wildcats now have six thanks to the dominance of their women's lacrosse team. This is far from the same recognition that a basketball or football championship would bring, but it is still an incredibly positive bit of news for the school.

Even though Purdue came into the championships ranked seventh you had to think they were one of the teams that had a shot. Purdue was runner-up in 2007 and had the individual champion last year in Maria Hernandez. They were also playing on a Pete Dye designed course. Dye happens to be the designer of both Purdue home courses, so I am sure there was an advantage in that. Bear in mind, I have played golf exactly twice in my life and show little to no natural aptitude for the game, so I have no idea if that previous statement is true or not.

Purdue started off strong by shooting a 284 combined score on day one, good enough for second place two strokes behind USC. Day two wasn't as good as they slipped to third by eight strokes behind the Trojans. It was on day three that the Boilers truly won the title. Purdue recorded the third-lowest round in school history with a 280 to take a seven stroke lead into the final round. That was a lead they would squander as USC had a strong final round, but couldn't gain separation.

I spent a good portion of my afternoon tracking the scores as USC and Purdue went back and forth on the back nine. Purdue's final golfer, Maude-Aimee Leblanc bogeyed the last hole to leave the door open for USC. A birdie by the final USC golfer would have forced a playoff, but she missed her put by less than an inch (as you can see in the highlights) to give Purdue the title.

I won't pretend to be a golf writer anymore. I covered a high school tournament earlier this week and that's about the extent of my experience. Instead, I'll simply offer up congratulations to Leblanc, Numa Gulyanamitta, Paula Reto, Laura Gonzalez-Escallon, and Thea Hoffmeister for bringing home Purdue's third National Championship 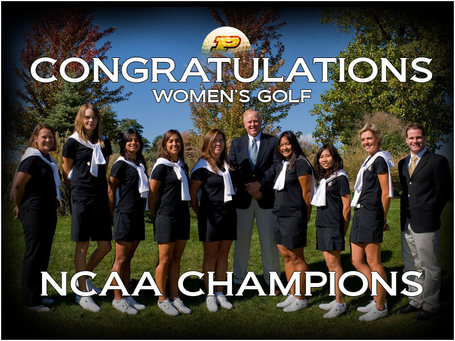