Welcome to the Fold: Robert Kugler

Share All sharing options for: Welcome to the Fold: Robert Kugler

Purdue has long been behind the game a bit in terms of getting its first football recruit of an incoming class compared to its Big Ten brethren. In each of the last two years we have had to wait until late June before Ishmael Aristide and Charles Torwudzo, respectively, announced they were headed to Boilermaker country. Last night Purdue moved a little bit closer to the rest of the Big Ten as it earned its first commitment for 2011 with tight end Robert Kugler from North Allegheny High in Pennsylvania. 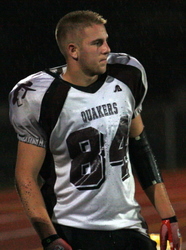 Kugler is currently unranked through rivals and listed as a defensive end, but he was recruited as a tight end. According to GBI, he is more of a blocking tight end than a pass catcher, but he expect to expand his game. Blocking should definitely be a positive for him. His father, Sean Kugler, is the current offensive line coach for the Pittsburgh Steelers.

Kugler has pretty good size at 6'3" 240 and his 40 time is listed at 4.85. More importantly, I like that he has a spotless 4.0 GPA. That means we're getting a smart player that can learn fairly quickly. His list of offers is a testament to his intelligence as he had a chance to go to schools like Stanford, Pittsburgh, and Syracuse. This kid was definitely garnering some national attention with schools from Boise State to Florida Atlantic showing interest.

Scout ranks Kugler as a three star prospect and the #18 tight end in the class of 2011. Since we lose multiple tight ends after this season in Kyle Adams, Jeff Lindsay, and Jeff Panfil. He'll be competing with Colton Mckey (who will be a senior when Kugler arrives) as well as incoming freshmen De'Ron flood and Gabe Holmes. If he moves back to defensive end we can certainly find a home for him as well. I hear we have a pretty good track record of sending defensive ends to the NFL.

This will be Kugler's first season at North Allegheny. Since his father just moved to the Steelers after being coach of the Bills' offensive line, Kugler played last season at Orchard Park High in New York. He finished the year with 64 tackles and two forced fumbles, which led to a lot of attention from Syracuse. He was Syracuse's first offer in this class. Kugler was named to the All-Western New York Defensive First Team this past season, and his younger brother, Patrick, was a promising freshman. Obviously, should Patrick develop into a nice prospect we would have an advantage to get him as well.

I haven't been able to find any video on Kugler, but this seems to be a pretty solid recruit. The article above from Orchard Park seems to be lamenting the loss of him and his brother quite a bit. Orchard Park went 7-2 last season, losing in the second round of the state tournament to North Tonawanda. He also seems like a guy that had his heart set on playing in the Big Ten. Based simply on the list of interested schools it seems like we have a solid start to the 2011 class.