Share All sharing options for: Where amazing (almost) happened

I am a sports freak and a basketball addict. Obviously, if you have been here long, you know this. I am such an addict that I keep an Excel spreadsheet of different high school, college, and pro arenas I have seen a game in. By my count for basketball alone I have been to 81 Indiana High School gyms, five college arenas, and three pro arenas. This doesn't count baseball, football, and hockey arenas I have been to. I had never been to a Final Four, however, and that is why I wanted to go last night. I wanted to check it off of my life's sports list, and possibly see history in the process. 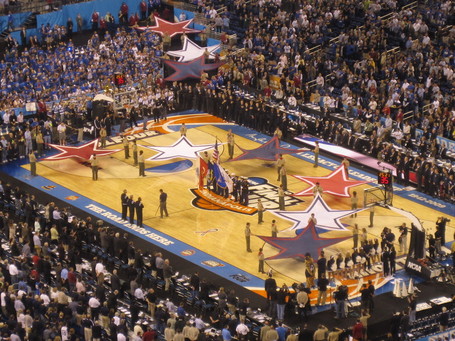 If Gordon Hayward takes the slightest bit of strength off of that final shot I would have seen history. Also, all basketball would have been spoiled for the rest of my life. Think about it. If Hayward hits that half court shot to win a National Championship for Butler, what else could top it? Selfishly, only a Purdue National Championship would top it. In overall terms of basketball history I don't think you could ever see anything greater than if that shot had dropped. Maybe if a 16 seed makes a run to the Final Four.

The atmosphere in Lucas Oil stadium was incredible in the final minutes. Of the near 71,000 people I would say that easily 55,000 of them were pulling hard for Butler. I was sitting way up in the corner next to a very nice Duke fan. As we talked during the last timeout both of us came to the same conclusion: it was playing out exactly like the movie Hoosiers. He even went as far to say they should run the picket fence on the out of bounds play. Butler got it to Hayward, Duke played excellent defense, and I think Butler got a little complacent. I think they simply stood around and waited for Hayward to do something and as a result they got a decent, but not great look on the fade away.

When Butler tried to inbound the ball before using their final timeout with 13.6 seconds left Veasley Got loose on a curl and had an open lane to the basket with no one in front of him. Hayward was looking the other way, however, and had to call a timeout. If he hits the bounce pass Veasley either scores or gets fouled from behind. On the next play Butler looked to Hayward and only Hayward, but Duke played great defense. They even switched to Howard as the inbounder to get Hayward the ball.

On both plays, plus Hayward's heave, the place was ready to explode. It just felt like Butler was going to win when they got the ball back down one in the closing seconds. Even on the heave the place just stopped as the ball hung in the air. I thought of Evan Turner's shot against Michigan a few weeks earlier. When it bounced out and fell to the floor there was a great gasp. The Duke fans went nuts, naturally, but it was like no one cared they had won other than their own fans.

When the season started I kept this weekend hoping to see Purdue play in Indianapolis. While that didn't happen, I am still glad I kept it open and got to attend this game. It was the 50th different basketball game I have attended this season between high school, college, and pro. By far, it was the best. I will always remember not that Duke won, but that I was there when Butler very nearly made history. My allegiance is still with my Boilers, but there is no shame in watching this Butler team play the game the way it should be played. Again, the only better way to wrap this season up would have been if the Boilers were on the floor last night.

As for the Hammer & Rails Tournament challenge, we do have a winner. J. Egert is our winner by having the best bracket among the four people who picked Duke. Please e-mail me at tmill99@gmail.com so I can get your address for your prize and set up your guest entry. BTW, Mrs. T-Mill would have won had Purdue made it to Indy.

I'll leave you with a few shots from last night. Once again, major thanks to KJ from The Only Colors for hooking me up with the ticket. 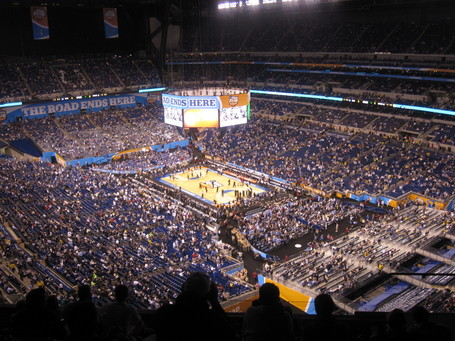 The non-zoomed view from my seat. 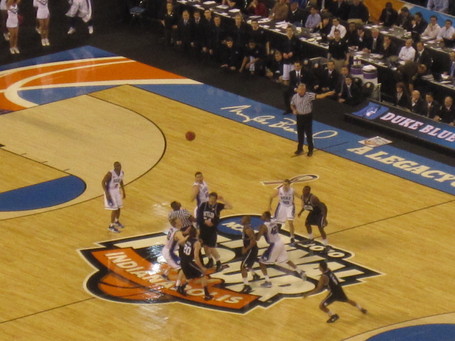 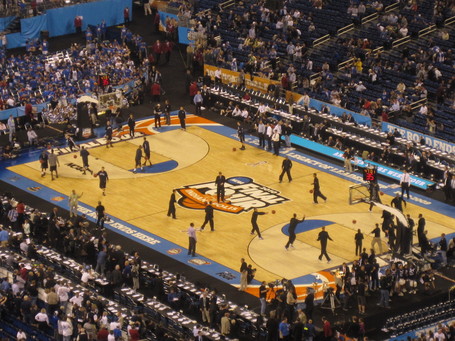 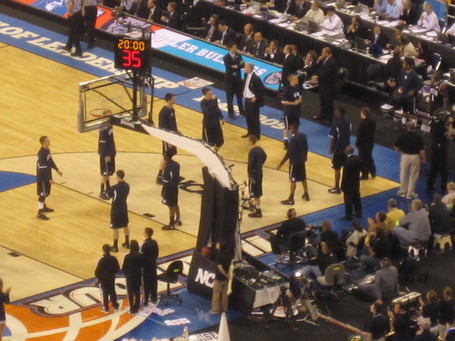 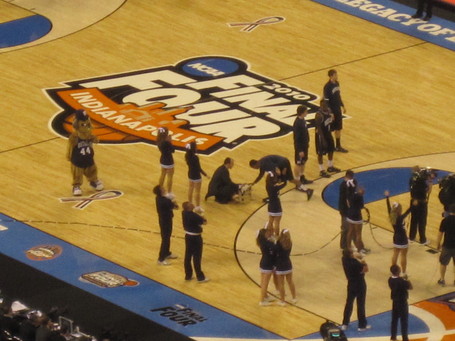 Bulldog Blue getting his pre-game petting 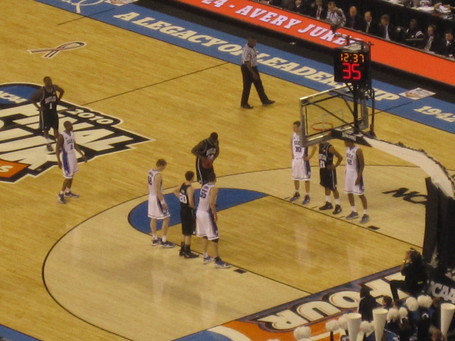 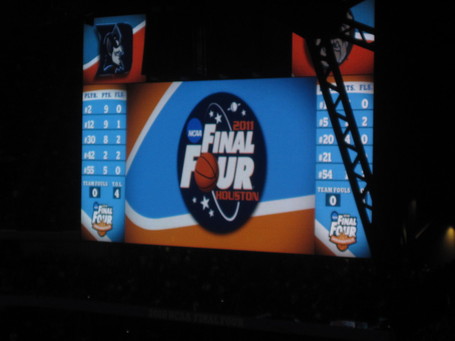 A subtle reminder of where I expect all of Hammer & Rails Nation and Purdue to end next season.