Share All sharing options for: Notes from Final Four weekend

I have a closet full of Purdue stuff. By my count I have four football jerseys, two basketball jerseys, two hooded sweatshirts, a nice pullover fleece, and numerous T-shirts. Being at the epicenter of the Final Four this weekend means I may have to add something though. I may have to ask my Butler friends if there is still room on the bandwagon for Monday night and buy a shirt from one of the dozens of vendors on the streets of downtown.

Naturally, I have been tracking Butler through this tournament. They are a fun team to watch and I love seeing games at Hinkle Fieldhouse. I was twice asked this year to do games (vs. Siena and Ohio State) for Rush the Court Live from Hinkle. One of my fellow KHS alums, Alex Anglin, is a walk-on and the first player from Kokomo to ever reach the Final Four. This is from a program that has produced dozens of Indiana All-Stars and two Mr. Basketballs. Butler was on my final list of schools before I chose Purdue, right up there with Ball State and Bradley. In a way, I was very close to becoming a Bulldog and this blog would officially be invaded by every anti-Duke fan in the country. As it is, since Butler has no home on SBNation I'll offer this place up as a temporary forum for Butler fans.

Yesterday, I tried to remain neutral, as I wanted to support Michigan State for conference affiliation and Butler because they are so much fun to watch. I no longer have to remain neutral. I attended the Candlebox free concert last night right downtown and it was crowded with Butler and Michigan State fans. I received plenty of Boiler Ups and high fives because I was in my Purdue hat, but what got more attention was my Hickory letter jacket. I got this jacket several years ago for the column I write at Hickoryhusker.com. Everywhere I go I get a ton of compliments on it, and one time a guy tried to buy it off of me. One (very drunk) Butler fan at the concert last night loved the jacket and kept commenting on how a Butler-Purdue final would have been awesome.

Don't we all know that. 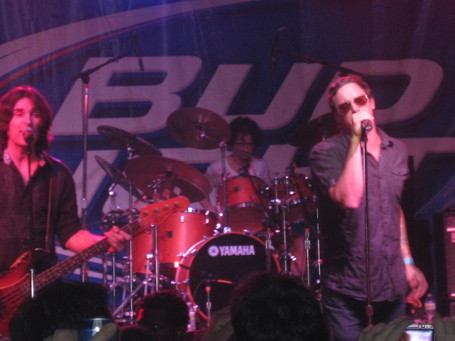 Candlebox took us all back to 1994 for one night. With the Hickory jacket I was trying to take everyone back to 1954.

Reader A. Reynolds with the bracket Juan Moore run 4 Kramer is also a Butler fan. He (She?) will win the Hammer & Rails Bracket Challenge if Butler wins since none of the entries picked the Bulldogs. Should Duke win, our winner will be J. Egert with the jmpurdue5117 entry. Considering the vast majority of entries picked Kansas it is amazing we have a winner at all. If each of you could e-mail me so I can set up your guest entry and get you your Wooden book if you win I would appreciate it.

There is some other news this weekend, making for a mini-sort of Boilermakings.