It may be safe to call Purdue the worst historical baseball program in a BCS conference. With one NCAA Tournament appearance and no Big Ten Championship in 101 years it would be hard to find a program with more irrelevancy than the Boilers. Strangely enough, one of those streaks could very well end this season. After losing the first two series of the year to Minnesota and Michigan by two games to one margins, the Boilers made a huge jump in the Big Ten standings last week. Purdue swept three games from Penn State and after winning midweek games over Chicago State and Wabash College they are the hottest team in the conference with seven straight wins overall. 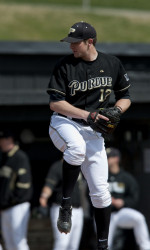 Purdue is home to the Big Ten's best pitching staff by ERA.

The overall mark is now a solid 22-14 after a 1-6 start to the year. More importantly, Purdue is figuring out how to win close games after losing a bunch in the early going. In the Big Ten their 5-4 mark is good for a four-way tie for third place with Michigan State, Indiana, and this weekend's opponent, Northwestern. All four of those teams are tightly packed behind Ohio State and Michigan at 6-3 in the conference. This is where Purdue has an advantage. The Buckeyes still must face the Wolverines and a struggling but solid Minnesota squad. The same is true for Michigan. Purdue's toughest remaining series is in two weeks against Michigan State (24-10 overall). If the Boilers can get through the next three weekends against the three teams they are tied with they finish the year with Iowa and Illinois, who are both currently out of the Big Ten Tournament. Since Purdue does not play Ohio State in Big Ten play the stage is set to  finish conference play strong in the final 15 league games.

Northwestern has been a fairly weak Big Ten team over the past few seasons, but they have won series with Minnesota and Penn State to this point. They also took a game against Ohio State. This is just their second road series in conference play, but they did take two of three at Penn State. On Friday we should have an avantage as Matt Bischoff is one of the best #1 starters in the Big Ten. Bischoff leads the Big Ten in strikeouts, is 6th in ERA, and 3rd in wins. His 5-1 record has come with the Boilers winning all three Friday games in Big Ten series to this point. Bischoff also needs seven strikeouts to tie for the most in school history.

Bischoff will face David Jensen (1-2, 6.47 ERA). On Saturday Northwestern will throw 2008 Big Ten Freshman of the Year Eric Jokisch (3-4, 5.06 ERA) Jokisch has been as automatic on Saturdays for Northwestern as Bischoff is on Fridays for Purdue. The Wildcats have yet to lose a Saturday game, while Purdue is 1-2 on day two. Matt Morgan was recently moved from Sundays to Saturdays for the Boilers, and his 3-1 record with a 4.47 ERA will be a nice compliment to Jokisch.

The Sunday starters have yet to be announced, but Matt Jansen moved back into the rotation last week to start game three against Penn State. For all the troubles the bullpen gave Purdue earlier in the season, the staff seems to be coming together at the right time. The team ERA is solidly below five and they have a 2-to-1 strikeout-to-walk ratio. They have a 3.29 ERA during the current seven game winning streak and teams are hitting just .222 against them.

Let's not get too excited, however. The seven wins have come over the last place team in the Big Ten, an awful Chicago State team, Illinois State, Ball State, and Division III Wabash. We're not exactly striking out the '27 Yankees. The pitching staff will be tested by a lineup this weekend that hits .303 as a team. Paul Snieder and Chad Noble are two of the conference's best hitters each averaging better than .380. Northwestern only has 15 home runs on the season, but they excel at small ball. For good measure, Snieder is one of the best closers in the conference with a 1.85 ERA and seven saves.

Purdue should be favored to take at least two games in the season. They have been playing very good baseball of late and have even cut down some on errors. Purdue currently has the best team ERA in the Big Ten and best opponent's batting average. Offensively, Purdue leads the conference in total hits and is third in batting average. If they keep those numbers up they could find themselves in first place at the halfway point of the season. Look for catcher Kevin Plawecki (.371 average) to have a big series after missing the midweek games.

If you go: and don't want to get rained on:

(All games subject to weather, which is dicey this weekend)