On the topic of Big Ten Expansion: Some radical ideas.

Share All sharing options for: On the topic of Big Ten Expansion: Some radical ideas.

In attempting to keep up with the news over the course of the weekend I saw what is creating a buzz with everyone involved with the Big Ten. As we are starting to see, it looks like the Big Ten expansion talk has taken a major step forward. All the signs seem to be pointing toward this thing happening over the course of the summer. With the Big Ten football schedules set through the 2012 season we probably will not see any official changes take place until 2013, but I know the conference can always go in and change things to get the new team(s) on the schedule earlier. I don't think we would see said new program(s) until 2012 at the earliest. It seems the only question left is what form will expansion take?

If Notre Dame is going to join a conference, this is the best deal they will ever get. If they eventually cave and join the Big East in football they would do so because they think they can dominate a weaker football conference, but the financial incentives would not be there. If they join the Big Ten they will reap some massive financial rewards, but it will be at the cost of further slipping into irrelevancy. As I have said many times, Notre Dame would be at best the fifth best team in the conference behind Ohio State, Penn State, Wisconsin, and Iowa. There would, of course, be a huge boost to their profile at first as all the analysts talk about them adding their history to the Big Ten, but in the long term they will struggle to stay at the top level of the conference because they have not been a legitimate national power for far too long. I am not saying they will be terrible. They can be a consistent bowl team and they can threaten for a conference title every few years, but I don't see a sustained run of success and dominance like we have seen from Ohio State and Penn State over the past 10 years or even the steady winning of Wisconsin since the mid-90's. Notre Dame still perceives themselves as that type of team like it is their birthright, but that is simply not the case. Their best bet to make that perception a reality is to stay independent, schedule favorably, keep a coach for longer than five years so he is allowed to build a program, and start winning games.

Would Notre Dame accept being in the middle tier of the Big Ten? Would it be worth giving up their sweet deal and special BCS rules that assures a massive payout if they can manage nine wins? As much as I dislike the Irish, I think they would be stupid to give up the current deal they have because it is a pretty sweet deal. All they need to do is win nine games and they will be handed a BCS bid and a giant check. No one else in the country has that deal. The only question they then have to ask themselves is if the shared revenue of joining the Big Ten would be worth more than that deal. With what they have now, they know they are selling out every stadium hey play in and they can schedule who they want to on their terms. They can maintain their relevance on name brand alone, which does make them very unique. Ultimately, I think they will say no simply because they know deep down they will not dominate the conference like they think they should. They can, however, do that in a much weaker Big East.

As The original Chicago Tribune article mentions, however, It could be big for Notre Dame. They stand to gain somewhere in the neighborhood of $7 million annually. In terms of other sports, they have some excellent programs. They have played in the College World Series more recently than any Big Ten team. Their women's basketball team has a National Championship and was a top 5 team for most of this year. They also were an NCAA team in men's basketball. They would have natural rivalries already in place and what Purdue fan doesn't want to see the long dormant basketball series renewed? Obviously, football is the key to any move, but bringing in the other sports is not a bad side deal.

If the conference does only want one team, I have another radical suggestion. Why not pay the University of Chicago a heaping crapload of money to re-start its athletic programs and come back as a member? Even though they left the conference in 1946 they still have more total conference championships in all sports (73) than Penn State (45) Purdue (66), and Northwestern (68). They are also not that far behind Michigan State with 78. They are also still academically linked with the conference, so it would even save a step. Think of the buzz it would generate too. The Big Ten Conference has always prided itself on being the standard-bearer in collegiate athletics, so this would be a bold step to collectively re-ignite the program of one of its original members. 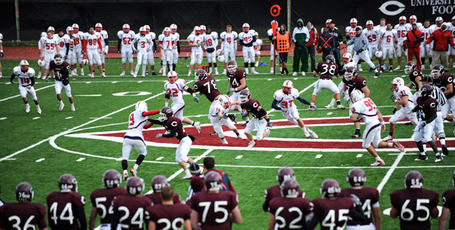 Even Indiana might get a regular conference win if the University of Chicago returns.

This seems like it would be too much, especially when it comes to basketball, but the Big Ten has the power to do it because of the unique position of the Big Ten Network. We may mock the Barbasol ads, but the Network has been a major success. They brought Midwest cable providers to their knees and and it generates enough cash for every university to buy a lot of pancakes. Who would be the three though? Would the conference raid the Big 12 for three teams? The Big East? Would they do a combination?

A lot of people have thrown around Texas, but I just don't see it happening. I do, however, think it is more likely in a multiple school scenario depending on who comes with them. If they can get a couple of schools to come along that will continue to provide competition for their top notch baseball program (it is a revenue generating sport for them) they might listen.

In a three-school scenario we could see a multiple-conference defection with Iowa State, Missouri, and Pittsburgh. In terms of forming new rivalries and fitting in those schools might be best. Iowa State has a thing with Iowa, Missouri with Illinois, and a long-dormant rivalry with Penn State could quickly be renewed for Pittsburgh. You could have any number of three teams, so anyone who says they know exactly who the three would be is lying.

In terms of scheduling, things would be harder to do. We'd have a pair of seven team divisions, making it tricky to schedule for football. You would play the other six teams within your division, likely three at home and three on the road. That leaves two conference games (one home, one road) to alternate with the other seven teams. The division champs would then play a conference title game, probably alternating between Indianapolis' Lucas Oil Stadium, Chicago's Soldier Field, and Detroit's Ford Field.

I think with the multiple-team scenarios we lose the likelihood of Notre Dame. That is especially true with 16. I don't see the conference adding five teams unless they can make a huge splash with multiple "name" programs. They would have to dream big here. I am talking adding the likes of Texas, Florida, Tennessee, Notre Dame, and Oklahoma. Once again, the conference has long been the stand-bearer in collegiate athletics. A move like this would end all doubt about the "best conference" arguments.

I still think it is highly unlikely though. That is just too much to do in too short of a time. Also, scheduling, especially in football, would be a nightmare. The Big East has 16 teams in basketball and their scheduling is a joke. Each team plays 18 games, meaning that there can be a maximum of three home and home games if each schools plays the others once. There is no way you can get balance with that. In football it would be worse with two eight team divisions.

I do remember seeing at The Rivalry a radical proposal that would create four four team divisions. I have no idea how you would decide the conference title game representative out of that, but it would be cool to figure out.

Here is an interesting final thought: What if the Big Ten decided to open things up and allow some schools to add only certain sports? What if they convinced Duke to join, but only for basketball? What about Notre Dame, but only for football? The schools could then maintain their original conference affiliations for other sports, but jump in to what would be perceived as the top conference in that respective sport. It would never happen, but I thought I would toss it out there.