Gold and Black Game, The One Purdue Always Wins

Share All sharing options for: Gold and Black Game, The One Purdue Always Wins

Yesterday marked the Boilermakers' annual Gold and Black spring game. I managed to crawl out of the hole I live in thanks to senior design and make it out to the game. In what is becoming a Purdue off-season tradition, a team decimated by injuries took the field, with no Ryan Kerrigan, Keith Smith, or any running backs. Last year, as we all remember the game was played without a healthy set of knees on the entire offensive line. Still, set against the backdrop of an unseasonably cool day, and the inaugural running of the Electric Vehicle Grand Prix, football was in the air.

The Big Ten Network brought along an 8 foot tall Drew Brees bobble head to promote their upcoming Big Ten Icons series. This seemed to be the highlight of the day, since every time I looked over, there was a crowd of people waiting to take a picture with the plastic Super Bowl champion. If you get a chance to come to the spring game next year, by all means take that opportunity. Now that the spring game is not just a sideshow for Grand Prix, they have a player autograph session, lots of Boilermaker football alumni, and they were giving away tons of poster and free stuff at the Spring Fest carnival on campus.

Speaking of alumni, some famous former Boilers were on hand, including;

As for the game, both Marve and TerBush took the lion's share of snaps with the Black team, whereas Najee Tyler and Skyler Titus led the Gold squad. Rob Henry split time evenly between the two squads. If today was any indication, Robert Marve will be the opening day starter. He was the first starting quarterback for the Black squad and led the Black team to a 31-10 victory over the Gold. After the jump, I'll go over some of my observations from the spring game. For now, here are some pictures from Ross Ade. 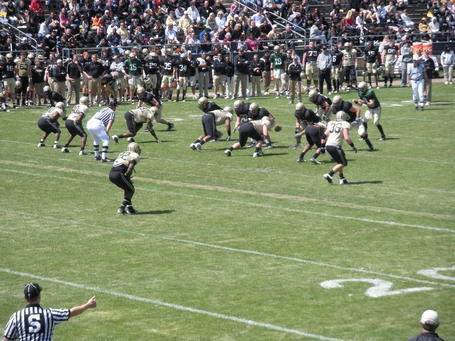 Caleb TerBush leads the Black squad on another scoring drive. 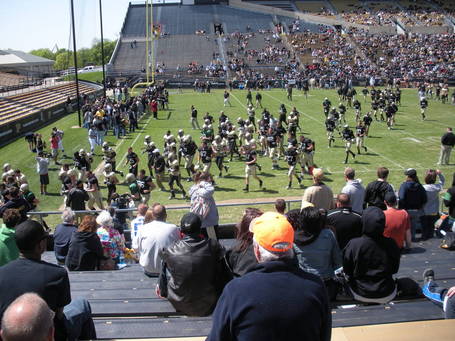 The Boilers head in for halftime. This is the biggest crowd I can remember for a spring game. 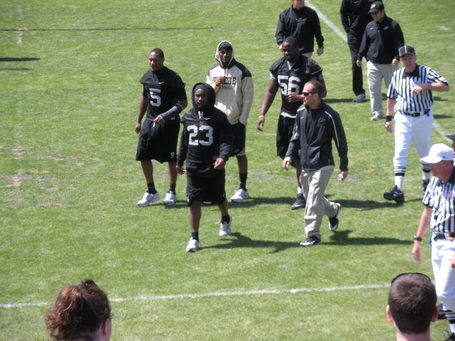 The injuries at running back make it hard to see how this offense will function when opening day talent is on the field. Playcalling was very pass heavy, but there are the top 2 backs. 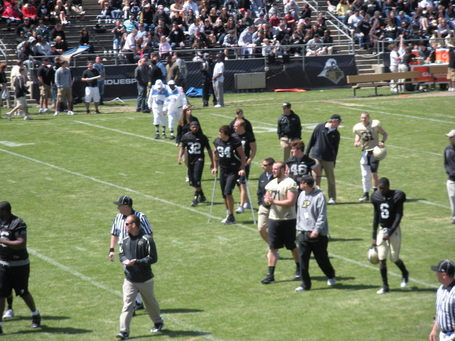 Same story on the defensive side, though the line didn't seem to miss Kerrigan or Werner much... 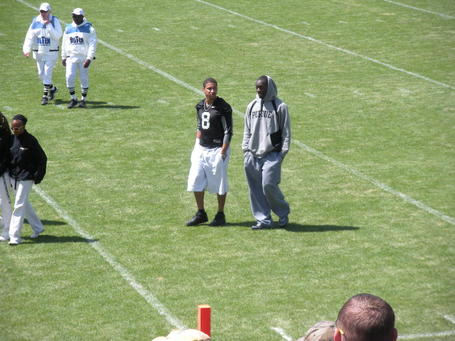 No Keith Smith also made it difficult to envision a Purdue offense, since he will most assuredly be the #1 wide out. 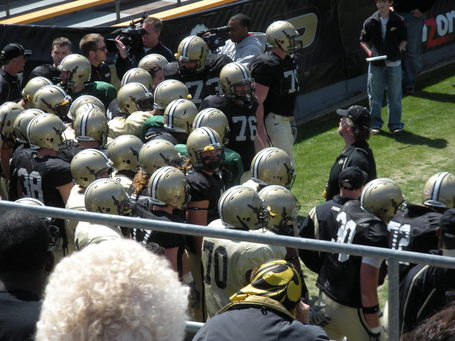 I did not mean to offend you, Chris Carlino, who is bigger than I am, with that picture. I apologize. 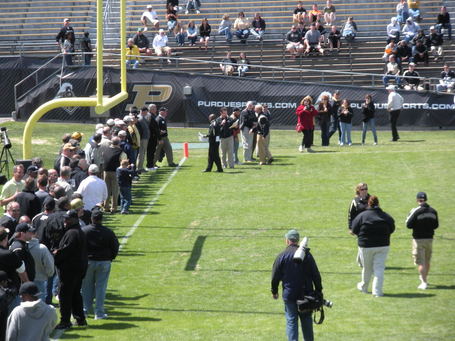 Boilermaker football family reunion. The 2001 Rose Bowl team was in attendance, and there was a representative from every team going back to 1944. 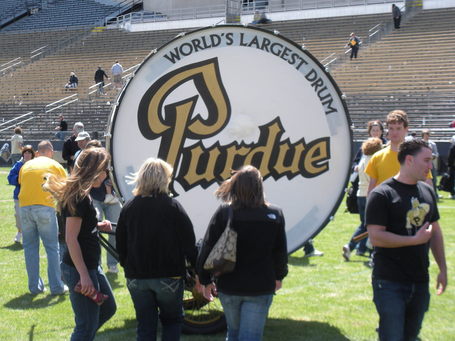 The post game picture and autograph session included a chance to have a crack at the World's Largest Drum. We are not worthy.

Positives from the Spring Game;

Caleb TerBush - TerBush lead the offense on two very efficient scoring drives On the day he went 13 for 18, 147 yards and 2 scores. He was especially sharp in the short and mid-range game. TerBush completed a couple long downfield passes, made his reads very well, and never seemed confused or out of control. Watching him play, it was very difficult to imagine that he had never started before. TerBush was very natural at the quarterback position, and every series he ran was efficient and methodical. He seemed to be having the least trouble moving the offense down the field. I wouldn't be surprised at all to see him pull the starting job from Marve, but I am very sure that we will be seeing him on the field in some situations this fall. Not that Marve played poorly, but TerBush definitely played the best quarterback yesterday.

Prepare to hear that a lot from IU fans this year, since the cradle is full in West Lafayette. Marve also played a fantastic game. He was hampered by some drops (more on that later), but had great pocket presence and awareness. He was mobile, and made great moves in the pocket while patiently running down his progression. He pulled down the ball and ran when it was time, but never to a fault. If he could have just stopped rocketing the ball to receivers, he might have avoided some drops. Marve also had the play of the day, a 75 yard touchdown strike to Cortez Smith. Marve seemed to be very comfortable going deep, and has the patience to let the routes develop and find the open man. Coach Hope called some very aggressive deep plays with #9 running the show, so Basketball on Grass is probably making a comeback to Ross-Ade. I hope this is a taste of what's to come, and not just relying on the pass because the stud running backs were hurt. I like the new offensive attitude, going back to being the Gold and Black gunslingers of the Big Ten. Is it September yet?

Secondary - As we all know, the entire starting secondary from last season was lost to the march of time and graduation. However, there doesn't seem to be too much to worry about. In general, the secondary played very well. Many passes were contested and deflected. Man coverage was tight, and the safeties made very good reads on where to go with help. Holes in zones were minimized, and consequently, so were yards after the catch. Even though the secondary was tested deep by Marve, their play limited him to 11 for 22 and 160 yards. Last season, the secondary was key in the huge upset over Ohio State, and keeping the Boilers in tight with Oregon and Notre Dame. This crew seems to be capable of that same kind of disruption. I am not saying that this secondary will be one of the better ones in the Big Ten, because it is easy to look good without Keith Smith to defend, but I think this crew can give the Boilers that spark they need to win a game they wouldn't otherwise.

Kyle Adams - Solid performance by all of the tight ends, but Adams stood out. He looked much better catching the ball. The Boilers have lacked a good receiving option at TE since Keller graduated, and Adams could fill that role going into his last season. Adams will be much more of an offensive threat this season, and will play a more prominent role with the mobile quarterbacks.

Running Backs - Depth will not be a problem at RB. Antavian Edison played very well. He found some holes, and made it through a few tackles. He also caught 3 balls for 31 yards and a score. T.J. Barbarette is also a receiving threat out of the backfield, and he has the quickness to hit the edges. Again, there isn't too much to learn here, since Bolden and McBurse were sidelined, but it seems like there are some dangerous receiving backs waiting in the wings.

Negatives from the Spring Game;

Offensive Line Depth - 9 sacks. 9. The Gold squad offensive line had more holes than Swiss cheese. On top of that, there were 4 more tackles for loss. Najee Tyler and Henry barely had time to think before defensive players were on top of them. The primary gold team running back, Javeare White, ran 11 times for 37 yards. They played poorly in pass protection and run blocking. This was a defense missing Jason Werner and Ryan Kerrigan that still managed to put 13 tackles for loss on the gold squad. I would not trust these linemen to stop Big Ten linebackers and defensive ends. Unfortunately, given the nature of line play, some of these guys will see significant action during the season. I just hope they can work out the kinks as a squad before they are the only thing standing between our quarterback and 1000 pounds of Ohio State defensive players.

Drops - In general, the receivers played well as a unit. However, our good friend the dropped pass made his presence known. Even though the coverage was good, I counted 7 dropped balls that should have been sure catches. It could just be emotional scarring from last season, where a few key drops and muffed kick returns cost us so much, but it stung every time I watched a guy put two hands on the ball and see it wind up incomplete. It seems like the receivers were running good routes, but they weren't finding enough space and they'd hear footsteps, or they took their eyes off the ball to plan the run after catching it. All credit to the secondary, who played quite well, but if a few balls had been caught that should have been it may have been different. The absence of Keith Smith hurts, but you need to come down with those passes.

Special Teams - I would say that the most glaring weakness from last season was special teams. Our return coverage was very suspect, and to say that the return game was turnover prone would be the understatement of the year. That weakness still remains. The coverage seems to have improved, but I think that was a symptom of a very poor blocking scheme. Nearly every punt ended in a fair catch where the return man had to run under the ball at the very last second. There was very little lane integrity for blockers and it just seemed that blockers were content to give ground up to the point that they were so close to the return man it didn't make a difference. There has been some improvement in that there were no turnovers on special teams, but I expect better than that since we are one of the few teams that has a special teams coach.

After the game I talked with a few of the players about next year. Of course, every player will say "January bowl," or "Rose Bowl," but you need to see whether they believe it or not. This is a team that isn't trying to convince you that they can make it to a Rose Bowl and they aren't trying to convince themselves. This is a team that is saying, matter of factly, "Whatever you expect from us, we believe that we are capable of achieving this goal."

That is the attitude that I want from the football team. Remember Tiller's last season, where the prevailing opinion was "We aren't going to be good, but we will run some trick plays and have some fun." Last season, no one expected the Boilers to be any good, but we put up a fight and turned some heads while rebuilding. This year, the team is ready to make noise in the conference race. This team is not content to be an also-ran in the Big Ten, and if they can fix some flaws, they could be in the conversation when November rolls around. The same team that was so close in so many games last year has gotten better in seemingly every aspect. Will this be the year that the good guys bring home the conference title? Probably not, but they are a lot closer than they were last spring. That's all we can hope for. Who else is ready for fall?