Welcome to the Fold: Braxton Shelton

Share All sharing options for: Welcome to the Fold: Braxton Shelton

I need to take a day away from basketball because it is making my head hurt. I am officially ignoring all mainstream media, both positive and negative, about Purdue because they really don't know what they're talking about anyway. If I see one more "lucky to make the Sweet 16" prediction I am going to scream. Here is the bottom line: We're still getting a high seed and a favorable path to the second weekend. End of story.

In the meantime, I did want to share some positive football news because it is also something very close to my heart. As many of you know, I am a diehard Kokomo Wildkats basketball fan. I am already trying to figure out next Saturday's schedule and how I can attend the Big Ten Tournament semi-finals as well as the Marion Regional if Kokomo makes it. According to my mother, who attended senior night last Friday night, one of the current Kokomo players has decided to attend Purdue next year and attempt to walk-on for football. 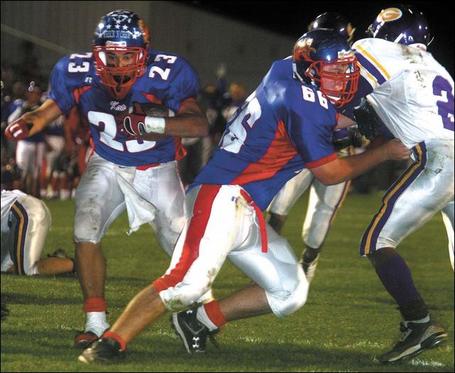 Meet our new walk-on running back

His name is Braxton Shelton, and this is the first year he has played varsity for basketball. He plays about 5 minutes per night and is a tough nosed hustling kid that does all the dirty work. In football, however, he is very decorated. He has been the featured running back for Kokomo over the past three seasons, amassing a 25-2 regular season record and three straight undefeated North Central Conference championships.

He finished his career this past fall with 4,182 yards and 70 touchdowns, both school records. His 4,182 career rushing yards tops the mark set in 1996 by Dondre Johnson. He broke the record by almost 900 yards. Johnson, you may remember, was recruited by Purdue and redshirted the 1997 season. He played quite a bit in the 1998 season as our #2 running back before a knee injury against Michigan State ended his season. He then suffered a pretty serious concussion in the offseason that ended what was a promising career.

What I like about Braxton is that he is a tough player and a very hard worker. He is a kid that you want as a walk-on because he will truly earn any playing time he receives. Opposing coach Bucky Kramer of Logansport also had some very kind things to say about Braxton's character after Kokomo beat Logansport this past season.

I got to experience that character first hand this past season as I covered the game against Muncie Central in which Shelton broke Dondre's record. He broke the record on a 45 yard touchdown run, but the first thing he did was slap the helmets of all of his offensive linemen. He also gave them credit in the post-game interview when I talked to him about the record. His coach also point out that he was a great blocker for Kokomo's other running backs.

Part of the reason that Shelton was able to rack up so many yards is that Kokomo runs a heavily run-based offense. It has been described as a wing-T in a phone booth, as everyone but the wings are up on the line and stacked shoulder to shoulder. It is strictly power football, and only this season did Kokomo install a few more passing sets to prepare for state tournament play. Normally, they only throw about three times per game. It is effective in North Central Conference play, but while Kokomo is 21-0 over the past three years in conference play, they are 5-5 outside of it and 1-3 in state tournament play.

It should also be pointed out that the North Central Conference, while great for basketball, is pretty lousy for football. Kokomo plays in Class 5A for football, which is dominated by Carmel, Ben Davis, Warren Central, etc. As long as they are playing in the NCC they are fine. If they play a state power though, watch out. Among their five losses the last three seasons are a 42-3 loss at Carmel and a 42-7 loss to Ft. Wayne Snider (another state power). They have also lost to mediocre teams from Noblesville and Harrison that play in a much tougher conference. In that time Kokomo is usually winning games against NCC competition by 6 touchdowns, so there isn't a lot they can do when they aren't really challenged for seven games per year.

What is going to hurt Braxton at the next level is that he is a smaller back without a ton of speed. His ESPN profile lists him at 5'9" 204, but with only a 4.87 40 time. He makes up for that in toughness, and you can see that on the basketball court. This is a kid that comes off the bench and scraps for every loose ball and rebound. He does a lot of Kokomo's dirty work off the bench, and he has helped the Wildkats to their best regular season in 13 years at 15-5. He provides a spark of energy almost every time he enters the game. Even in Kokomo's worst loss this year, a 47-44 loss at Frankfort in a game they had no business losing, Shelton was the lone bright spot. That can carry over to football.

As far as his role at Purdue, it is up in the air. Obviously, he has to make the team first as a walk-on. Even then, he would almost assuredly redshirt. I could see him becoming a solid special teams contributor and maybe even a third down back by the time his career is over, but he is obviously a more long-term prospect as opposed to an instant impact guy. Still, it is nice to have him aboard. He would have a positive impact in practices at the very least.

A selection of YouTubes for Mr. Shelton