We interrupt this Robbie Hummel news-fest with some other Purdue news to distract us, at least for a few minutes. I do want to thank all the fans of other schools that have stopped by lately wishing us well without Robbie. You guys are what being fans is all about. That is true class. It is amazing to see the Big Ten community rallying around us and even saying we deserve the Big Ten title because of our play before this.

Even though I can look out my window and still see a 6 foot high snow pile, baseball season starts today for Purdue. Most of college baseball started on last week's uniform start date, but Purdue waited until this week with the second annual Big Ten/Big East baseball Challenge. The event is going on in the St. Petersburg-Clearwater, Florida area and features all ten Big Ten baseball programs (Wisconsin does not have a team) against the Big East. 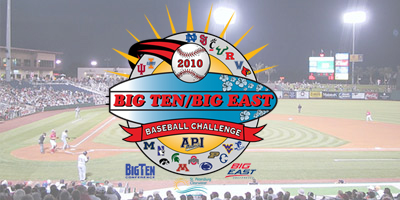 From most of the previews I have seen, Ohio State and Minnesota are the heavy favorites in the Big Ten this year, with Purdue being on the fringe of one of the six Big Ten Tournament slots. The early results have backed those projections up, too. Ohio State is off to a 3-0 start after winning last week's North Florida Tournament. The Buckeyes are even ranked 21st in the ESPN poll. Indiana may have had the best win of the early season as the Hoosiers took one of four at #23 San Diego. Illinois and Penn State are the only other conference teams that have yet to play a game, but both had games cancelled due to weather last week. Illinois even had scheduled an absurd pair of home games because of the usual balmy weather that Champaign is known for in late February.

Purdue will be facing Villanova today at 1pm, Cincinnati tomorrow at 1pm, and Rutgers Sunday at 10am. The Boilers have also added an extra game to the schedule, as they will face West Virginia on Monday now. That game is not officially part of the Challenge, but it is a good addition.

Villanova Wildcats (3-0) - Villanova comes in fresh off a three game sweep at Norfolk State to start the season. Purdue has never faced the Wildcats in baseball. Villanova scored a total of 30 runs in its three wins, so it will be a challenge for Purdue's pitching staff. Pitching is expected to carry this team the Boilers this year, as all three weekend starters return. The bullpen is supposed to be deep as well.

Cincinnati Bearcats (1-2) - Purdue began last season with an 11-10 win over Cincinnati and they lead the all-time series 10-5. It surprises me that two schools relatively close together haven't played more, but ah well. Cincinnati won its season opener 5-3 at Florida Atlantic (a pretty strong south Florida team), but were shutout 3-0 and 9-0 in the remaining two games of the series. The Bearcats managed only eight hits in the last two games against the Owls. They play Penn State today before facing Purdue.

Rutgers Scarlet Knights (0-3) - I know a little bit about Rutgers as they opened the season last week against my wife's #12 Miami Hurricanes. They weren't very competitive in the first two games, but they took a lead into the bottom of the ninth in game three and had two our before freshman Zeke DeVoss hit a walk-off 3 run home run. That home run was set up by an error that would have ended the game two batters earlier, and it gave the Canes a 9-7 win. Miami won the previous two games 12-1 and 10-8. Rutgers will play Iowa and Northwestern before facing Purdue.

West Virginia Mountaineers (0-3) - West Virginia has had a very rough beginning to the season. They played in a tough tournament in Myrtle Beach and lost all three games to Kentucky, #19 Coastal Carolina, and Virginia Tech. In those games they were outscored 24-5 and the closest was a 4-2 loss to Coastal Carolina. They will face Indiana, Iowa, and Michigan State before facing Purdue. It should be noted that the Chanticleers are one of college baseball's better teams and they were a regional host last season, so it is a good sign they played them tough.

Here is the Purduesports.com official preview for the weekend, including links to where you can follow the games. Collegebaseball360.com also has an excellent preview of the weekend action. That site will also be webcasting the event live beginning at 10am.