Seeing the future: a profile on Travis Carroll and Terone Johnson

Share All sharing options for: Seeing the future: a profile on Travis Carroll and Terone Johnson

Saturday was a self-imposed basketball orgy. I attended two games and watched the Purdue game on TV in the middle. This was after covering a game Friday night in Richmond. Such is life this time of year, but I would not have it any other way. Saturday night was special though, as I worked out my basketball coverage schedule so I could get paid to see Danville take on North Central. Unless North Central meets New Albany in the semi-state it will be the only time this season that two Purdue signees will face each other. It was a chance to see what the future of Purdue basketball looks like, and it looks very, very good. This is even before you factor in that we are in the running for Johnson's 2012 teammate D'Vauntes Smith-Rivera.

This was a great game to attend because they are two great teams. Yes, there is some fantastic individual talent, but Danville came in at 18-0 and ranked #1 in Indiana's Class 3A. North Central was ranked #2 in 4A (Indiana's largest class as much as I despise the distinction) and were 16-3 after getting upset Friday night at Center Grove. That loss broke an 11 game win streak for North Central. If you look at the state's coaches poll, which ranks teams regardless of class, North Central was #2 while Danville was number #5. For the record, Donnie Hale down at New Albany was ranked #6 in the coaches poll and #4 in 4A.

Carroll and Johnson did not disappoint, either. North Central won the game 76-63, but only pulled away late as Carroll got in foul trouble and the Panthers slowed the game down, made the most out of each possession, and hit free throws. It was a five point game with about five minutes to go. Here are my thoughts on each player: 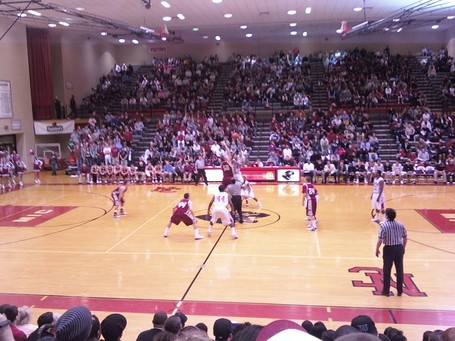 Carroll and Johnson tip off against each other in front of a packed house.

Travis Carroll - 6'10" 235 pounds - Danville, IN HS - I don't think I am overstating this, but Carroll could play for us right now. At 6'10" he would have enough size to play in the Big Ten. He is also bigger than JJ at 235 pounds. That's 20 more pounds than JJ has before he even sets foot on campus and gets into a Big Ten weight room. What impressed me the most was his footwork. He was often double and sometimes triple teamed, but he had a variety of post moves that got him to the basket. He's not afraid to dribble, as North Central was pressing and he brought the ball up against the press a few times. This led to one particularly stunning dunk where Carroll got the ball 25 feet from the basket, saw an open lane, and made a loping two-handed dunk that I was afraid was going to break the goal.

The game was pretty physical for Carroll. North Central is a big team with most guys in the 6'3"-6'4" range. Most of the guys are also fairly strong since North Central is historically one of the better programs in the state. They have a weight program equal to that of a small college. They were bumping, pulling, and shoving him all night, but Travis later stated he has gotten that all season. I talked to Travis after the game about that physicality and he saw it as a positive.

"It's good playing a team of this caliber because if we do something wrong it really stands out. That will help us learn for the tournament. Their physicality helped a lot. Teams have been like that all year. I have learn off of that, watch it on film, and digest it during practice."

Travis showed he had some range too. He was able to hit a couple of 15-foot jumpers, so he is not totally limited to the basket. He also had a pretty nice basketball IQ because he didn't attack the basket every single time he got the ball. He often passed the ball out for better scoring opportunities once the defense collapsed on him. He only officially had one assist, but this is an area where he certainly can grow.

Carroll's final line for the night was 25 points, nine rebounds, one assists, four fouls, and 25 minutes played. He picked up his fourth foul on a questionable call with 6:31 left and had to sit for about three and a half minutes. North Central used that time to expand the lead from five to eight, and Carroll did not score even when he came back in with three minutes left. He is a player that is great when he can be assertive, but if you limit that via fouls he can disappear some.

Obviously, it is very early for him. He can finish is year as a state champion as there are few teams in 3A that can match his size. He has a nice supporting cast around him too. Classmate Jordan Weidner had 19 points and he helps take away some of the focus on Carroll. The luxury Carroll has once he gets to Purdue is that he won't be immediately expanded to replicate his high school numbers. Should JJ return, we can bring him along slowly. We can even pair them together at times to be totally devastating down low. I can see JJ in the high post with Carroll down low and no one knowing how to defend them.

I think Carroll will see big minutes next year. He is fairly polished coming in, more so than Patrick Bade. If JJ returns we will have more size than we know what to do with. (That's what she said).

Terone Johnson - 6'3" 208 pounds - Indianapolis (North Central), IN - Where do I begin with Terone Johnson? He is already big enough and strong enough to be a Big Ten shooting guard. At 208 pounds he is muscular, allowing him to handle the rigors of being bumped around. He has excellent leaping ability that allows him to elevate above smaller defenders. In this game he rarely used his jumper. Instead, he played down low, often attacking Carroll directly on offense or defending him. He held his own too. He finished with a team high seven rebounds, but he was even more impressive by scoring 30 points on 13 of 22 shooting. 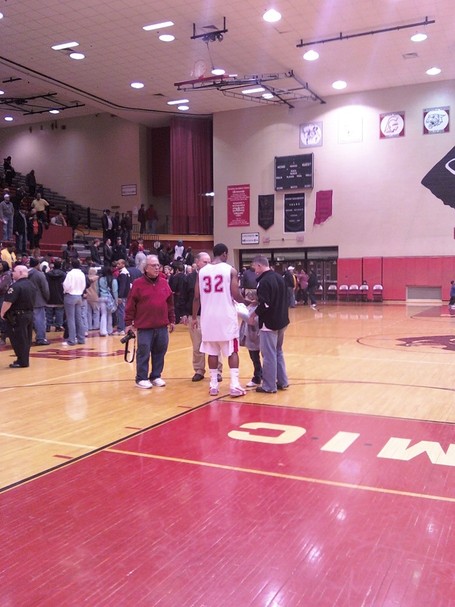 Terone reminded me of a young E'Twaun Moore in that he can create his own shot. He was not afraid to drive even when facing a Big Ten caliber center in the middle. Four of his seven rebounds were offensive, which led to putbacks. He didn't hit a 3-pointer, but he was 4 of 5 from the line. Any time North Central needed a basket they went to Johnson just as we go to E'Twaun. I can definitely see him being E'Twaun's young ward next season before assuming that role in the 2011-12 season.

What amazed me the most is that Terone has such control of his body in the air. He knew exactly what to do in order to adjust his shot once airborne on the drive. He sued his size as an asset too, giving him leverage with his shoulders on the drive. That is the mark of a smart player and a scorer. The thought of pairing him with Kelsey Barlow two big, physical guards in a few years is titillating. Travis even has some nice things to say about him:

"What impressed me was that he works so hard to get the ball. Against our 2-3 he worked constantly to get to the open spot on the court. He would flash down low or up high and he had a good, quick jump over everyone. I wasn't surprised he came inside so much because he's a big strong guy that wasn't going to back down."

Depending on who returns next season, I am not sure where Terone plays. We're going to be loaded at the guard position. He is not taking E"Twaun's job until E'Twaun leaves. Barlow will be more experienced. We'll have LewJack running the point. I can see him taking some of the minutes of Keaton Grant and Chris Kramer. It's hard to judge his defensive performance because North Central was running a press for most of the night and that allowed Danville to great on the break a lot. He did manage a pair of steals.

D'Vauntes Smith-Rivera - 6'4" 219 pounds - Indianapolis (North Central), IN - I might as well say something about Smith-Rivera even though he is only a sophomore. At his size, he is not built like your typical 16 year old. I think he is already nicely polished, and he was a second half difference maker. He had 12 of his 19 points in the second half and played more at the forward position. He'll be a solid 3 in college. I was impressed by his tenacity to battle within 10 feet of the basket. Smith-Rivera worked for his points, and was instrumental in getting to the line in the fourth quarter as North Central maximized every possession. Danville couldn't get close because Johnson and Smith-Rivera either scored after long possession or got themselves to the line.

Smith-Rivera was 9 of 12 from the free throw line. He only had five rebounds, but he blocked a pair of shots and added two assists. He is currently playing second fiddle to Johnson, but will be a hell of a player next year when it becomes his team. Finally, he did try to step out for the three, but was 0 for 3 from long range.

I have said this before, but after seeing Carroll and Johnson in person I am even more convinced. Should JJ, Robbie, and E'Twaun all return I think we will be the favorite for the 2011 National title. Everything seems to be coming together for that. I don't think Purdue will ever have the mixture of talent, depth, and experience that we would have if the Big Three returns. Carroll and Johnson are supreme talents that we can use as added pieces to perfectly compliment the experience we would have. We would also have incredible diversity in the lineup.

Do you want penetrating guards? I give you E'Twaun, LewJack, Barlow, and Terone. Do we want to go big? Fine, we'll play JJ, Carroll, and Bade/Marcius. Carroll and JJ can be great defensive presences down low. LewJack and E'Twaun are already solid defensive guards, while Barlow is getting there. If you want a versatile power forward that can shoot from outside or  drive we still have Robbie with Bade and Hale that can back him up. We would really only lose Kramer's defense (replaceable with LewJack/Barlow/E'Twaun) and Grant's ability off the bench. The incoming Johnsons can replace Grant's production, plus Ryne Smith can be a 3-point specialist. Then there is D.J. Byrd. He can be a tenacious defender, a shooter off the bench, or general role player. I just don't see a weakness.

I admit I was giddy last night after seeing these guys. As good as this season has been, it can be even better next year. Should everyone return the only way I don't see us winning next season's National Championship is if we beat ourselves.

That attitude is already being reflected in these guys. Travis' final note on the night came from his post game handshake with Johnson.

These guys are already focused on being winners. I love it.