That's what she said about the Big Ten Power Rankings

Share All sharing options for: That's what she said about the Big Ten Power Rankings

We have reached the halfway point in the conference season and things are starting to look pretty solid. I think four Big Ten teams will be headed to the NCAA Tournament barring a major collapse. There are three more that have legitimate Bubble chances, while the remaining four are hoping for the NIT at best unless they get hot for four days in Indianapolis. ESPN's first edition of the Bubble Watch agrees with me, putting Purdue, Michigan State, and Wisconsin in as locks with Ohio State all but there. Minnesota, Northwestern, and Illinois are still working, while Michigan, Penn State, Iowa, and Indiana are done.

We don't need to worry about seeding quite yet, but we're getting close. Purdue and Michigan State look like they could each get top 2 seeds if they keep winning. Ohio State and Wisconsin could also end up with top four seeds. It is a tough year, but these four are clearly the best teams in the conference.

Since we're halfway through the conference season, it is the perfect time for a Power Rankings. It has been a few weeks since I have done a power rankings here, but that only means we have reached the third in our Office trilogy of subjects. First we had Creed Bratton, then Dwight Schrute. Now, we have the man himself: The one and only Michael Scott. This could be really hard, but that's what she said. 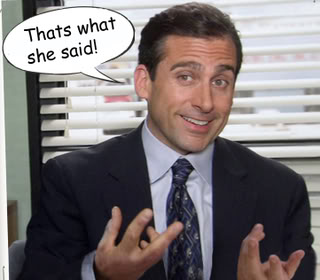