I am looking outside my window and all I see are piles of snow. It is hardly baseball weather, but we're actually only two weeks away from the beginning of the college baseball season. College baseball is helping me keep my sanity at the moment, as it is only 62 days until I leave for Florida for our annual weeklong trip to South Florida for some Hurricanes baseball and sun.The Hurricanes start their season next week, while Purdue must wait until February 26th.

Collegiate baseball is one of the fastest growing sports in terms of popularity and TV coverage. The Big Ten has recognized this by moving its annual tournament to a nice Triple-A stadium over in Columbus. We're even emerging somewhat by having three teams make the NCAA's a year ago. It has still been over 25 years since a Big Ten squad made the CWS, but we're getting there as a conference.

Purdue, however, is still far away. If Miami is one of the gold standards of the sport, Purdue is a mid-major at best. We have one NCAA Tournament appearance ever (23 years ago), we went two and done in that appearance, and we have a Cubs-like streak of 101 years without a conference championship. We have come close to breaking those streaks in the past decade. In 2001 the Boilers started the season by upsetting #1 Rice. They then lost the Big Ten by a half game and probably would have made the NCAA Tournament had we one at least one game in the Big Ten Tournament. In 2008 we were the Big Ten Tournament runner-up, failing to take the automatic bid against Michigan in the championship game.

The 2010 season looks to be somewhat promising. We've made consecutive Big Ten Tournament appearances and we return all three weekend starters from a team that finished 25-26.

Eric Charles - SS, 2B - Charles was a key contributor last year as a freshman and we will need his bat. He batted .371 and produced at the top of the line by scoring 42 runs.

David Blount - SS, 2B - This junior form Miami probably could have played for my wife's Canes if he stayed in town. Blount batted .322 last year and will probably bat pretty early in the lineup.

Drew Madia - 1B, 3B - Madia was second on the team last year with 6 home runs and 32 RBI's. He also provides senior leadership and has been at least a part-time starter since he was a freshman.

Matt Bischoff, Matt Jensen, Matt Morgan - The trio of Matts represent our entire weekend starting rotation a year ago. It is good to have that experience back, but only Morgan had an ERA below five a season ago. Combined they were 14-16 as starters, but another year could make a big difference.

Kevin Cahill - RP - Cahill was one of the Big Ten's best closers in 2009 with six saves. He was also 3-2 in other appearances. 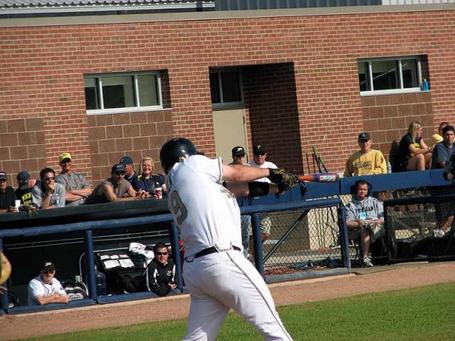 Dan Black - DH - Black was a huge key to our offense last year, batting .310 with 15 home runs and 51 RBI's. He was drafted by the White Sox and advanced beyond rookie league to finish last season at Class A Kannapolis. He was also second in the nation in walks.

Brandon Haveman - OF - Haveman was the Big Ten batting champ a year ago, batting .422. Haveman was also drafted by the Mariners and had a successful rookie league campaign by batting .339 in 29 games at Pulaski.

John Cummins - OF - Cummins batted .400 a year ago, so we basically lost our three best hitters.

I'll say it right now, Purdue will only make the NCAA Tournament if it wins the Big Ten Tournament. The overall schedule is way too weak to consider anything otherwise. The only team we might play that is in the ESPN preseason top 25 is Big Ten favorite Ohio State (ranked 21st). The Buckeyes are the only Big Ten team we do not have a series against, so we would not play them until the Big Ten Tournament.

The season begins in the second annual Big Ten/Big East baseball challenge in two weeks down in the Tampa/Clearwater area. Purdue will play Villanova, Cincinnati, Rutgers, and West Virginia. Our first true road trip is a three game series at Southern Illinois, then we play LeMoyne, Morehead State, and Evansville in an invitational down in Evansville. The Boilers then have two spring break games at Eastern Kentucky and three at Ohio.

The home season begins on March 23rd against IPFW. Illinois comes to town the next day, then we have a four game weekend home series against Chicago State. In late March there is a two game trip to Missouri before the Big Ten season begins at home on April 2nd against Minnesota. The Big Ten season has three game home series against Minnesota, Penn State, Northwestern, and Michigan State, while we must go to Indiana, Michigan, Illinois, and Iowa.

As far as Purdue's overall chances in Big Ten play, they don't look good. Ohio State is the heavy favorite after winning last season's regular season title. They also feature one of the best pitchers in the country in Alex Wimmers, who threw a no-hitter against Michigan last year. Indiana should be a decent team after winning the Big Ten Tournament. Illinois just missed on an NCAA bid last season and had the best out of conference performance when they took two of three games at eventual National Champion LSU. Michigan was down a year ago, but they could take a big step forward. Minnesota won 40 games last year and went to the NCAA's as well.

College Baseball360.com was heavily used for information in this preview, as they are one of the few sites that has done a Big Ten preview so far. They don't seem to have much faith in Purdue in what should be a pretty deep Big Ten, but we should still at least challenge for one of the six Big Ten Tournament spots. Once there, anything can happen.

College Baseball Today has an even better look at the Big Ten overall. The express the same sentiment I have on Purdue. There is potential there, but the Boiler must execute.