Looking ahead to 2012: A trip to see a potential recruit

Share All sharing options for: Looking ahead to 2012: A trip to see a potential recruit

I know I don't talk much about basketball recruiting here because the classes are known well in advance. My colleague over at the Purdue Basketball Blog does an excellent job of tracking recruits, both officially signed and those a few years off. He even has an entire section devoted to recruiting. I am not sure why I haven't said much, especially since I have focused more on football recruits.

There will be more on football later this week as we finally get to signing day, but I wanted to talk about basketball recruiting somewhat because of a game I attended last week. On Wednesday night I went to Chatard to see my old coach, Basil Mawbey, coach a game with Indianapolis Broad Ripple. Coach Mawbey is simply one of the best coaches that has ever paced the sidelines here in Indiana. He came out of retirement this season to take over at Broad Ripple and he has a very talented young team. The Rockets have just one senior and they recently won the Indianapolis City Tournament.

One of the biggest pieces on that team is 6'3" sophomore guard Ron Patterson. I was hoping to see 6'7" Steven Jamison, but he has been out with an illness of late. Patterson has been rumored to be in the mix for our 2012 class. Currently, we are full there, but with 16 year olds that can always change in the year and a half before they can officially sign. Because of that, it is a good idea to keep an eye on Patterson. 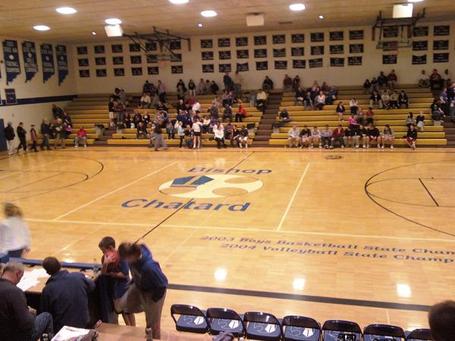 Investigative journalism at its finest

He was off on this night though. I don't know if it was fatigue after playing four games in four days to win the city tournament, but something wasn't quite right. He only scored two points in the first half as he sat the bench in foul trouble. He would only finish the night with nine points, but he had seven in a key 15-0 run where Broad Ripple took control of the game in the second half. He scored those seven points on a pull-up 3-pointer and a couple of nice drives.

Patterson showed me that he can take over a game at any time. He has supreme athleticism and speed that allows him to dominate like few others can. At 6'3" he won't have as big of an edge at the next level, but if he can harness his physical gifts it will make him better. That is why it is a very good thing that Mawbey is currently his coach. Broad Ripple has a lot of talent, but it is still very raw. If Mawbey stays for a few more seasons his discipline will wear off on all of those players and they will become more well-rounded for the next level.

Patterson has a lot of spring in his leap. He can elevate above most players to give his jumper more lift. He also is a solid rebounder and looks to make the extra pass on the break. His first step is pretty good, though Chatard hardly has the athletes he will see at the next level. He is helped by having a solid young point guard in Aaron Payne, who should get some attention in his own right. Patterson was content to let his teammates do a lot of work instead of forcing things because he was the big name. I like that in a player, especially since Basil Mawbey coached teams normally have one main scorers, a secondary scorer, and a bunch of guys that contribute 4-8 points per night. As a sophomore he is already emerging as a leader of that team, which is good because they have only one senior.

Coach Mawbey has a history of developing division I talent too. At Kokomo he sent Brian Hogan to Florida, Brian Reeves to Arkansas State, Lee Coomler to Morehead State, and Blair Crawford to IUPUI just to name a few. He also sent a ton of other players to smaller colleges too. After moving to Lewis Cass he won another state title and sent a few kids to college on Division I scholarships at a school that had marginal basketball success at best before he got there. All of those players were disciplined, polished basketball players that had solid fundamentals. Patterson may be one of the better players he has coached in terms of raw talent, so those skills should benefit him more if he learns them from coach Mawbey.

Patterson is definitely a player to keep an eye on even if our class is already full. I have already seen a few other division I recruits this year such as Austin Etherington at Hamilton Heights, Ethan Jacobs at Tipton, and Jesse Berry at Lafayette Jeff. Patterson is the best I have seen in person so far this year.