Wins Here and There

Share All sharing options for: Wins Here and There 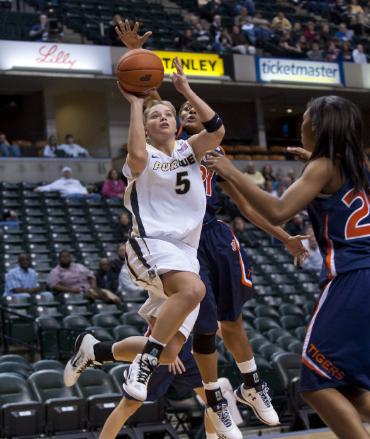 Purdue handles Auburn in Boilermaker Blockbuster, runs over Southern Illinois, then squeezes past Gardner-Webb on the road.

What with the recent flurry of games, I'm multi-task-posting again.  Anybody noticing a pattern here?  Anyway, the Boilers have righted the ship in style after a tough 3-game slide.  They are now effectively done with the non-con schedule, with only a home date with Western Illinois left before Big Ten play.  Also, Drey Mingo is back, although not up to full speed, and Ashley Wilson is back into the rotation.  We're getting healthy and heading in the right direction.  I'll post a fuller reflection on the first 10 games in a few days, but all things considered, we're in a pretty good place right now.

This is a solid win over a power conference team, albeit a 4-6 one.  The Tigers have some good size up front, someting we've not seen a lot of so far.  We still outrebounded them 42-33, which is very good to see.  It means we can still rebound against teams that we can't simply out-athlete.  We also took care of the ball decently well, and our offense looked much smoother than it has, especially in the losing streak.  Alex Guyton had a very good game, scoring 14 and pulling down 9 rebounds to go with a pair of blocks and 4 steals.  Courtney Moses was sharp as well, with 12 points and 4 assists.  And last but not least, Drey Mingo returned.  She got a nice hand from the crowd, and was able to contribute 2 points and a board.  She is nowhere near full strength, but to be back at all less than 3 weeks after a life-threatening case of meningitis is incredible.

Brittany did not exactly fill out the rest of the scoresheet, but 25 points is more than enough to be classified as POTG-worthy.  She was in E'Twaun mode, scoring both without becoming a possession sink and seemingly at will.  I really don't have all that much to say about this performance, save that it was exactly what we needed in this game.

This was simply a walkover.  Southern has no business being in a game with us, and both teams knew it.  We held them to just 27% shooting, ran our offense well and coasted to the win.  Every player who dressed scored, and all but Chantel Poston grabbed at least one rebound.  It is hard to glean much from a game like this, other than to say "it was good."  Chelsea Jones had a nice game, scoring ten.  She has been a little lost in the rotation recently, so it was nice to see her break out a bit.  Alex Guyton continued her hot streak with seven points and 13 boards.

The freshman led the team in scoring and assists while playing solid defense.  She had only a pair of turnovers and played a clean game throughout.  As I've mentioned before, the assists are more important in my opinion, as we do not need her to score.  We need her to run the offense and take care of the ball, and she did both of those things well against SIU.

This was a huge game.  After letting the Maryland game slip away and getting blown out twice on the road, this was an important step for this team.  It is hugely important to get some experience in close games before the Big Ten season, and after the Maryland game, the team needed to exorcise some demons.  Brittany Rayburn was huge, pouring in thirty points and nailing an ice-in-the-veins three to win the game.  Moses had 8 points and 4 dimes.  Team rebounding was excellent, with 6 players grabbing 4 or more boards.  Most of all, though, it was important to get a road win.  After the struggles this team has endured on the road, it is good to get a road win early in the year.  And, for those of you who are thinking "it's just Gardner-Webb," they were a tournament team last year, were 7-3 coming in, and beat us by one on our floor last year.  It was nice to return the favor.

Who else?  JJ is not the only one around here who can carry a team.  The team clearly needed her to step up in this game, and did she ever.  When you're on the road and out of your element, you need to be able to turn to your best players.  To have the moxie to go for the win with 16 seconds left rather than try to get to the rim for a foul speaks volumes about her confidence.  In a word, clutch.