It Takes a Village to Replace a Hummel, Kramer, and Grant

Share All sharing options for: It Takes a Village to Replace a Hummel, Kramer, and Grant

Since nothing gets done in the business world during the Holiday season, I've opted to use Microsoft Excel for something interesting in place of my usual mind-numbing number crunching.

This post takes you through my entire thought process, so it's going to get ugly. It's a little scattered and possibly unintelligible in some places. Please do not read any further if you are (or may be) pregnant or prone to seizures.

As I stated above, I started out simply trying to visualize how Byrd, Smith, and Hart have progressed from last season to this season. With the non-conference schedule (less WV) in the books, I figured it was a reasonable enough sample size to make a somewhat legitimate comparison. (Note: I understand the stats I am using are just the non conference schedule, but it's obviously the best we have thus far.)

I added up the total changes from all three players together so that I could quantify the overall changes from the previous season. (I left out the field goal percentages because I don't want to add any confusion with % change calculations...And because I am lazy)

After I added the trio together, I realized that collectively their improvements have been very impressive in almost all areas. If these improvements were the stat line of a single player, you'd be looking at the infamous "third scorer."

Since it's customary to mourn Robbie Hummel's injury at least once every 2 hours, I naturally began wondering how Smith, Hart, and Byrd's improvements have stacked up against the hole left by RH.

Statistically speaking, Smith, Byrd, and Hart have each improved enough to fill the majority of the gap left by Hummel, but their improvements didn't fill the hole in its entirety.

Since E'Twaun Moore and JaJuan Johnson have both elevated their games to new levels in Hummel's absence, I wondered how things would look if we added their combined improvements from last season.

Ok, so now that we have arrived at the fact that Smith, Hart, Byrd, JJ, and Smooge have made enough improvements from the previous year (so far) to cover the gap left by Robbie Hummel. The only remaining gaps are .13th of a rebound and .57th of a block, which are pretty trivial.

Not too bad considering that Robbie Hummel's stat-stuffing stat line was nearly completely compensated by the collective improvements of 5 players.

This lead me to a few more considerations:

1.) This doesn't take in account the improvements (or regressions) of Lewis Jackson, Patrick Bade, or Kelsey Barlow.

3.) What happens when you factor in the loss of Chris Kramer and Keaton Grant.

Well, since we've come so far, I've bypassed my lunch break to take a look at some of these considerations as well...

1.) Here are the season improvements (or regressions) of LewJack (in his 16 games), Barlow, and Bade: 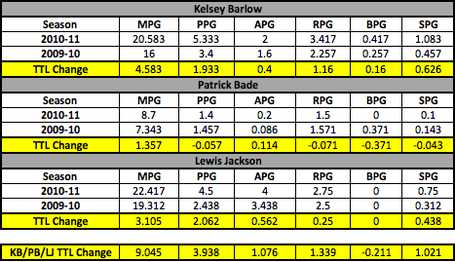 2.) And here are the combined efforts of Terone Johnson, Travis Carroll, and Sandi Marcius this season:

3.) And here are Kramer and Grant's lines from last season:

Now lets put it all of this together in one glorious graphic and see how Purdue is handling the loss of Kramer, Hummel and Grant. (Note: I am not oblivious to the fact that all of these guys do things that don't show up in the stat sheet. Unfortunately, those things - by definition - are unquantifiable.) 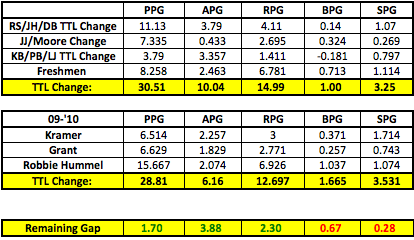 So what can we conclude from all of this?

1.) I have way too much time on my hands

2.) The incremental improvements of the entire team, along with freshmen, have together found a way to compensate for nearly all of the production of 3 year starter Robbie Hummel and (4 year starters) Chris Kramer and Keaton Grant for the first 12 games.

Many of the improvements on this team have been so gradual that they haven't been fully appreciated. However, when put together, it's obvious everyone is doing what they can to win games. We've obviously had to witness a few growing pains along the way. This is expected for a team playing 3 freshmen (kind of) and 2 sophomores in their regular rotation.

As the schedule gets exponentially more difficult, the true test will reveal just how far this team has really come. But make no mistake, the team's current success has been a TEAM effort, not just that of Moore and Johnson.

Ok, now back to work for this guy.