Meet Your Boilermakers, Part 2 - The Forwards

Share All sharing options for: Meet Your Boilermakers, Part 2 - The Forwards 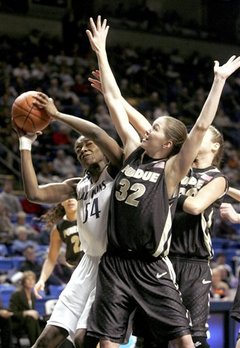 Last week, we took a look at the guards for your 2010 team.  This week, we'll look at the frontcourt, and I'll have the advantage of having an exhibition game to give me a chance to see some of the new faces.  As a whole, this group is largely interchangeable parts, to one degree or another, and I don't mean that in a bad way.  All but Ashley Wilson are between 6-2 and 6-4, and roughly the same size. Expect to see heavy rotation at all spots with most of these players.

Our second transfer to become eligible this year, Drey comes to us via Maryland.  We all saw what she did against Parkside, and I think everyone was impressed.  An All-American coming out of high school, she struggled to find playing time at UM, and no one really knows why.  Their loss is our gain, though. A long, athletic forward with some nice post moves, she also showcased a solid midrange game Monday night. 8-for-12 shooting with a 3 is efficient by any standards, and she also added 7 boards.  She should be a key contributor in the frontcourt this year.  If she can average 12 and 7 a game, we should be in excellent shape.

In the interest of full disclosure, I should say that Sam is my favorite player on the team.  She is an absolute joy to watch play.  She always, always plays hard, her basketball IQ is excellent, and she always looks happy to be playing the game, even when she struggles to find playing time.  And we both play tenor sax.  What more could you want?

Anyway...Sam was the definition of Run, Rebound, Defend last year.  She led the team in rebounds despite playing only 17.6 minutes a game.  (Pause for effect.)  She also can score a little, but she's primarily on the floor to rebound. She has tremendous reach that she uses to keep offensive boards alive, and she is very good about going up and securing the ball with both hands.  On top of that, she was a 3-time state champion in high jump back in high school, so there's no shortage of bounce here.  Her passing is also excellent, and she would have more assists and fewer turnovers were her teammates not frequently surprised by her passes.  If you are open, she will find you, so you better have your head on a swivel.  She should be a huge part of this team's success this year.

The team's only natural center, Chelsea provides some important size down low. She has the strength to match up with the bigger centers around the league, and in the Boiler's trademark man-to-man, she's often left alone with the opposing center. She probably has the best back-to-the-basket game on the team, although she tends to kick out more often than going to the hole, which I am fine with.  As rough and dirty as it gets down low in women's games, any shot where the defense has a chance to set is an adventure, and the driving guard is probably more likely to both hit the shot and draw the foul.  That said, she can score if the opposition doesn't respect her, so she is not a liability on the offensive end.  She is also a solid if unspectacular rebounder.  She's not athletic enough to go way outside her area, but she boxes out well and gets her share.

Alex struggled with injuries last year, mostly with a stress fracture in her left leg.  Even in the 22 games she was able to play, she was not really at 100%.  Similar to Mingo, she is very athletic, and has been working to develop her post game.  While she does not have Drey's range, she is a tenacious defender under the basket.  Her contributions were key last year in holding Big Ten Player of the Year Jantel Lavender to 6 of 18 shooting in the upset of Ohio State. If she continues to play defense like she did last year when she was at full strength, she will be valuable to this team without ever scoring a point.

Ashley is a bit of a player without a position.  She played in the post through high school, but is undersized for a college forward.  Last year Coach Versyp tried to move her to guard, but she is listed at forward this season.  I honestly have no idea what her role will be this year.  Unless she has taken a few thousand shots in the off-season, she doesn't have the range to be a swingman, but remains undersized for a 4.  It will be interesting to see how Coach Versyp works her in this year, but I can't even pretend to know what she should do here.  And on top of all that, she's recovering from 2 surgeries to repair a stress fracture in her foot, and will be out at least another week.  After that it's anybody's guess how long it'll take her to get back to 100%.

Sam is solid wing player, and a good fit for the SF position.  She has good range on her jumper, she's got a good wingspan, and she runs the floor well.  She was actually the best 3-point shooter percentage-wise last year on 17-for-38 shooting.  She didn't force them up, obviously, being content to stay in the flow of the offense.  This is the one area where there is no heir apparent to a departed senior.  Jodi Howell was deadly from deep last year, and no one really came close to matching both her volume and accuracy.  Ideally, the 3s will come more by committee this year, and Sam should be a part of that, along with Brittany and hopefully KK.  She should be a contributor on the boards as well.  In short, she's a little bit of everything, just like you want from a SF.

As a whole, this frontcourt reminds me a little of Michigan State's, in that there are not a lot of traditional post players, but a wealth of talented swing players to crash the boards and run the floor.  If this group can rebound effectively, it will eliminate a major weakness of last year's team.  If they can score like they are capable of, it should take some load off the guards. There is a good mixture of new pieces and old, and the depth alone here should allow us to wear down most teams.  Last year we missed that.  If this group can fill that hole, we should be in excellent position to go far in tournaments and title races alike.